Both the judge who sentenced her, and the Prosecutor's Office that requested the sentence, declared themselves during the processing of the pardon against returning María Sevilla to her homeland... 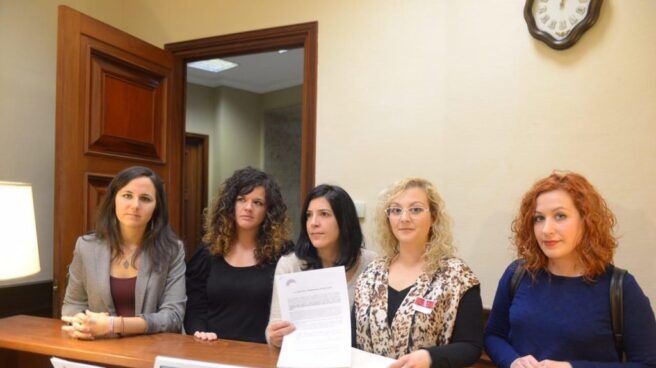 Both the judge who sentenced her, as well as the

's Office that requested the sentence, declared themselves during the processing of the pardon against returning to

the custody of the son she kidnapped for several months, but the

has gone over, He has ignored the criteria of both and condoned this sentence on Wednesday for 180 days of work "for the benefit of the community."

Thus the Executive -of which, for example, Ione Belarra is minister, who took Seville to

in 2017 to talk about abuses in the family sphere- has pardoned the woman for half a year in prison to avoid her entry into prison (two years and half passed the sentence to two, which will not be served due to lack of records), and has returned the custody of the minor, which the Justice had taken from her for four years for the damage caused by her to the child, whom she kept for two years away from his father, indoctrinating him in the evangelical faith, without medical or school care.

EL MUNDO has had access to the documents in which both the judge and the Prosecutor's Office made their opposition to the clemency measure clear, since the woman continued to have obligations, but above all rights, with respect to her son.

In short, they preferred that these powers be held by the father, who even so from the Executive continues to be linked with "sexist violence" - minister Irene Montero yesterday -, despite the fact that all the complaints against him filed by Seville have been Shelved due to lack of evidence.

Now, in fact, he has acted against his ex-wife for false accusation and procedural fraud.

The judge and prosecutor estimated, in fact, that there were no reasons to revoke the conviction in this regard, and in reality the Government has not justified why it does not follow its criteria and grant that specific pardon, beyond explaining that it does so in response to "criteria of justice and equity", and "considering the reports of the sentencing court and the Public Prosecutor's Office", according to the decree signed by

A non-binding criterion that, having seen what has been seen, the Government considers but does not second.

In fact, the titular magistrate

of the Criminal Court 23

of Madrid made it very clear that "pardon should not be applied" regarding the sentence to the loss of parental authority for four years since, he wrote, the "allegations" of María Sevilla do not show that there is a prejudice in their compliance, ”says the order, in which the judge showed his position on the pardon request, dated March 31.

That is to say: Seville alleged that this part of the sentence caused her harm that the judge did not see as certain given that, the document continues, even without parental authority she was at that time “visiting her son at the

( Malaga)”, where the minor lives with his father and recovers from the damages suffered during the abduction committed by his mother.

Strictly, then, the judge then reported "UNFAVORABLE" (thus, in capital letters) about the remission of the disqualification of the parental authority of Seville with respect to his son.

For him, as he left in writing, "there are no extraordinary and exceptional cases that make the execution of the sentence essential."

The Prosecutor's Office also expressed itself in writing against the remission of said penalty, remarked that the withdrawal for four years was "the minimum applicable to the present case", and concluded with a reason of a practical nature: when said disqualification ended, explained the Public Prosecutor's Office, "The minor will already be of legal age."

In other words, Sevilla was kept away from her son in terms of her rights and obligations of protection until he was already an adult, could fend for himself and was less vulnerable to the potential harm that his mother could cause him, who For part of the feminist movement, she is instead a heroine in the fight against patriarchy.

The Prosecutor's Office even pointed out one more reason for granting a partial and not a total pardon to Seville: to avoid a public feeling of impunity that encourages the commission of new crimes, ”the prosecutor of the case left in writing.

That he added: "Especially when as a result of these and other similar events it seems that civil society is encouraging campaigns such as the so-called 'I Would Do It Too', which the press echoes and which seems to encourage similar actions."

Hundreds of feminist associations asked for a pardon for María Sevilla, and her concession, even partial, was greeted, for example, by the Minister of Equality, Irene Montero, who branded the condemned woman a "protective mother", as "patrimony of the feminist movement".

The accusation maintained by the father in the case of the abduction of the minor is now being considered to appeal the granting of a partial pardon, as this newspaper has learned, since the Government has not substantiated the remission of the disqualification of parental authority, and by doing so, in addition against the discretion of the judge and prosecutor.

These reports are not, however, binding in any case, but the Executive must justify and explain the reasons for granting the pardon: that could be the basis for the appeal.