A medical team in a private hospital in Dubai was able to save the life of a 71-year-old patient, who was suffering from complete heart failure and was threatened with sudden cardiac arrest and certain death. 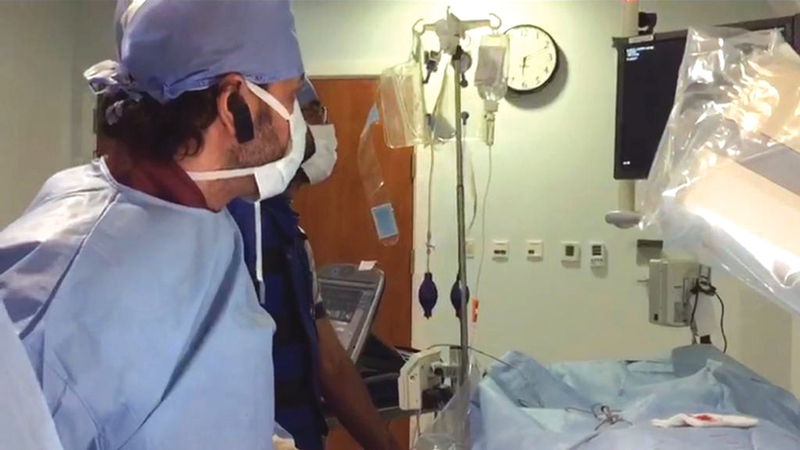 A medical team in a private hospital in Dubai was able to save the life of a 71-year-old citizen who was suffering from complete heart failure and was threatened with sudden cardiac arrest and certain death.

The medical team, led by Emirati doctor Abdullah Abdul Rahman Al-Hajri, a consultant cardiologist, performed a complex surgery to install an innovative global medical technology for the citizen to improve heart performance and protect it from cardiac arrest.

Al-Hajri said: "The patient arrived at the hospital bedridden and unable to move due to the accumulation of fluids in his body and due to heart failure and a significant decline in his health."

He added, "A complex operation was performed for the patient to install a precise device, used for the first time in Dubai, consisting of three wires and a four-polar cable extending from it to send impulses from different points to the right ventricle, right atrium and coronary vein from the heart."

He explained that the device includes six sensors that monitor the performance of the heart muscle and send signals to the medical team treating it to follow the patient during his normal practice and monitor any abnormal impulses that threaten the patient's life for the medical team. The device gives treated electrical impulses in the event of a heart stop.

The device is distinguished by its battery life of more than 14 continuous hours, which is much longer than the usual time for this type of device.

He stated that the device treats heart failure by restoring the movement of the heart muscle by giving simultaneous pulses in three of the heart chambers at the same time, which allows the heart muscle to recover and restore movement and blood-pumping function, and the device allows predicting the level of improvement for the patient and informing the doctor of that.

Al-Hajri pointed out that the surgery, which lasted three hours, is unique, given the patient's health condition, which was described as a hopeless case, given the use of global technology to restore heartbeat.

He indicated that the operation was successful, and the patient regained his activity and ability to move, and returned to his home and family.

A prestigious international health magazine praised the citizen doctor and the success of the surgery, stressing that it saved the patient's life from certain death.

And the British magazine "Health" stated that the doctor Al-Hajri, who performed several similar operations in the country and the United Kingdom, succeeded in installing the device for the first time in Dubai, which saved the patient from heart failure and sudden cardiac arrest, noting that the success of this surgery is an achievement. Medically and as evidence of the advanced health level and the distinguished level of medical cadres in the UAE.