Al Hammadi: Monkeypox infection begins with the onset of symptoms

A consultant dermatologist and associate professor at the Mohammed bin Rashid University of Medicine and Health Sciences, Dr. Anwar Al-Hammadi, confirmed that monkeypox disease is limited in prevalence, and it begins to transmit from one sick person to another infected, starting with the appearance of symptoms on the patient, especially with the onset of the rash, or 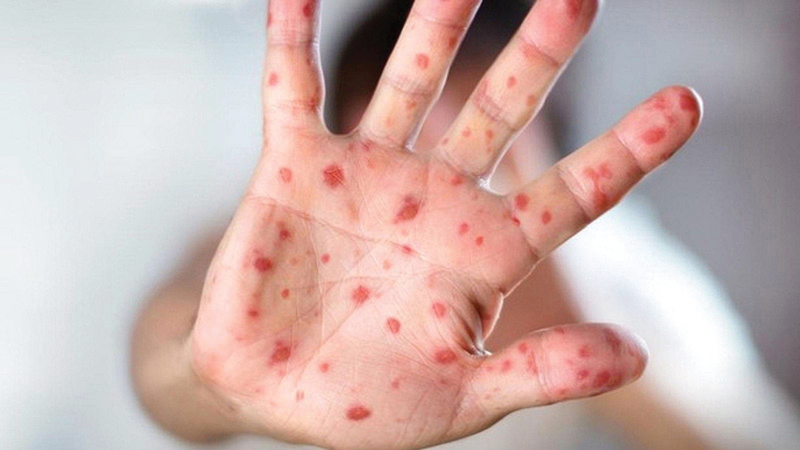 “World Health”: the risk of disease is low, and most of the injured recover without treatment

Al Hammadi: Monkeypox infection begins with the onset of symptoms

A consultant dermatologist and associate professor at the Mohammed bin Rashid University of Medicine and Health Sciences, Dr. Anwar Al-Hammadi, confirmed that monkeypox disease is limited in prevalence, and it begins to transmit from one sick person to another infected, starting with the appearance of symptoms on the patient, especially with the onset of the rash, or Two days before its appearance, he confirmed that those vaccinated against smallpox in their childhood had a lower risk of disease by up to 85%.

Al Hammadi explained to “Emirates Today” that the spread of monkeypox infection is very limited, if compared to the rate of spread of the Corona virus, as the transmission of infection requires contact and close contact between the injured and the healthy person, whether through mouth spray, and bed sharing for a long time, as well as the appearance of the rash. The skin of the injured person until it dries completely, as these grains are full of water loaded with infection.

He pointed out that the most dangerous period of infection is in the period of skin rash, which ranges between two to three weeks, and during this period the patient must remain in quarantine, away from others, until the pills disappear from his body completely.

While the Regional Director of the World Health Organization, Dr. Ahmed Al-Mandhari, stressed during a press conference yesterday on the sidelines of the 75th session of the World Health Assembly currently being held in Geneva, that the risk of monkeypox for the general public is low, and most of the infected people recover without treatment within a few weeks.

He added, "At this stage, monkeypox can be contained in the Eastern Mediterranean Region. Monkeypox is transmitted through close physical contact with an infected person, and this means that health workers, family members, and sexual partners are more at risk."

Al-Mandhari stated that over the past weeks, 157 confirmed cases of monkeypox have been reported worldwide, including one case in the Eastern Mediterranean Region.

"Reporting monkeypox cases in non-native countries is a stark reminder that the world will continue to face emerging and re-emerging disease outbreaks, and the key lesson here is that countries must continue to strengthen and invest in preparedness and response capabilities," he said.

And health authorities in the country identified six ways to prevent monkeypox, and confirmed that most cases recover spontaneously, and that symptoms usually disappear within two to four weeks.

She explained that the six prevention methods are to avoid unprotected sex, as international reports on recorded cases indicated that transmission was linked to sexual practices and networks, as well as avoiding contact and sharing of personal items such as towels and bed covers, and wearing gloves and protective equipment when caring for patients.

The Ministry of Health and Community Protection stated that there is an antiviral drug that is used in a small range according to the severity of the case, and with regard to the vaccine against the disease, it is used after exposure to infection, to prevent the transmission and spread of the disease, which is the third generation of the smallpox vaccine, and is no longer widely available.

The ministry pointed out that it took the initiative to study and assess the risk of the epidemic locally, according to the volume of international travel, and to issue a circular for medical staff working in the country to work on discovering cases and reporting them to the concerned health authorities.

The Ministry has also developed mechanisms for laboratory diagnosis of suspected cases with the required speed.

The Ministry of Health and Community Protection and the health authorities in the country are strengthening epidemiological surveillance to ensure the rapid detection of cases and work to prevent the local spread of this virus, as it is the best way to prevent the spread of the disease.

For its part, the Dubai Health Authority explained that the most prominent symptoms of monkeypox and clinical signs of the disease are fever, extreme fatigue, swollen lymph nodes, back and muscle pain, severe headache, and rash, which usually begins within one to three days of fever. .

The authority confirmed that the incubation period for the disease, which is usually the interval between infection and the appearance of symptoms, ranges from six to 13 days, and can range from five to 21 days.

■ Wear gloves and protective equipment when caring for patients.

■ Cook all animal products before eating them.