The Worst School Massacre in a Decade, the Next Generation's "American Nightmare"

China News Service, May 26 (Reporter Meng Xiangjun) On the 24th local time, the headlines of major American media were dominated by the same incident, that is, a shooting incident at a primary school in Texas, USA, which has caused at least 21 people so far. dead, most of them elementary school students.   While many in the United States have called for immediate action, gun control reform has 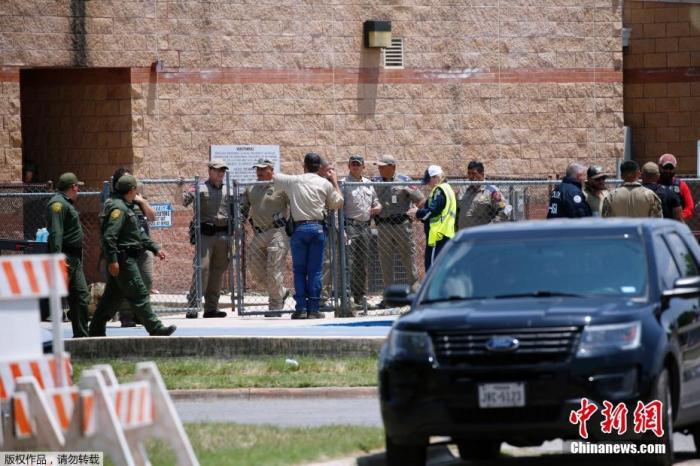 China News Service, May 26 (Reporter Meng Xiangjun) On the 24th local time, the headlines of major American media were dominated by the same incident, that is, a shooting incident at a primary school in Texas, USA, which has caused at least 21 people so far. dead, most of them elementary school students.

While many in the United States have called for immediate action, gun control reform has never been able to reach the deepest depths in a country with 1.2 weapons per capita.

Those who pick up the guns, and those who are targeted, are the next generation of America - teenagers.

In the shadow of multiple school shootings, the "American nightmare" is reincarnating.

On May 24, local time, law enforcement officers went to the scene of a shooting at Rob Elementary School in Uwald, Texas, USA.

The otherwise peaceful school day was shattered by gunfire.

Rob Elementary School in Uwald, Texas, USA, is in danger.

19 pupils and at least one teacher were killed at gunpoint, never able to turn to the next page of their textbooks.

The gunman who broke into the campus and killed wantonly was only 18 years old.

Two law enforcement sources told CBS the suspect was in possession of a pistol, an AR-15 assault rifle and high-capacity magazines.

According to reports, the gunman opened fire on his grandmother before heading to the primary school where the incident occurred.

His grandmother has been sent to San Antonio, the second largest city in Texas, for medical treatment. "Currently, she has vital signs and is still persisting."

Texas Governor Abbott said at a news conference that the suspect in the incident was local 18-year-old Salvador Ramos (Salvador Ramos), who has died.

It is very likely that he was killed by the police, or he committed the crime alone, and no accomplices have been found so far.

[Many former U.S. presidents voiced Biden's order to lower the flag at half-staff]

U.S. President Joe Biden, speaking about the shooting, described the school shooting as a "massacre", called on the nation to pray for the victims, and asked: "When will we stand up against the gun lobby? "

He said it must be clear to every elected representative (member of Congress) in the United States: "It's time to act."

Biden ordered the U.S. flag to be flown at half-staff until sunset on May 28, local time, "to show respect for the victims."

Texas Governor Abbott also ordered the state's flag to be flown at half-staff to mourn the victims of the shooting.

Dignitaries in the United States and Canada have condemned the shooting, including several former U.S. presidents.

"As a nation, we have to have the courage to act," Harris said.

Former U.S. President Barack Obama tweeted that nearly 10 years after Sandy Hook and ten days after the events in Buffalo, "our country is paralyzed."

He blamed the gun lobby and the Republican Party for not showing the will to act to prevent the tragedy.

Former U.S. President Bill Clinton also said, "We owe these families, and we owe families who have experienced similar harm... Enough is enough, and the vast majority of Americans agree with this point of view."

"Canadians mourn with you, and our thoughts are with you," he said.

Regarding the details of the shooting, Texas Department of Public Safety spokesman Olivares said the gunman "started shooting at children, teachers, and whoever got in his way as soon as he entered the school."

A woman disclosed to US media that she and Ramos were classmates, "I took a math class with him" and "he was very quiet in class", but she was not very familiar with him.

The US media also disclosed that hours before the shooting, a social media account suspected to be held by Ramos had sent a message to a teenager in Los Angeles, saying that he wanted to share a "little secret" with him and claimed "I'm going."

The teen said he barely knew Ramos, but had been randomly flagged by him in pictures of guns before.

Ramos, the suspect in the shooting at Rob Elementary School in Uwald, Texas, and the weapon he purchased.

The tragedy at Rob Elementary School in Uwald became the worst school shooting in the United States in nearly a decade.

The last incident of its kind was the 2012 shooting at Sandy Hook Elementary School in Newton, Connecticut.

Another Texas school, Santa Fe High School, also had a mass shooting in 2018, killing 10 people and injuring 10 others.

In fact, the Rob Elementary School shooting came just 10 days after the mass shooting of 13 casualties near an African-American community in Buffalo, New York.

Looking at several incidents, it is not difficult to find some commonalities:

The gunmen who carried out the attacks at Rob Elementary School in Uwald and Buffalo were both 18 and just coming of age.

Sadly, it is likely that these legally purchased guns claimed the lives of more than 20 people.

What's more, there are loopholes in the relevant regulations, such as the shooter of the Santa Fe High School shooting was underage, 17 years old.

The shooter of the Sandy Hook Elementary School shooting that shocked the United States was only 20 years old.

2. The shooters were all pre-planned and fully prepared.

The gunmen in these shooting incidents did a lot of careful preparation before launching the attack.

He also wore a helmet with a camera and briefly broadcast the murder.

On May 14, local time, a mass shooting occurred in a supermarket in Buffalo, New York, USA, and the police cordoned off the scene.

3. The shooter is deeply influenced by the Internet.

Whether the shooter at Rob Elementary School, the city of Buffalo, or the Santa Fe High School shooting incident, they have posted anti-social, gun violence-related remarks, images, etc. on their suspected social media accounts.

Some of these releases are also considered to be similar to "criminal declarations" and have become one of the directions of the police investigation.

The home of the gunman in the Sandy Hook Elementary School shooting was also found to have a variety of game software that promoted violence.

Fourth, there are similarities in the character characteristics of gunmen.

Although these gunmen are young, they are extremely destructive.

However, in several incidents, family members or people close to the gunman often said afterwards that they never thought "people they knew" would do such a thing.

Some respondents gave the gunman a similar character label.

These events span nearly 10 years, but there are still many commonalities.

Whether it is easy access to and possession of guns, or the spread and beautification of violence and extremism on the Internet, or the catalyst for school bullying or violence, what makes the American teenagers in the "flowery and rainy season" finally decide to take action Guns, open fire?

When will the United States understand that unresolved problems will not disappear over time, they will only reappear at a different time and place, and even intensify.

[Why does the crime rate increase the nightmare cycle?

The Texas school shooting happened just a day after the FBI released its report on the shooting.

In Biden's view, the problem of gun violence in the United States "is an epidemic, an international shame."

Biden was serving as vice president in the Obama administration when the Sandy Hook Elementary School shooting occurred.

CNN disclosed that Biden, who had just returned from his Asia trip this time, was on Air Force One to prepare for his speech on the Texas school shooting. After mentioning the Sandy Hook Elementary School shooting, he failed. The failure to pass any gun safety bill in the U.S. Congress resulted in "disappointing consequences" after securing enough support from lawmakers.

The Second Amendment to the U.S. Constitution states that "the right of the people to keep and bear arms shall not be violated".

It is this one that keeps the country in a perpetual cycle of nightmares.

Data map: A large number of weapons are displayed at the Connecticut gun fair in the United States.

Interest groups such as powerful gun-owning groups and the lobby groups behind them have historically fought against the Democrats where Biden and Obama are.

The National Rifle Association, which has about 5 million members, has always adhered to the concept of "everyone owns a gun to promote social safety."

For example, this time, Texas Republican Senator Ted Cruz described the incident in the state as "horrific".

But he, along with some Republican lawmakers, warned Congress against legislation on gun control.

"The immediate solution for Democrats and many in the media is to try to limit the constitutional rights of law-abiding citizens," he said.

Data map: On December 18, 2012, the funeral of the victims of the Sandy Hook Elementary School shooting in the United States was held.

And just three months ago, the families of some of the victims of the Sandy Hook Elementary School shooting finally reached a settlement with firearms manufacturer Remington Arms after years of hard-fought lawsuits, winning a total of $73 million in compensation.

This money is the "valuation" of the lives of the American people.

Shooting Happens - Condemns Shooting - Social Debate - Pushes Legislation - Fails to Pass - Gun Violence Continues - Shooting Happens, Neither Biden nor any other President of the United States has been able to dismantle this existence. The long-standing "weird circle".

In the end, it was the heartbroken American people who took it all.