The general meeting of TotalEnergies disrupted by demonstrators

Around 200 demonstrators blocked access to the TotalEnergies general assembly on Wednesday morning, hoping to cancel the meeting. They criticize the group for its use of fossil fuels and its presence in Russia, despite the war in Ukraine. If the climate strategy has been adopted by the shareholders, it is not yet enough for the environmental activists. 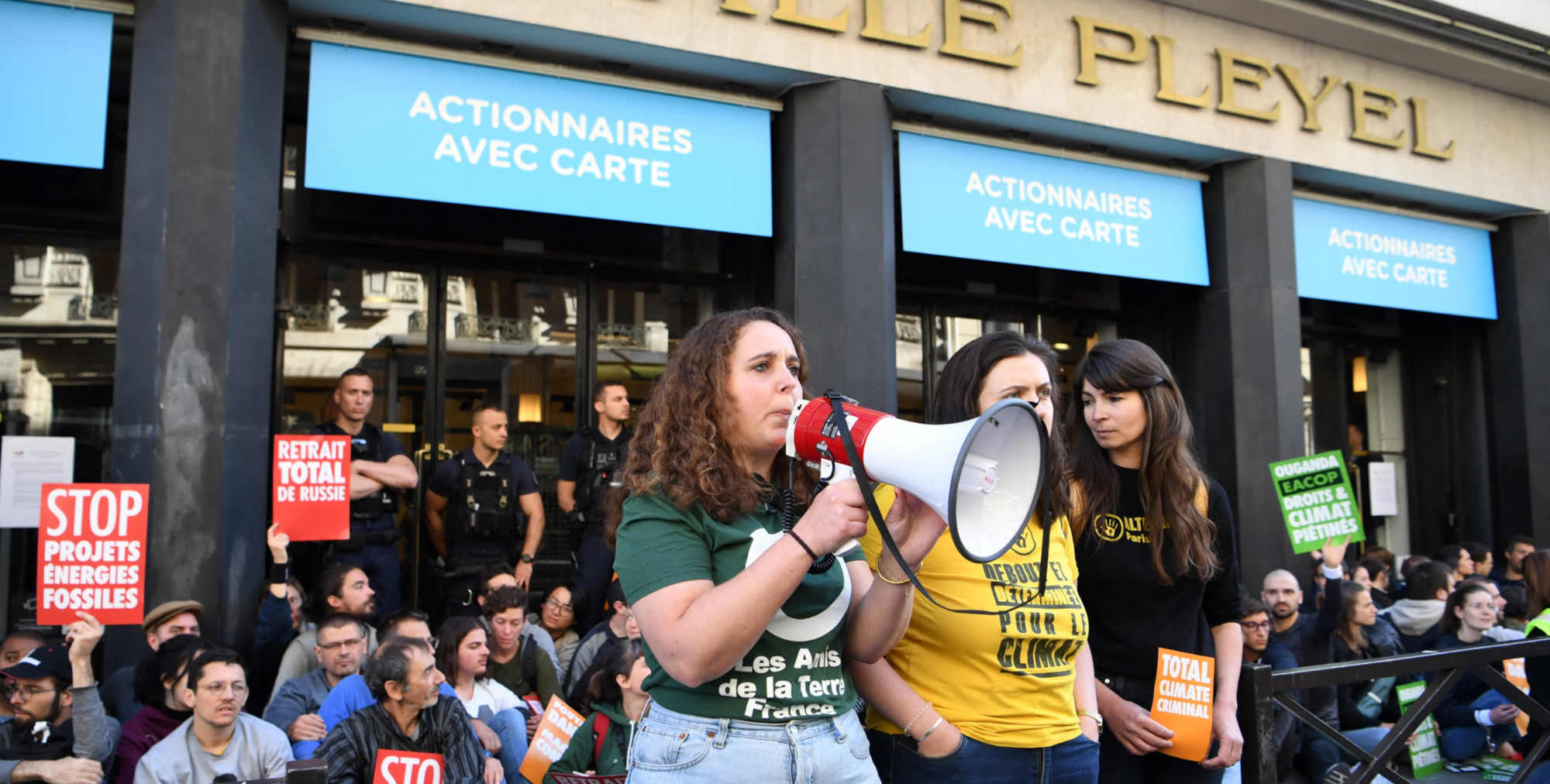 Around 200 protesters blocked access to the TotalEnergies general assembly on Wednesday morning, hoping to cancel the meeting.

They criticize the group for its use of fossil fuels and its presence in Russia, despite the war in Ukraine.

If the climate strategy has been adopted by the shareholders, it is not yet enough for the environmental activists.

Started under high tension with shareholders blocked outside by demonstrators, the general meeting of TotalEnergies ended in the middle of the day on Wednesday with a large vote in favor of the climate strategy of the French gas and oil giant, denounced by environmental NGOs and several small shareholders.

Nearly two hours before the start of the GA, about 200 activists overtook the security guards present.

They installed themselves, even chained in front of the doors of the Salle Pleyel in Paris to prevent access to shareholders and thus hoped to block the holding of the annual meeting.

Others have deployed a large banner "stop fossil fuel projects", in Angola, Tanzania or Mozambique where the group is established.

The climate strategy adopted by nearly 89%

At the opening of the session, which was therefore held "in camera" and online, CEO Patrick Pouyanné apologized to the shareholders who were unable to access the room.

Less than fifty of them, who arrived early, were able to attend.

"The session can take place normally," he nevertheless said.

"More than 28,000 shareholders are present, represented or voted by mail, representing a quorum of 68.87% of shareholders," he said.

The GM ended around 1 p.m. with a vote on a resolution on the group's climate strategy, adopted by nearly 89%, however down compared to 2021. "The shareholders support the strategy implemented at a very large majority", welcomed Patrick Pouyanné.

For the NGO Reclaim Finance, this result demonstrates on the contrary "the failure of shareholder engagement which is lost in endless and fruitless dialogues".

In a press release, it calls on “climate-conscious investors to act now to halt their investments in gas and oil expansion”.

The activists present in front of the Salle Pleyel booed the result, once known, before singing "Total, Total, we must choose fossil fuels or our future", observed an AFP journalist.

"Today, we lost a battle but in a year we can win the war, minds are changing," MEP Pierre Larrouturou, present on the spot, told AFP.

The demonstrators, surrounded by around twenty police officers, remained outside the room for the duration of the GA, then were able to leave the premises, in small groups and in peace, once the session was over.

They consider the oil and gas group "totally irresponsible" because it continues to exploit oil and gas, despite calls from scientists to drastically reduce the use of fossil fuels to fight against global warming.

They also denounce the presence of the group in Russia.

"Total continues to operate with an economic model that is that of the world of yesterday," said Jean-François Julliard, director general of Greenpeace France, also present on site.

In the room, at least eight small shareholders hoped to influence the group's climate orientation, a movement observed in multiple large companies in France, the United States and elsewhere.

Among the rebel shareholders, Edmond de Rothschild or La Financière de l'Echiquier, not particularly known for their shareholder activism, as well as the Dutch MN.

All had announced that they would vote against the climate plan submitted to the shareholders.

In question: the anticipation by TotalEnergies of a "sharp increase in the production of hydrocarbons over 2019-2030" but also the regret that "the surpluses resulting from the current high prices of hydrocarbons are not allocated as a priority to additional investments in the renewable", according to Assurances du Crédit Mutuel.

Especially since the group made a profit of 16 billion dollars last year.

TotalEnergies says it is aiming for carbon neutrality by the middle of the century, and is committed, among other objectives, to reducing by more than 30% compared to 2015, the emissions released by the petroleum products it sells.

It invests in renewables, adding a major US producer, Clearway, to its portfolio on Wednesday.

But the group estimates that demand will remain strong, not believing in a 30% drop by 2030, as envisaged by the International Energy Agency (IEA).

The "fall in demand for oil and gas will not be linear", declared Patrick Pouyanné in front of the handful of shareholders present in the room.