Feijóo charges Marlaska for his veto of the tribute to the police: "He doesn't have a pass"

"I come to the Senate with the illusion of contributing to my country as a whole and serving the Spanish institutions." Alberto Núñez Feijóo has taken possession this... 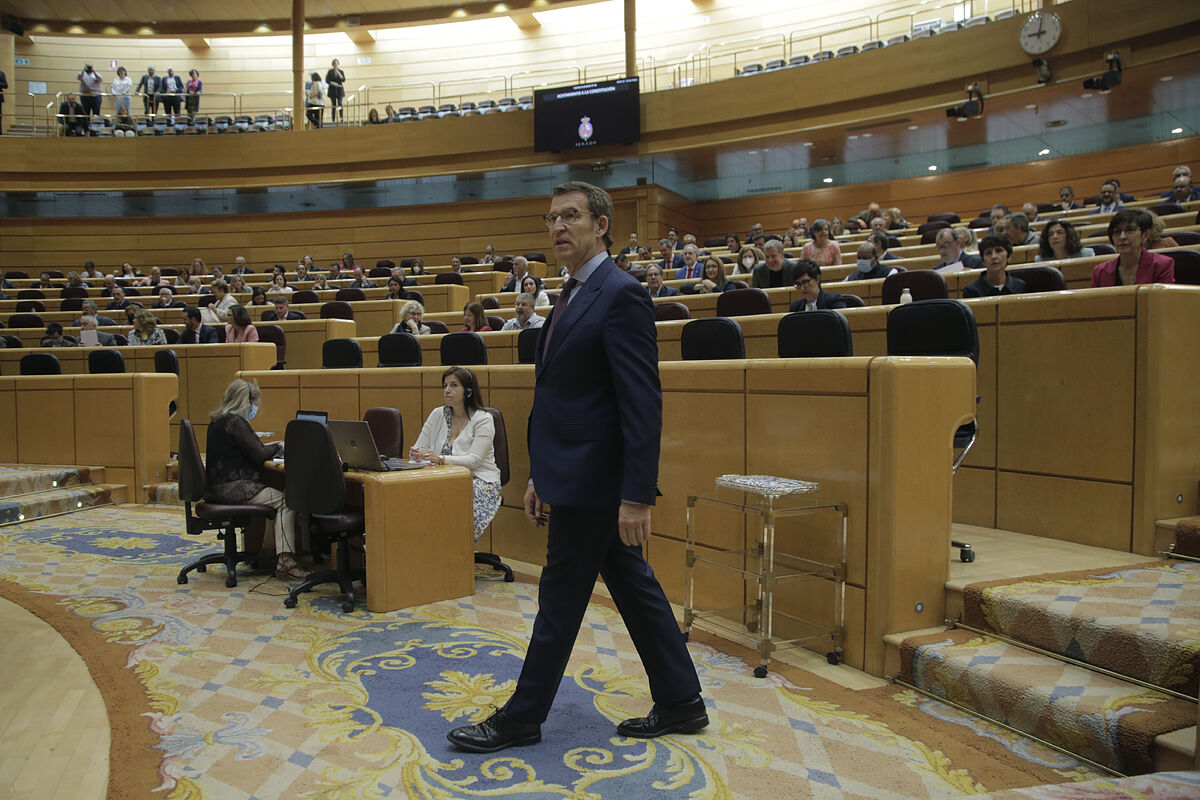 "I come to the Senate with the hope of contributing to my country as a whole and serving the Spanish institutions."

Alberto Núñez Feijóo has taken possession this Wednesday of his seat in the Upper House with the clear objective of confronting Pedro Sánchez face to face.

"We are the antithesis of sanchismo", he has summarized it in the second formal press conference in

since he presides over the PP.

The leader of the opposition has charged harshly against Pedro Sánchez for "the erosion of the institutions" that, in his opinion, he is carrying out, especially in

. We have seen it in the granting of pardons and we have seen it," he said, in the law agreed by PSC, JxCat and ERC after the sentence of

the Superior Court of Justice of Catalonia

that obliges to give 25% of teaching hours in Spanish in that community.

For Feijóo, the PSC is guilty of "violating a judgment of the TSJC to fail to comply with the co-official nature of languages ​​in Catalonia."

"If the sentences are not carried out, we are not in a state of law", he added.

For Senator Feijóo, "the problem is that in many Catalan schools the law is not followed".

"There is a repeal of individual rights to be able to speak in both languages. We are very surprised by this position of the PSC. I am convinced that the majority of PSOE voters disapprove of this pact in order to be able to spend a few more months in La Moncloa", has added.

In fact, Feijóo believes that "25% is the minimum. I am much more in favor of the balance of cordial bilingualism; in Galicia it is 50%".

cannot be a short dribbling tool and it should not be an element that can be chopped to suit the consumer", he has disfigured himself.

"The PSOE has mutated"

Asked about the information from

about the veto of the Minister of the Interior, Fernando Grande-Marlaska, to the presence of the King in the act of homage to the policemen and civil guards who put an end to ETA, Feijóo replied that "he does not have a pass ".

"The Minister of the Interior does not like witnessing and recognizing what has happened in Spain at the worst moment" of democracy, he has underlined.

"There cannot be a minister responsible for that veto, and if it is confirmed, the minister continues in an escape from his own history as a judge of the National Court", he has settled.

Regarding the cooling of the dialogue with the Government, advanced today by this newspaper, Feijóo has assured that he is "surprised" that the Government "wants to speak with a party of gangsters", in relation to the adjective that Sánchez used against the PP from the tribune of the Congress.

"In the event that the interests of the Government coincide with the Spanish, we will talk. We had coincidences with the PSOE, but the PSOE has mutated", Feijóo has detailed.

Given the "situation" of the Government and "given the nonsense of the disqualifying 'mugs', we will continue after 19-J" the negotiations with the Executive, he has explained.