China News Service, May 25 (Reporter Meng Xiangjun) As of May 24, it has been 90 days since the Russian army entered Ukraine to carry out special military operations. Ukrainian President Volodymyr Zelensky recently passed a presidential decree extending the country's state of war for 90 days at one time.   At the same time, with the Russian-Ukrainian negotiations almost stagnant, Zelensky again 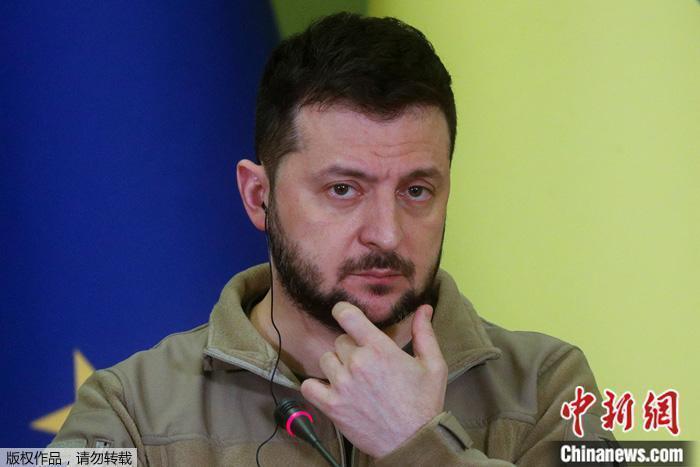 China News Service, May 25 (Reporter Meng Xiangjun) As of May 24, it has been 90 days since the Russian army entered Ukraine to carry out special military operations.

Ukrainian President Volodymyr Zelensky recently passed a presidential decree extending the country's state of war for 90 days at one time.

At the same time, with the Russian-Ukrainian negotiations almost stagnant, Zelensky again mentioned meeting with Russian President Vladimir Putin, saying that he would discuss a "truce".

But at the same time, he aggressively urged the West to deliver advanced weapons systems and warned that there could be "blood battles" ahead.

As for how to end the conflict as soon as possible, former US Secretary of State Henry Kissinger recently gave a suggestion.

But will Zelensky adopt it?

[The situation is tight, I want to see Putin]

For now, the conflict shows no end in sight.

Zelensky warned that the battle in Uzbekistan is becoming more and more "bloody", with an average of 100 Ukrainian soldiers killed every day.

The Russian Armed Forces and Donetsk said they had "blocked and effectively controlled" the main supply lines that transported ammunition, equipment, fuel and lubricants to the Ukrainian army in the Donbas region.

For more than 2,000 Ukrainian prisoners of war and foreign mercenaries at the Mariupol Azov Steel Plant who surrendered, the Donetsk side intends to open a court and "hold an international trial".

The "Azov Camp" base camp fell into the hands of the Russian army, the supplies to the Donbass were cut off, and the bad news came one after another, and the situation was not optimistic.

On the 23rd local time, Zelensky once again expressed his willingness to speak directly with Russian President Vladimir Putin.

The only thing that can be discussed at the meeting is the "truce issue".

In late April, the Kremlin had replied that Putin did not refuse to meet with him.

However, the location and other details are not up to Kyiv to decide.

You can talk about it, but you must come to Moscow.

And now, almost a month has passed, and Zelensky has not "single-handedly go to the meeting."

Data map: At the end of March 2022, the Russian-Ukrainian delegation started negotiations in Istanbul, Turkey.

On the one hand, he acknowledged that dialogue would be the "only way" to end the conflict, but on the other hand, he pointed out that the current "complex situation" makes it impossible to determine how the dialogue will change in terms of form, scale, participants, etc. in the future.

Russian Deputy Foreign Minister Rudenko said on the 23rd that it was the Ukrainian side that chose to freeze the negotiations between the two delegations.

Moscow will be willing to renegotiate with Ukraine as long as Kyiv "shows a constructive attitude" and responds to Russian proposals.

He has recently been "splashed cold" by European leaders one after another, revolving around Ukraine's desire to quickly join the European Union.

The European countries stated this:

French President Emmanuel Macron: "Ukraine's quest to join the EU in the short term is difficult to achieve, and the process of allowing it to join will indeed take years, possibly decades."

French Minister of European Affairs Clement Bona: "If you tell Ukraine that it will join the EU in six months, a year or two years, then we are lying. This process may take 15 or even 20 years" .

"I don't want to give Ukrainians any illusions or lies."

German Chancellor Scholz: "Macron is right", "This won't happen in a few years, it's a matter of decades."

"The EU should not stop advancing those countries that have already started the accession process."

Austrian Chancellor Ertstadler: Ukraine's accession to the EU will be "a long process, which will not be realized in the next 5 to 10 years".

Some Balkan countries "have waited decades for Ukraine to have no fast track".

Everyone is not optimistic, thinking that there is "no back door to go" in this matter. Zelensky, who was full of expectations, is now half-cold.

"It's not fair," he responded. "It's like a family gathering at a table and you're invited, but you're not given a chair."

Although through the video of his speech, Zelensky has become a "guest of honor" in many Western parliaments and various international conferences, in essence, Ukraine has not received "special treatment".

Even if a country can wait 15 or 20 years, Zelensky cannot afford it!

There is no lack of solutions. Macron proposed alternatives while cooling Ukraine.

He pointed out that "the EU cannot be the only way to build the European continent in the short term" and therefore proposed the creation of a new organization, the "European Political Community", to operate independently of the EU framework.

According to Macron's vision, European "democracies" such as the United Kingdom and Ukraine "can find new spaces for political cooperation within the new framework."

But joining the new framework does not guarantee future EU membership.

In this regard, German Chancellor Scholz commented that Macron's idea is "a very interesting proposal to meet the huge challenges we face".

Zelensky was not too happy.

He pointed out that any alternative for Ukraine to join the EU "would be a compromise with Russia".

Based on the unsmooth path of political settlement, Zelensky also continued to emphasize the use of force to fight back, and repeatedly urged the West to provide advanced weapons as soon as possible.

On the 19th, the United States offered its largest aid package since the Russian-Ukrainian conflict, a package of about 40 billion US dollars, part of which was to provide Ukraine with more advanced weapon systems, and part of it was used to strengthen the United States’ own military power, and Military presence in Europe.

After consecutive meetings with lawmakers in some U.S. states, Zelensky has a bottom line.

He asked to upgrade equipment to deal with the Russian offensive.

For example, requiring precision-strike long-range drones that can be reloaded multiple times, rather than the current "switchblade" drones that are manned from miles away;

For example, the "Harpoon" anti-ship missile, with which the Ukrainian army can dismantle the mines that the Russian army had originally used to block important ports such as Odessa, helping to contain the Russian navy;

For example, the multi-barrel long-range rocket launch system that can help defend the main cities of Ukraine and counterattack in the Donbas region.

"The war will be bloody, but it will only end through diplomacy," Zelensky said.

Analysis believes that Zelensky has a backup plan on hand.

After waiting for a full "blood transfusion" in the West, gearing up to fight another "blood battle" is one of his betting options.

Only after gaining a certain bargaining chip on the battlefield can Zelensky really return to the negotiating table.

Or, conversely, it suffers further failure and eventually has to compromise politically.

On the 90th day of the conflict between Russia and Ukraine, former US Secretary of State Henry Kissinger expressed his views on the situation when he attended the World Economic Forum in Davos.

Kissinger stressed that the conflict could not drag on any longer and that negotiations should begin within the next two months, ideally returning to the past.

He noted that if the "war" crossed the dividing line, it would be "not about freedom in Ukraine, but a new war against Russia."

He warned that the West's attempts to bring the Russian army to a disastrous defeat in Ukraine should stop.

It would be deadly for the West to get carried away by a momentary mood and forget Russia's proper place in the European balance of power, with disastrous consequences for Europe.

Kissinger also reminded that Ukraine's appropriate role is to "become a neutral buffer state", not "Europe's border", and now has a different level of opportunity, but it can still be the ultimate goal.

In fact, Kissinger pointed out this path eight years ago, and believes that as a neutral country, becoming a bridge between Russia and Europe is the "ideal plan" for Ukrainian existence.

The Russian Satellite News Agency reported that a few days after the Russian military began to operate in Ukraine, Russia-Ukraine negotiations had discussed Ukraine's de-grouping and nuclear-free status, but the issue was later frozen.

Data map: At the end of March 2022, the Russian-Ukrainian delegation started negotiations in Istanbul, Turkey.

Zelensky said in March that Ukraine was willing to remain neutral and compromise on the Donbas issue, but a third-party guarantee would be required to sign a peace deal with Russia.

At that time, he hoped that the United States, Britain, Germany and other countries would serve as its security guarantors.

The Russian side previously proposed that Ukraine should establish a neutral model based on Sweden or Austria, which was rejected by the Ukrainian side.

I never thought that in less than two months, the choices of these two European "model countries" were completely different.

In one big change, Sweden abandoned its tradition of neutrality and applied to join NATO; in the other, Austria reiterated that its neutrality remained unchanged.

I don't know, which one does Zelensky hope to refer to?