Amid conflicting accounts, did a bus driver throw its passengers into the Nile because of the dispute over the ride tariff?

Although Egypt is one of the countries that suffers from a high rate of road accidents, as well as a high death rate resulting from these accidents, the accident of the fall of a minibus in the Nile was different and caused an uproar on the communication sites. 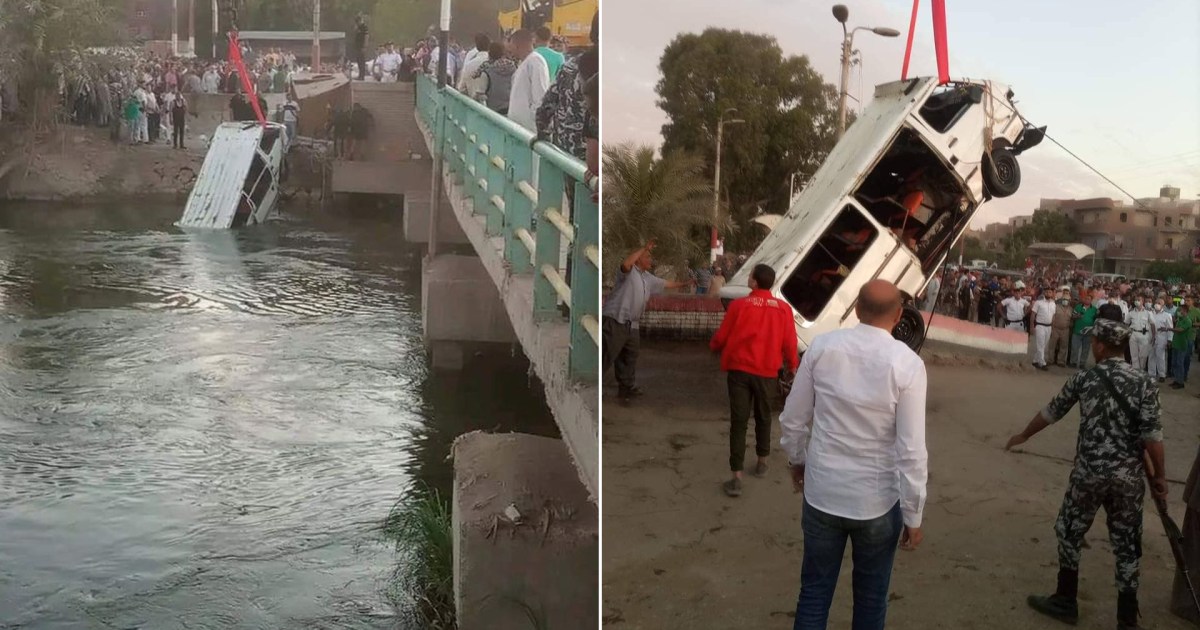 Although Egypt is one of the countries that suffers from a high rate of road accidents, as well as a high death rate resulting from these accidents, the accident of the fall of a minibus on the Nile was different and caused an uproar on social media.

The accident that took place in Minya Governorate (south of Cairo) last Saturday, resulted in the death of 6 passengers and the injury of others. With its passengers about the fare.

Although the Egyptian Public Prosecution, in a statement, denied these reports, some families of the injured confirmed the authenticity of the incident in statements to the local media.

She started buying orders for her joy, she didn't return.. 💔

Uncle of a bride #Minya who died in a microbus accident in Ibrahimiya Canal: The driver, after I moved out of the parking lot, said to the passengers, "You pay 2 pounds more, I will drop you in the canal pic.twitter.com/Duh4iL9pHC

Investigations reveal the fact that the driver of Minya microbus deliberately drowned it because the victims refused the extra fare. The driver is a drug addict

A microbus driver in “Minya” asked for 15 pounds from the customers, which is originally 13. People refused to pay the extra 2 pounds, two minutes after foaming. He got close to the canal and opened the door and went down and left the car, going to the end of the ride, and people died.. Seriously, this happened without any exaggeration, And currently the whole country is looking at it pic.twitter.com/JAkrsj8WaL

After the accident, accounts varied about the truth of what happened inside the bus before it fell into the Nile. Ibrahim Ezz, the uncle of one of the victims of the accident, said that the bus driver demanded that the passengers pay 15 pounds, instead of the usual fare of 13 pounds (the dollar = 18.60 pounds), which It caused a quarrel between the driver and passengers.

Ezz said in statements to the Egyptian "Al-Hayat" channel, that the driver is famous for bullying, and threatened the passengers to get off the bus in the Ibrahimiya Canal if the fare he had set was not paid. Survivors were quoted as saying that the driver opened the bus door and jumped out of it before it fell into the Nile.

On the other hand, Dina Muhammad Antar - one of the survivors of the accident - denied the driver's request to increase the ride fare, or his threat to the passengers to take the car to the Nile, calling for the victims' families to leave their sorrows.

In statements to "Al-Masry Al-Youm" newspaper, Dina said that the excessive speed and imbalance of the steering wheel in the driver's hands were the cause of the tragic accident, and indicated that she did not want to remember the details of the painful accident.

The prosecution resolves the controversy

The Egyptian Public Prosecution settled the controversy over the accident, and said in a statement yesterday, Tuesday, that the accident was caused by the driver’s negligence and carelessness, and his driving the bus at excessive speed while he was a drug addict, which led to its fall into the Nile, the death of 6 passengers, and the injury of 5 others, and searches are still ongoing. Ongoing to make sure there are no more victims.

The Public Prosecution decided - according to the statement - to imprison the bus driver for a period of 4 days, pending investigations, after questioning the injured, whose testimonies stated that the bus driver tried to avoid an "artificial bump" and was surprised by him on the road as he was traveling at an excessive speed, which resulted in the imbalance of the steering wheel from his hand. And two of them confirmed that the rumors circulating about the bus driver threatening the passengers before the accident were not true.

Data from the Central Agency for Public Mobilization and Statistics (government) show that nearly 57 thousand injuries and more than 6 thousand deaths in road accidents were recorded in Egypt in 2020, a rate that decreased from the previous year by 28.9%, according to what Al-Shorouk newspaper reported. Egyptian.

The Egyptian newspaper Al-Ahram also quoted the Executive Director of the Egyptian Association for Compulsory Vehicle Insurance, Ibrahim Labib, that the first half of 2021 witnessed a shift in the severity of accidents on Egyptian roads, pointing out that 700 deaths occurred in only 72 accidents, which means that the number of deaths In each accident close to 10 casualties.

In September 2021, Mostafa Saad, head of the economic statistics sector at the Mobilization and Statistics Authority (governmental), said that despite the increase in the number of vehicles in Egypt and the increase in roads, the percentage of accidents on them decreased by less than half in 6 years, according to the latest statistics.