It was not a lapse.. the indications of Biden's assertion that he would intervene militarily if China invaded Taiwan

US President Joe Biden's statements yesterday in Tokyo, about Washington's readiness to respond militarily in the event of China's attack on Taiwan, represented a significant escalation of the US position in its confrontation with the Chinese rise. 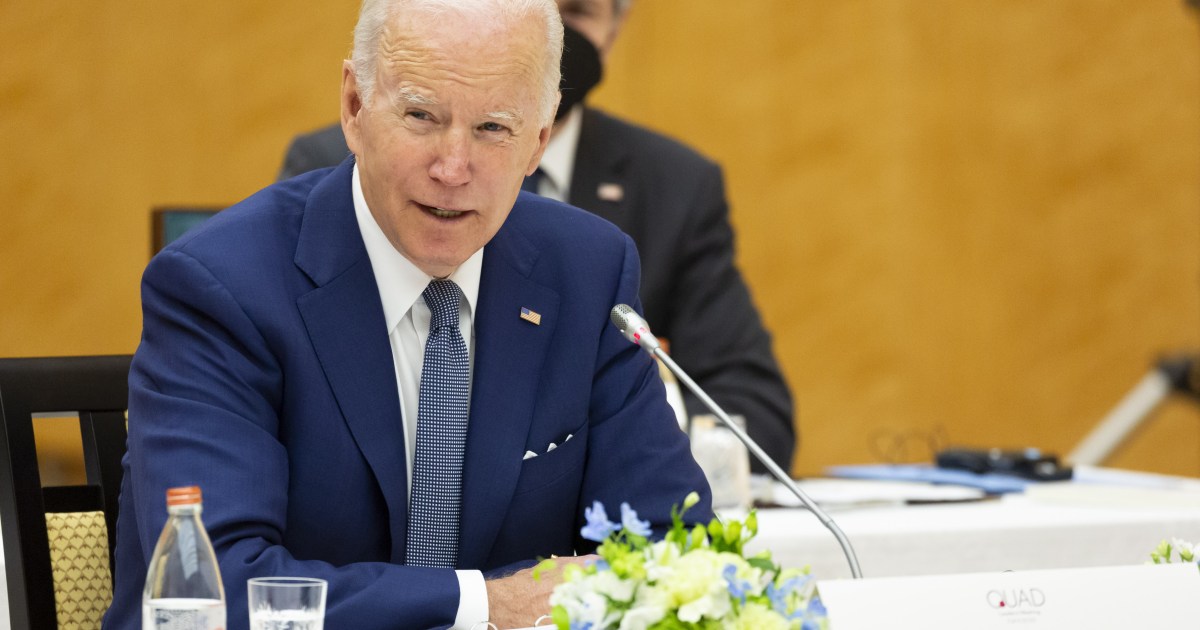 - The island of Taiwan is less than 160 kilometers from Chinese territory, and Beijing considers it a renegade province that must belong to the one Chinese house, while Washington supports Taiwan militarily and supplies it with the latest weapons it has to deter China, while adopting at the same time the "one China" policy, which is What prevents it from recognizing the independence of Taiwan.

The Russian war on Ukraine has renewed the debate in the American capital about Washington's reaction if China takes a step similar to the Russian one.

With the reluctance of US President Joe Biden's administration to intervene militarily in Ukraine, and its refusal to take any steps that Russia might see as escalatory, such as imposing a no-fly zone or supplying the Ukrainian army with combat aircraft, doubts increased about whether Washington would support Taiwan if it was exposed to a situation similar to what Kyiv is currently facing. .

Washington adopts a policy of "strategic ambiguity" regarding Taiwan. From here, President Biden's statements yesterday in Tokyo, about Washington's readiness to respond militarily in the event of China's attack on Taiwan, represented a significant escalation of the US position in its confrontation with the Chinese rise.

Biden's statements about his country's readiness to defend the island of Taiwan militarily against any Chinese invasion were not the first of its kind.

In October 2020, Biden responded - during a television interview organized by CNN - to a question about whether the United States was ready to militarily defend Taiwan if this island was attacked by China by saying, "Yes, we have an obligation to do so." .

Contrary to President Biden's previous lapses, his statement yesterday was not a lapse, as he repeated what he said several times and elaborated on the need for China to refrain from thinking about resorting to force because of the serious repercussions of that.

Biden's statement contrasts with the long-standing US policy of "strategic ambiguity" under which Washington helps Taiwan build and strengthen its defenses, without explicitly pledging to provide its assistance in the event of an attack.

For his part, US Defense Secretary Lloyd Austin stressed - after Biden's statements - that the "one China" policy has not changed, and said that the president intended to "highlight our commitment under the Taiwan Relations Act, to help provide the means for it to defend itself."

A senior White House official repeated Austin's words, telling Reuters that there is no change in his country's policy on Taiwan, as the president said, "Our policy has not changed" and reiterated his country's commitment under the Taiwan Relations Act to provide it with "military means to defend itself", stressing the policy " One China.

The United States adopts a policy of "strategic ambiguity" regarding the possibility of its military intervention to prevent China from annexing Taiwan to it. At the same time, Washington does not recognize Taiwan as an independent state, and does not establish diplomatic relations with it.

Some commentators argue that Washington has shown China - through its response to Russia - what to expect if Beijing attempts to invade Taiwan.

For her part, US Director of National Intelligence Avril Haynes believes that China is already more reluctant to invade Taiwan than it was just several months ago.

In a hearing before the House Intelligence Committee on March 8, Haynes said the US response to the invasion of Ukraine "is likely to reinforce China's view of the seriousness with which we will take any military action toward Taiwan. She saw it between Europe and the United States, especially in imposing sanctions."

Speaking at a Washington Forum organized by the Financial Times last month, CIA Director William Burns said that "it is clear that the Chinese leadership is trying to carefully consider the lessons it should draw from the Ukraine war with respect to With its own ambitions in Taiwan. I don't think for one moment that Russia's poor performance has led to the waning of Chinese President Xi's determination to control Taiwan. But I think it is something that affects their calculations of how and when China does it."

In March 2021, Admiral Philip Davidson, the former commander of US forces in the Indo-Pacific region, warned members of Congress that China could invade Taiwan within the next six years.

Successive US administrations have adopted the principle of "strategic ambiguity" toward China for two reasons:

First: The lack of clarity in the circumstances of the American intervention, which deprives the Chinese military planners of a clear knowledge of the limits of maneuvering with the United States.

Strategic ambiguity has forced Beijing to assume Washington's involvement or intervention in the event of attacks or an attempt to invade Taiwan.

Although the balance of power in the Taiwan Strait region is changing in favor of China, experts believe that Beijing is still far from possessing advanced forces that would enable it to succeed in seizing Taiwan.

Second: The strategic ambiguity also constitutes a deterrent against those who may be tempted to declare independence within Taiwan. Washington supports only Taiwan's autonomy, but it is certain that Taiwan's formal declaration of independence would lead to a crisis.

Taiwan and the US-China rivalry

Taiwan is the last arena of rivalry between China and America, and although the latter is not bound by a treaty to defend Taiwan, a Chinese attack will be a test of US military strength and its diplomatic and political dominance.

Although the two nuclear countries and the world's primary economic powers are engaged in a cold war over a number of contentious issues between them, their dispute over Taiwan is the only issue that is likely to provoke an armed confrontation between them.

Beijing considers Taiwan an inalienable part of Chinese territory, stressing that it will recover this island sooner or later, and by force if necessary.

Hence, the famous British magazine "The Economist" described Taiwan last July as "the most dangerous place on earth" because it poses a great dilemma for China and the United States together.