The National Police has arrested eight men who were dedicated to stealing high-end watches with great violence and who are accused of 19 robberies committed in the districts of... 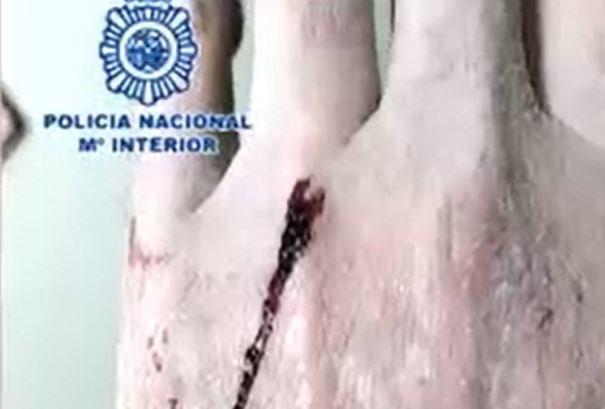 The National Police has arrested eight men who were dedicated to stealing high-end watches with great violence and who are accused of 19 robberies committed in the central districts of Madrid with the highest purchasing power.

Seven of those arrested have entered prison.

Four of those arrested are Venezuelans, one North African and three Romanians.

Two of them, Romanians, were captured in Madrid's Plaza de Cibeles after a chase after which the agents managed to recover the watch they had stolen, according to the Madrid Police Headquarters, which puts the total value of the stolen pieces at more of 400,000 euros.

after following him to a car park, where they forcibly snatched her watch, valued at 40,000 euros.

prowled the streets of the districts of Chamartín, Chamberí and Salamanca

with motorcycles and camouflaged themselves among the traffic coinciding with the entry and exit times of the workplaces.

After detecting a driver with a high-value watch, they followed him to his parking lot, where they approached him or acted on him while the victim's vehicle was stopped at a red light.

, the robber approached the vehicle from the side and strongly grabbed the driver's arm

through the window until he managed to remove him from the clock, after which he quickly fled.

The Police established a device in March that triggered the arrest of one of the robbers after violently stealing a high-end watch with the motorcycle.

The robber had gotten off the motorcycle and had opened the door of the vehicle he was chasing, hitting the driver, from whom he snatched the watch.

Subsequently, it was possible to determine the participation of this detainee in four other robberies with similar characteristics.

In a parallel investigation also started in February, agents from the Salamanca District Police Station detected

This is how the hand of one of the people assaulted by these thieves remained.

In this case, the perpetrator, a young man from the Maghreb, surprised young people in a friendly way when nightclubs in the Salamanca district closed, fostering close personal contact to facilitate the abduction and when the victims noticed and tried to resist, they suffered aggression.

Several police devices allowed the identification and location of this man, who was arrested as

responsible for six robberies with violence.

In another similar investigation that began in October last year, several robberies were reported on restaurant terraces in the Madrid districts of Salamanca, Hortaleza and Chamartín.

These robbers, who used to act in pairs, attacked the victims with extreme violence with the back of a gun, even causing serious injuries to seize their watches and escaped on motorcycles.

Various devices developed since April culminated on the 17th with the arrest of four men.

Likewise, on the weekend of May 14 and 15, citizen security agents were alerted on a street in the Salamanca district, where some men approached a person from behind and

demanded his watch from a prestigious brand.

They managed to take it off with a strong pull and fled in a vehicle before which several patrols immediately moved to the place, locating this tourism circulating through nearby streets.

The agents began a chase that continued on foot and caught up with them in Plaza de Cibeles, where those arrested stirred up elbowing and headbutting the police.