C4 Final: at Roma, Spinazzola in search of lost time

The Europa League Conference final between AS Roma and Feyenoord Rotterdam, Wednesday in Tirana (9 p.m.), is an opportunity for Roman defender Leonardo Spinazzola to conclude with a smile a… 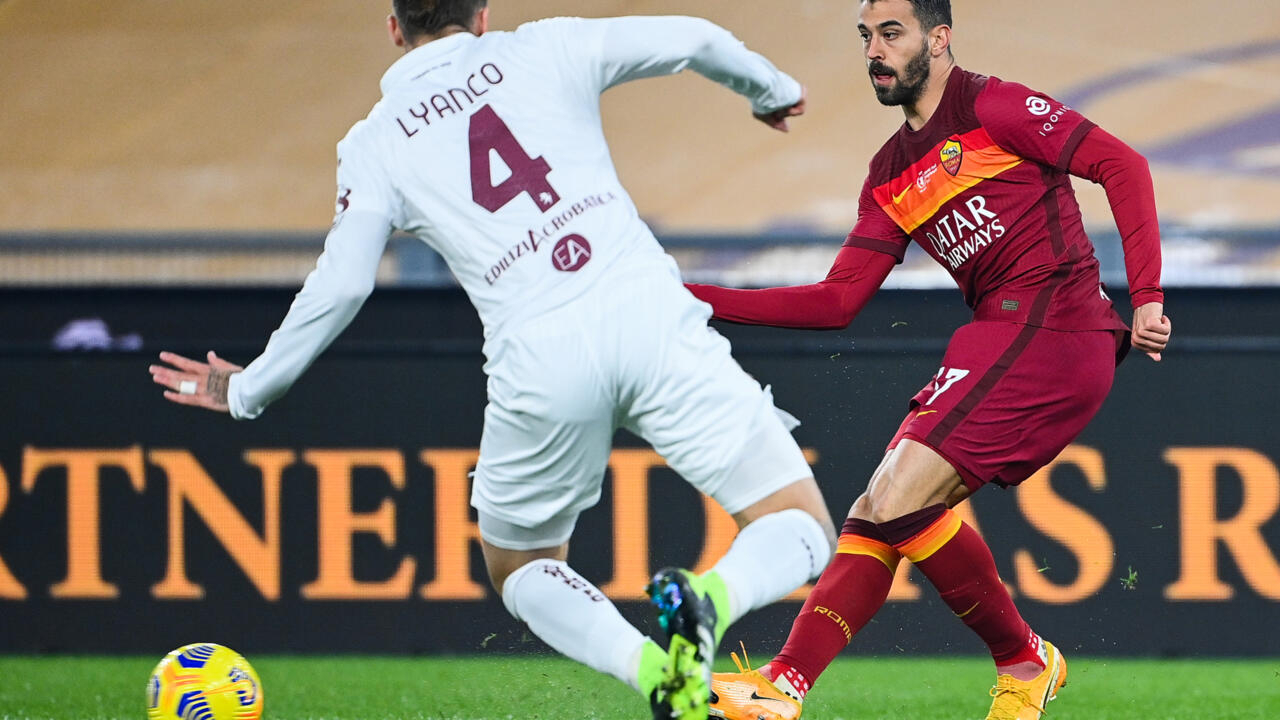 "The important thing will be to lift the Cup, even if I remain on the bench. We will see if I play or not, but I am available and already delighted to be", assures the Italian international left-back, whose season 2021 -2022 started on... May 9th, only two weeks ago.

Spinazzola dazzled Europe last summer on the left flank of Roberto Mancini's Nazionale, with his incisive overflows: flashed at nearly 34 km / h, the player was even the fastest of the tournament, according to UEFA .

But the "Speedazzola" competition stopped in the quarter-finals against Belgium (2-1), due to a ruptured left Achilles tendon.

And it was from the edge of the Wembley lawn, with crutches, that he had to follow the final won against England (1-1 ap, 3-2 on tab).

Leonardo Spinazzola leaves the field on a stretcher after his Achelle tendon injury in the Euro quarter-final against Belgium on July 2, 2021 in Munich Matthias Hangst POOL/AFP/Archives

"Even if I haven't played, I consider myself to have won the Euros", specifies the 29-year-old player to those who would doubt it.

The former Atalanta and Juventus side, already arrested for a long time four years ago to have surgery on his right knee, then plunged back into the traditional long course of care and rehabilitation, with ups and downs. stockings.

"Head Against a Wall"

The rapid initial progress gave him hope for a return at the end of 2021, but he was disappointed.

"The first three months went well, I said to myself why not. And then the muscle stopped growing," he told the press last week at Roma's training center.

"The hardest part was that moment. When I wasn't seeing the results of my work. I was here, working from 9:00 a.m. to 4:00 p.m. every day, but nothing, it was like dead, I didn't feel the muscle grew. I felt helpless, like I was banging my head against a wall that was still there, intact...", he described.

He then changed his mind and agreed to "let the time pass" to finally be able to rejoin the group at the beginning of April then appear on the match sheets, as a substitute, and finally find the field.

Leonardo Spinazzola with Roma in the round of 16 of the Europa League against Sevilla FC on August 6, 2020 in Duisburg, Germany Friedemann Vogel POOL / AFP / Archives

A symbolic minute against Fiorentina (0-2) on May 9, then a half-time against Venice (1-1) five days later and almost a complete match (83 minutes) Friday evening at Torino (3-0) : "Spina" finds forgotten sensations, hoping that this will at least allow him to come into play on Wednesday against Feyenoord.

"I don't know exactly where I am, but I feel good. I just miss playing to regain confidence", explains the Italian international who could in the process find the Nazionale, eliminated in his absence on the road of the World Cup in Qatar.

The program is extensive in June, perhaps too much for a recovery: Germany twice, England and Hungary in the League of Nations, after the "Finalissima" against Argentina scheduled for June 1 in London between the champions of Europe and France. 'South America.

Leonardo Spinazzola before his injury in the quarter-final of the Euro against Belgium on July 2, 2021 in Munich Matthias Hangst POOL / AFP / Archives

Mancini didn't promise him anything: "He just told me he was happy that I came back."

Before contributing his stone to the new reconstruction of an Italian team which he has missed so much since the Euros, Spinazzola therefore remains first and foremost focused on his Roma, a team where he perceives the same "cohesion" as in the Nazionale last summer.

"Then, in the locker room, it's obviously a little more difficult for me who doesn't speak English, but I make gestures!"

adds with a rediscovered smile this member of the solid azzurro core (with Mancini, Pellegrini, Zaniolo, Cristante, El Shaarawy) of a Roma with a strong English accent, including Tammy Abraham and Chris Smalling.