“Understanding begins to mature”: why the US announced the risk of an international military conflict

The world today is becoming more and more unstable, and the threat of a potential military conflict between the major powers looms before it, said the chairman of the US Joint Chiefs of Staff, General Mark Milley. According to him, the provoking element in this situation is allegedly Russia and China, which have "significant military potential" and, in his opinion, plans to change the current "rules-based" world order. Meanwhile, Russian Foreign Minister Sergei Lavrov previously emphasized that no one saw, discussed or approved the “rules” that Western countries impose on other states. Experts believe that Millie's speech demonstrates that the United States is ready to confront not only Russia, but also everyone who questions their superiority even in the slightest degree. 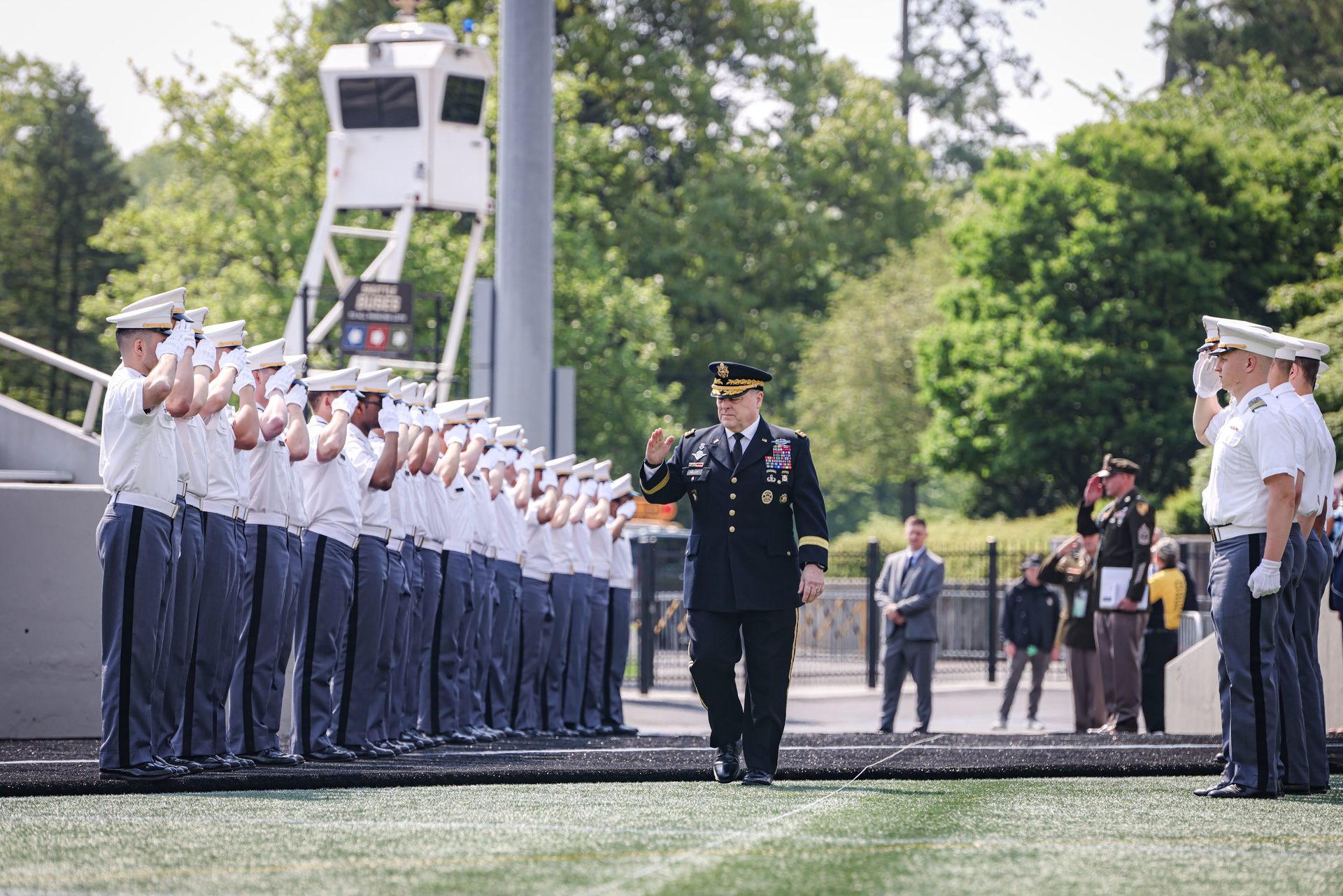 The world today faces a potential conflict between the major powers, General Mark Milley, Chairman of the Joint Chiefs of Staff (CNS) of the US Armed Forces, said, speaking to graduates of the West Point Military Academy.

“The world is becoming more and more unstable.

The world we are being pushed towards has the potential to become a major international conflict involving the great powers.

And this probability is growing, not decreasing,” he said.

The reason for this, in his opinion, is the ambitions of Russia and China - world powers, "each of which has an impressive military potential and fully intends to change the current (world. -

) order based on rules."

At the same time, according to Milley, they also represent challenges directly to the United States itself, which since the fall of the Berlin Wall has allegedly been "the undisputed world military, political and economic leader."

Milley called such challenges the actions of the Russian Federation in Ukraine and the rapid economic rise of China - a state with an allegedly "revisionist foreign policy, supported by an effective and growing armed forces."

“What was once the exclusive domain of the US Armed Forces is now available to most countries that have the means to acquire these technologies and the corresponding desire,” the general lamented.

The degree of military superiority that the United States has enjoyed for the past 70 years is rapidly declining, and the country's position is already being contested in space, cyberspace, air, sea and land, Milley said.

In this regard, he stated the need for the current generation of American officers to change the way they think and fight in future wars.

"No one saw or approved"

In Russia, the words of representatives of Western countries about a world built "on the rules" are called strange.

Such an idea, in particular, was expressed by President Vladimir Putin at a meeting with UN Secretary General António Guterres on April 26.

“For us, the maxims of some of our colleagues sound somewhat strange when they talk about a world based on rules.

We believe that the main rule is the Charter of the United Nations and other documents adopted by this organization, and not some papers written by someone for themselves or to ensure their interests, ”Putin said.

The opinion of the Russian leader was later supported by Russian Foreign Minister Sergei Lavrov.

“No one has seen, discussed, or approved these ‘rules’, but they are being imposed on the world community… Those who disagree will be punished.

It is clear that not only Russia.

Moreover, we will give back.

Everyone who is capable of pursuing an independent policy is under attack,” the head of the Russian Foreign Ministry said.

At the same time, Lavrov drew attention to the fact that such a world order does not provide for either democracy or pluralism, even within the collective West.

“We are talking about the revival of strict bloc discipline, the unconditional submission of the “allies” to the dictates of Washington,” the minister emphasized.

Lavrov also noted that Western players are introducing the idea that NATO is allegedly the vanguard of the community of democracies and therefore should replace the UN in matters of world politics, or at least subordinate this policy to itself.

Meanwhile, experts note that the United States cannot completely ignore the same Russia as a world player whose opinion must be reckoned with, especially in areas of strategic interest to it.

From this position, analysts assessed the recent contacts initiated by the Pentagon.

Recall, according to the Russian Defense Ministry, on May 13, at the initiative of the American side, a telephone conversation took place between the head of the American military department, Lloyd Austin, and the head of the Russian defense department, Sergei Shoigu, during which the parties discussed "topical issues of international security, including the situation in Ukraine."

As noted in the Pentagon, this was the first ministerial conversation in three months.

Later, on May 19, similar negotiations took place between the head of the General Staff of the Armed Forces of the Russian Federation, Valery Gerasimov, and Mark Milli.

As the official representative of the KNS, Colonel David Butler, specified after the conversation, the parties discussed a number of issues in the field of security and agreed to maintain open channels of communication.

However, as Vladimir Bruter, an expert at the International Institute for Humanitarian and Political Studies, noted in an interview with RT, despite all the positive message of the contacts made, Russia still treats them with extreme caution.

“The United States has long wanted to resume such dialogues on the defensive line, but the Russian Federation must be very attentive to the information that Washington will suddenly share with it.

Because for the most part it is designed to hide the real actions and intentions of the United States.

Russia should continue to follow its course without making adjustments for information that comes from the United States, ”the analyst believes.

It is noteworthy that while the military departments of the two countries are making attempts to establish contacts, Washington does not seek dialogue on the diplomatic track.

In particular, this position was voiced at a briefing on May 20 by State Department spokesman Ned Price.

“In our opinion, now is not the time for a high-level conversation with the participation of Secretary of State (Anthony. -

) Blinken or other senior representatives of the State Department,” he said.

At the same time, he placed responsibility for the lack of prospects for dialogue on Russia, which supposedly does not take such negotiations seriously.

Meanwhile, Sergei Lavrov at the SWOP Assembly on May 14 stressed that the Russian Federation has always been open to an equal dialogue, but this did not work "because of the unacceptable, arrogant behavior of ... Western neighbors."

Statements by American senior officials about the prospect of a world conflict have every reason, experts interviewed by RT say.

As HSE professor Dmitry Evstafiev noted in an interview with RT, the US military often shows more sanity than American politicians.

“The US military is at least aware of the risks of a major armed conflict between their country and other states, while the political elite of the modern United States does not even imagine this,” the analyst believes.

According to Evstafiev, the reasons for the concern about world prospects, indicated by Mark Milley, are understandable: "Everyone who opposes the architecture that the United States creates is bad."

“But here the question is different.

In the United States, both at the political and military levels, an understanding is beginning to mature that it will not be possible to form an American-centric system in its pure form.

Therefore, they want to preserve the existing world there, in which the rules of the game are still determined by the United States, ”the expert noted.

Washington is convinced that any independence of other world players threatens them with the loss of controlled space and undermining their authority as an absolutely dominant force, the analyst specified.

Vladimir Bruter agrees with this position.

According to him, unipolarity for the United States is a source of profit, Washington, together with its closest allies, was able to concentrate most of the world's finances in its hands.

“Therefore, they will object to a multipolar world like the plague.

A multipolar world is a loss for them, because they do not want to let go of control on the world stage and allow their income sources to become independent, ”the expert said.

In turn, Dmitry Evstafiev called noteworthy the message that was laid down in Mark Milley's speech about the nature of potential conflicts and what place the current generation of Americans will have to take in them.

And the reason for this will be the unwillingness of the United States to negotiate and compromise with anyone.

They only have a “negative” program, that is, what they do not want to allow, but there is no “positive” one.

And this is a big, big problem, ”summed up Evstafiev.