The presence of Russian forces in his village and the war in Ukraine remind this Moldovan veteran of the 1992 Transdniestrian conflict that war is never far away. 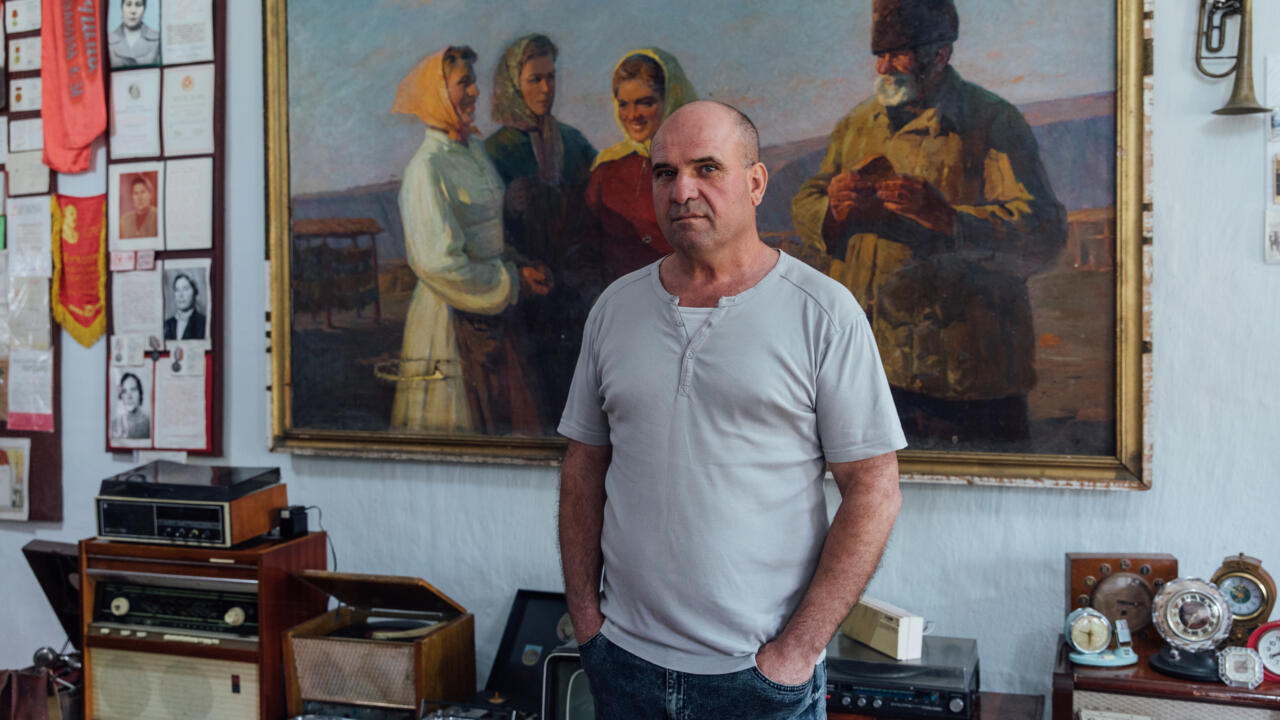 The presence of Russian forces in his village and the war in Ukraine remind this Moldovan veteran of the 1992 Transdniestrian conflict that war is never far away.

war broke out in his village.

In front of a belt and a gourd ripped open by the mine which carried away one of his neighbors, the veteran Victor Timus still remembers it.

It all started here, in Molovata Noua, that's where the first Russian post was disarmed by the soldiers and volunteers who were fighting for Moldova

,” says the man with the stature of a colossus.

the fall of the USSR

In just five months, hundreds of people, including many civilians, have died in clashes between Moldovan forces and Transnistrian separatists backed by the Russian army.

The conflict ended in a ceasefire and the maintenance of a self-proclaimed state recognized by no other, Transnistria.

still has no control over this pro-Russian enclave which is eating away at part of its territory.

And the heavy gaze of Victor Timus still testifies to the traces left by this fratricidal war.

It was difficult, very difficult

," insists the 58-year-old former soldier who did his military service in the Soviet army in East Germany from 1982 to 1984.

“The war of 92 never really ended

Along with the other veterans still alive, he firmly faces this tormented past.

Since 2005, the president of the region's veterans has helped a friend maintain the museum in the village where he was born, fought and lived all his life.

It's our story, we must preserve the memory of those who died

," he explains between the walls of what was, in Soviet times, the primary school where he learned to read.

The two men have used all the space possible to display the memories of Molovata Noua in this small building, where the vestiges of the war rub shoulders with local Moldavian craftsmanship.

On the walls, dozens of photos retrace the successive generations, almost making you lose track of time.

But Victor Timus, with an almost destabilizing calm, is responsible for bringing reality into the discussion.

,” he says, referring to the Russian forces manning a checkpoint a few dozen meters from the museum.

At the beginning, it was a temporary mission set up following the ceasefire agreements,

But they are still there, it has been thirty years

Wedged between the pro-Russian enclave and the Dniester, Molovata Noua is one of the only villages on the left bank that has remained under Moldavian control.

”, explains this reckless father who took up arms to defend the land where he has built all his life.

To get there from the government-controlled area, you have to take a ferry across the river.

And, at the entrance to the village, pass in front of these famous representatives of the "pacification mission", machine guns slung over their shoulders and crests in the colors of Russia.

We would like them to leave, but there is not much we can do

Difficult, in fact, to find each day face to face with those against whom he fought.

We fought against the separatists and the Russians, we shot them

Cohabitation is not always easy and, sometimes, frictions appear.

A way of marking their territory, he believes.

It's better to get away from them

"It's as if we were already in their world

Rebellious, Victor has been opposing foreign forces in his village for thirty years on a daily basis.

Regularly, he does not hesitate to publicly protest with certain brothers in arms against their presence.

A tenacity that recently earned him a three-year ban on entering Transnistria.

Blocked by the Transnistrians who control the bridge and the constraints of the ferry, he had to give up his jewelry workshop, located in Criuleni, a village further south.

It is his 15-year-old son who now runs the shop.

With the teenager, there are no taboos about war.

I tell him what happened in 92, the true story.

We both talk a lot

In particular the invasion of Ukraine by the Russian army, which did not leave this former volunteer unmoved.

When he talks about the conflict, emotion overwhelms him.

The fighting raging a few kilometers away plunges him back into bad memories.

We, the veterans, are in a particularly complicated situation

”, he insists, showing the photos of several relatives who died in 1992. Since a Russian general claimed that Moscow was planning to seize all of southern Ukraine in order to have direct access to Transnistria, Moldova fears to be Moscow's next target.

With the handful of veterans in the village, he fears he will be more exposed

if the conflict spreads to Moldovan soil

Admittedly worried, Victor Timus, like the inhabitants of Molovata Noua, does not give in to panic but remains realistic: "

Anyway, we have been kind of busy for three decades, it's as if we were already in their world

Like many Moldovans, he hopes that the Ukrainian army will stand up to that of Vladimir Putin.

The only hope, according to him, to "

If Ukraine falls, it will be the return of the Soviet Union

► To read also: The war in Ukraine and the destabilization of the former Soviet republics