The 2021-2022 season was often spectacular on the pitch and sometimes shaken in the stands, before lowering its curtain on Saturday on a "crazy evening" between the race for Europe, undecided until… 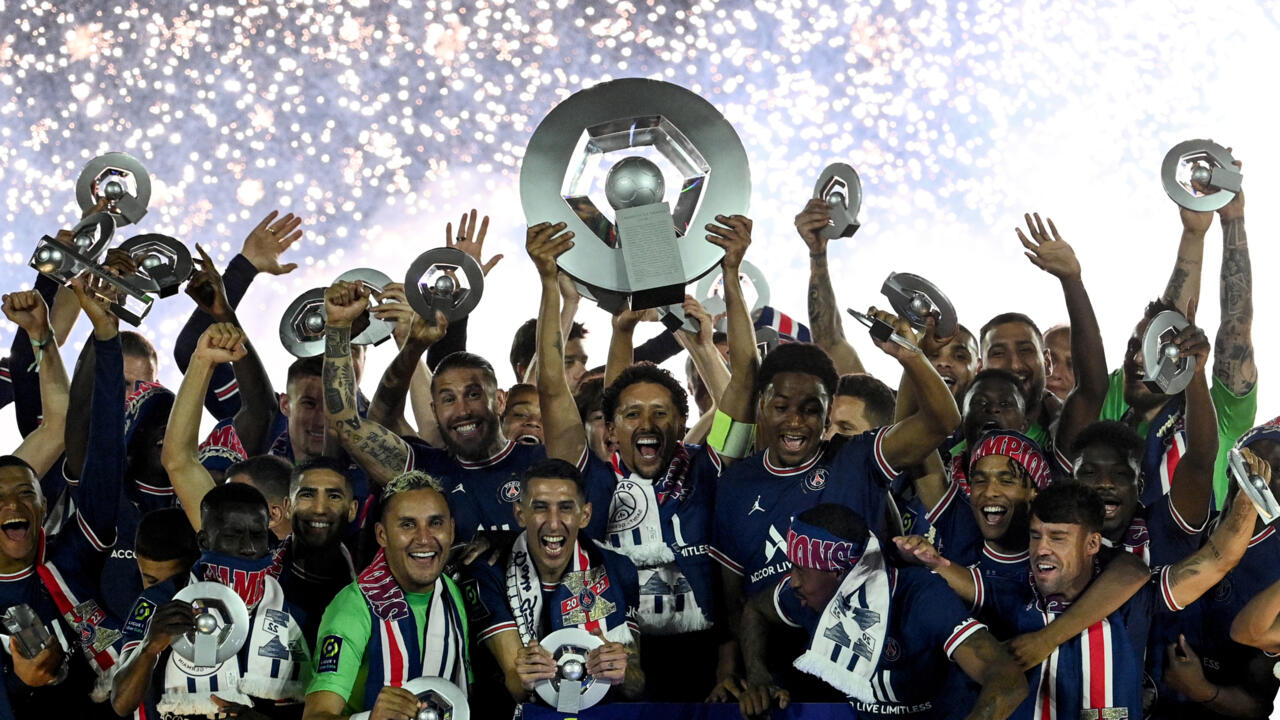 Rarely has a 38th day concentrated as many issues as that of Saturday.

And the final scenario lived up to the promises by offering a "crazy evening", a "breathtaking spectacle full of emotions" as summed up by the president of the League, Vincent Labrune.

Second place was offered in turn to Monaco, OM, then again to Monaco, before being snatched by the Marseillais, victorious 4-0 from Strasbourg and qualified directly for the Champions League... thanks to the equalization of Lens (2-2) against the Monegasques in the 96th.

Nice believed to steal 4th place from Rennes by overthrowing Reims (3-2, hat-trick from Andy Delort) but the Bretons, led 2-1 in the 88th, hung on Lille (2-2) the point of the draw which they lacked in the 93rd.

At the bottom of the table, Saint-Etienne obtained an almost miraculous reprieve: its place in the play-offs is only held by one point, obtained the last quarter of an hour in Nantes (1-1), ahead of the relegated Metz and Bordeaux.

Monaco players shot down on the goal of Lensois Ignatius Ganago depriving them of a direct qualification for the C1, May 21, 2022 FRANCOIS LO PRESTI AFP

The sometimes dull game of Paris SG has been illuminated all season by the genius of Kylian Mbappé, the first to achieve a "double double" in Ligue 1: the 23-year-old striker finished top scorer (28 pawns) and best passer ( 17 "assists").

The French punctuated his season with the UNFP trophy for best player, for the third time in a row, with a hat-trick against Metz (5-0) and, above all, the long-awaited announcement of his extension in Paris, until 2025, despite Real Madrid's diligent courtship.

Clermont Foot landed in Ligue 1 for the first time in August, with the status of little Thumb and the desire to never deny its identity.

The Auvergnats finish seventeenth, four lengths behind the barrage Saint-Etienne.

"I'm not going to say it's a feat, but not far anyway. Rightly, everyone saw us go down with the smallest budget", summarized coach Pascal Gastien once the maintenance was assured.

"I didn't know Ligue 1, we could have panicked but we remained stable. We've been playing like this for five years, it would have been suicidal to change the way we play"

Bordeaux, water in the gas on all floors

The season had however started with a bold recruitment with Vladimir Petkovic, who fell for the Blues with Switzerland at the Euro.

The disappointment of Bordeaux midfielder Danylo Ignatenko after the match in Brest sealing the descent of the Girondins into Ligue 2, May 21, 2022 DAMIEN MEYER AFP

The ex-Nati coach left through the back door in February, without preventing the Girondin edifice from collapsing: catastrophic defense (91 goals conceded), executive players dismissed, ulcerated supporters and demoralizing defeat against OM, the first at home in 44 years.

The club with the scapular finds itself in the second division for the first time since an administrative demotion in 1991.

PSG acquired its 10th title of champion of France on April 23, four days from the end, in a leaden atmosphere: its groups of supporters, upset by the new disillusionment in the Champions League, left the Park to celebrate the coronation outside the stadium.

PSG megastar Lionel Messi whistled at every touch of the ball against Bordeaux by his supporters at the Parc des Princes, March 13, 2022 Alain JOCARD AFP / Archives

The European rout has left deep marks, with copious whistles targeting Neymar and Lionel Messi, the seven-time Ballon d'Or author of a disappointing season, and a long strike of encouragement, only interrupted on Saturday thanks to Mbappé.

Overflows in the stands

From the start, the season was derailed in the stands with incidents in Montpellier (projectiles) and Nice (overgrown lawn, throwing objects and fights), then extended to Lens (scuffles), Saint-Etienne (delayed kick-off , rockets and smoke sent...) or even Lyon (throw of a water bottle, game stopped).

Marseille midfielder Dimitri Payet, twice targeted by projectiles, denounced "an unbearable form of collective resignation" in the face of violence in the stadiums.