COP 15 in Abidjan: a mixed record and no progress in the fight against desertification

After two weeks of negotiations, there has been no major progress in protecting land against desertification, droughts and soil depletion. COP 15 on desertification… 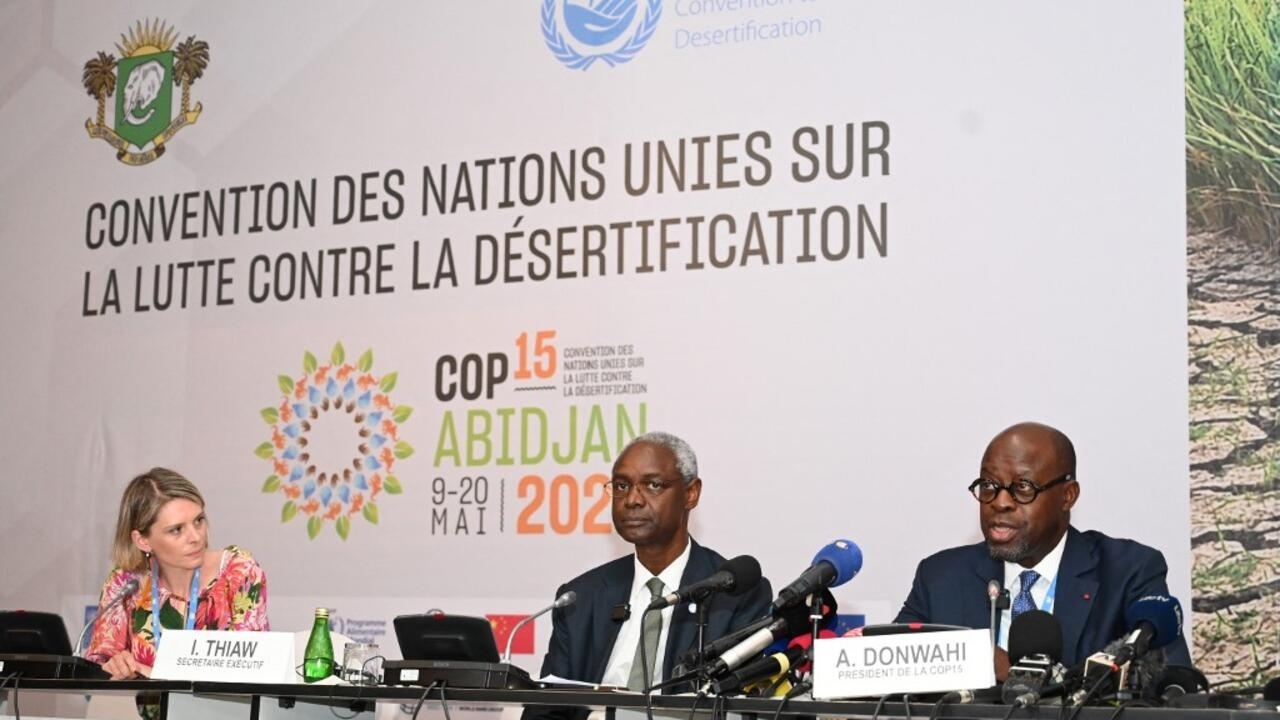 COP 15 in Abidjan: a mixed record and no progress in the fight against desertification

Alain-Richard Donwahi (right), former Ivorian Minister of Water and Forests and President of COP 15, and the Executive Secretary of the Convention on Desertification, Ibrahim Thiaw (right), speak at the conference COP 15 closing press briefing, May 20, in Abidjan.

After two weeks of negotiations, there has been no major progress in protecting land against desertification, droughts and soil depletion.

196 countries were gathered to try to agree on common objectives in this area.

With our special correspondent in Abidjan

After several hours of prolonged negotiations, one by one the various articles of the final agreement of this

Ibrahim Thiaw, executive secretary of the convention on desertification welcomes some announcements, but he does not hide some regrets.

There is a billion land to renovate around the world.

This is a relatively large commitment.

If there is one point that I would have liked to have seen with much more prominence, it is the participation of the private sector.

The land is managed by the private sector, mainly in the field of agriculture, and there, I would like, perhaps in the future, a lot more commitment

Also to listen: COP15: "319 million hectares are threatened by desertification in Africa"

The results are also mixed for civil society.

Manon Albagnac of the NGO Cari retains promises of efforts on access to land for the populations, but no great progress according to her.

There are commitments today, in terms of hectares to be restored, but are we really going to monitor these hectares?

On the drought, we could have hoped for a commitment a little more up to the stakes

"The COP of the poor"

It was the first of three COPs due to be held this year, with the much better known COP on biodiversity and COP on

With more than 6,500 registered participants, pavilions that have been able to withstand tropical storms, and several thousand press articles on COP 15 desertification.

There was, however, reason to rejoice Abou Bamba, president of the organizing committee.

But he acknowledges that it remains much less attended than the COP on climate, the last edition of which was held

It's out of all proportion.

It is true that there is media work to be done.

But it's still a particularly important COP

At a time when droughts, uncertainties about global agricultural production and rising food prices are hitting many countries, state decisions on land management could have been followed more closely.

On the spot, practically no international media made the trip.

Practically no large NGOs came or they remained very discreet.

Civil society organizations that are at this COP could have a little more of an alert or critical role vis-à-vis parties that do not respect their commitments, or even vis-à-vis the secretariat, which does not push for sufficiently important decisions

are now hitting all continents and affecting global agricultural production, States have postponed the issue.

See you at COP 16, in two years, which will take place in Saudi Arabia.

►Also read: COP 15 in Abidjan: faced with the progression of droughts, States must prepare