In Sado, the traditional drums of Japan make the souls vibrate

In a wooded room on the island of Sado, located in the Sea of ​​Japan, Yoshikazu Fujimoto, 71, beats the imposing drum placed in front of him, producing a sound so powerful that it vibrates the floor. 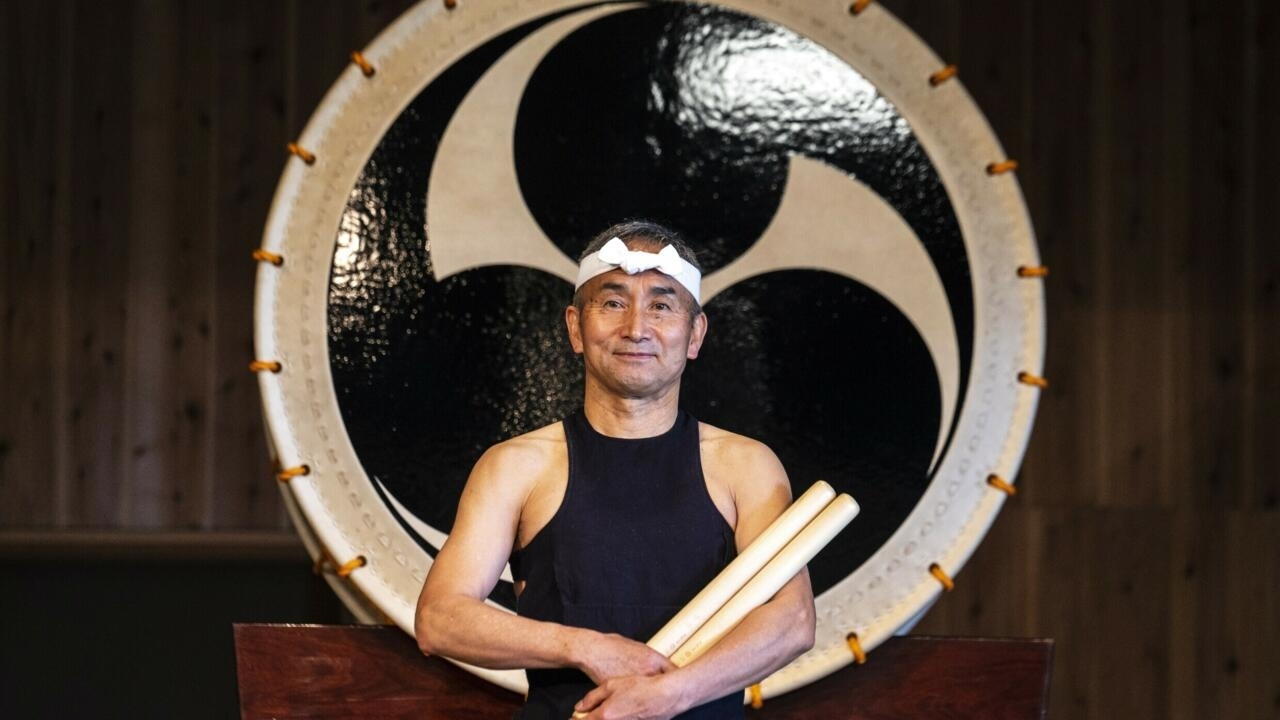 Mr. Fujimoto is an avid player of Japanese taiko, a musical form that has its roots in Japan's religious rituals, traditional theater and seasonal folk festivals.

However, despite its age, the taiko, as a spectacle, is a relatively modern invention, pioneered in the 1950s by jazz drummer Daihachi Oguchi and popularized by one of Japan's most famous troupes: the collective Kodo from Sado Island.

Mr. Fujimoto is the oldest of 37 members of this troupe, which recruits through a rigorous training program.

It was founded in particular to attract visitors to Sado, off the west coast of Japan, and tours nationally and internationally.

Taiko player Yoshikazu Fujimoto, on May 7, 2022 on the island of Sado, in Japan Charly TRIBALLEAU AFP

"Taiko itself is like a prayer," says Mr. Fujimoto, who arrived in Sado in 1972 to join the group that later became Kodo.

"It used to be said that the whole area where the sound of a drum sounded was one community," he explains.

It is the project of a lifetime for Mr. Fujimoto, a specialist in the o-daiko, a huge single drum mounted on a stand and played by a musician standing with his back to the audience, his arms raised above his head to strike the instrument.

The effect produces a wall of sound that penetrates the ribcage and vibrates the body.

Yoshikazu Fujimoto punctuates his effort with shouts, the muscles of his nearly bare back flexing under the straps of his tunic with each blow.

"Being one with the sound"

“I become one with the sound,” he says.

The performances of the collective Kodo range from the power of solo o-daiko to ensemble pieces with flute and vocals and comedic interludes.

Taiko players on May 7, 2022 on the island of Sado, Japan Charly TRIBALLEAU AFP

The first is made from a single hollowed-out tree trunk, with a cowhide or horsehide nailed to each end.

The second uses a skin stretched over rings fixed by ropes to a wooden structure.

These instruments have been used for centuries in religious rituals and traditional Noh and Kabuki theater.

Modern taiko performances are closer to Japanese folk festivals where troupes often made up of locals play in the streets or fields to unite communities, drive away evil spirits, or pray for a good harvest.

Contemporary taiko drew a lot of inspiration from this "and combined with more formal traditional live performances to evolve into what we see today," says Yoshihiko Miyamoto, president of the Miyamoto Unosuke company, which has been making taiko since 1861. .

The Kodo troupe during a taiko show on May 7, 2022 on the island of Sado, Japan Charly TRIBALLEAU AFP

This transition was made thanks to jazzman Daihachi Oguchi, who brought these drums on stage in the 1950s.

Then, in 1969, musician Den Tagayasu moved to Sado to found a taiko troupe that he believed would attract young people to the island and revitalize it.

"Straight to Your Soul"

Mr. Fujimoto left his native Kyoto to join the group and stayed in Sado, where he helped found the Kodo collective.

Joining the group now involves an arduous two-year training, where apprentices, aged 18 to 25, live in dormitories, with no telephones or televisions.

Repair of a taiko drum in a workshop of the Miyamoto Unosuke company, April 26, 2022 in Tokyo Charly TRIBALLEAU AFP

"The day starts at 5 a.m. when we go out to stretch. Then we start cleaning and polishing the floors," says Hana Ogawa, a 20-year-old who finished her apprenticeship this year.

The trainees then go for a run and spend the day training, only pausing for food.

They have one day off per week.

"I'm happy, because I love taiko, I pursued this goal and achieved it, so it's a dream come true," she told AFP.

In recent years, taiko has gained popularity in Japan and abroad.

It "has the power to connect people," says Miyamoto.

“Especially these days, you hear the sound of machines everywhere, but taiko uses that raw skin and the drum bodies made of wood.”

Taiko player Hana Ogawa of the Kodo collective, on May 7, 2022 on the island of Sado, in Japan Charly TRIBALLEAU AFP

"It's like a nature sound, very organic. I think that's one of the reasons why it directly touches your soul."