What is the meaning behind the US embassy's "creeping" return to Ukraine? 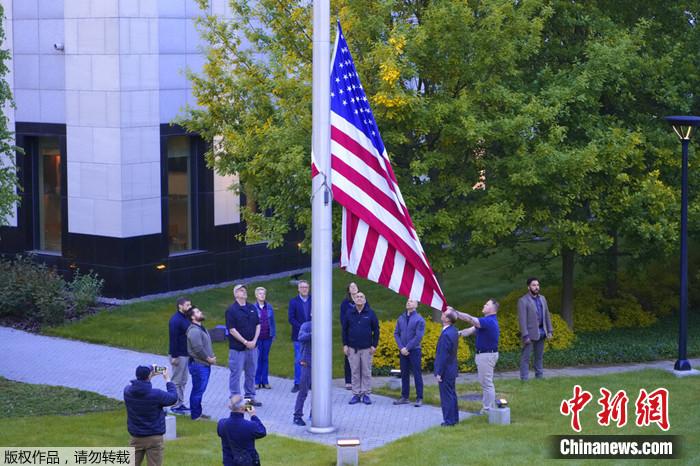 China News Service, May 20 (Guan Na) On May 18, local time, the U.S. Embassy in Ukraine reopened.

At the same time, the post of US ambassador to Ukraine, which has been vacant for three years, has also been approved by the Senate and has been filled by senior diplomat Bridget Brinker.

Employees of the U.S. Embassy in Ukraine raise the American flag at the embassy in Kyiv, Ukraine, May 18, 2022.

The conflict between Russia and Ukraine has been going on for several months.

From the initial "escape" to the current "return", what is the deep meaning behind the US's retreat and advance in Ukraine?

The strategic intention of the United States in Ukraine is constantly changing with the changes of the situation, turning passive into active.

On February 24, Russia announced a military operation against Ukraine, and as early as 10 days earlier, the United States took the lead in announcing the temporary closure of its embassy in Ukraine.

However, as the Russian army gradually withdraws from the vicinity of Kyiv and turns its focus to eastern Ukraine, more and more senior US officials, congressmen and diplomats have called for the reopening of the embassy in Ukraine.

In addition, European countries such as the United Kingdom and France have successively decided to move their embassies in Ukraine back to Kyiv.

The United States also adjusted its strategy and reopened its embassy in Ukraine after a lapse of three months, which Blinken described as an "important step."

The once "brain-dead" NATO woke up under the leadership of the United States, and even Sweden and Finland planned to join. The United States found its irreplaceable role in Europe in the Russian-Ukrainian conflict and reaffirmed its leadership in the transatlantic alliance. status.

Second, leave yourself a "backtrack".

Although the United States has reopened its embassy in Ukraine, its scale and operation are not as good as before.

When announcing the reopening, Blinken did not disclose the number of U.S. diplomats who have returned to Kyiv.

A small number of diplomats will initially return, the people said.

Relevant sources also said that the embassy has only resumed part of its work, and consular services are not yet operational.

The U.S. State Department still warns citizens not to travel across Ukraine.

Compared with the previous rapid evacuation, U.S. diplomats took a more cautious attitude when they returned, so much so that the U.S. Foreign Policy website directly used the word "creeping" in the title to describe it.

This shows that the U.S. still does not have high trust in the Ukrainian government and the Ukrainian army, and has left itself a "backward path" when the prospect of conflict is not clear.

Although the United States is far from the battlefield, it has made a lot of "war wealth" in this conflict.

It is foreseeable that its ulterior motives of deliberately expanding geopolitical conflicts will eventually backfire on it, triggering vigilance in other countries and questioning its credibility.

On the day the embassy reopened, the United States threw out the message of "standing with Ukraine" again-the U.S. Senate approved Brinker as the new ambassador to Ukraine.

As the situation in Russia and Ukraine has developed to this day, the United States has become the least willing country to end the conflict quickly.

The analysis said that the aid to Ukraine advertised by the United States is not only to reflect its status as a leader in the Western world, but more importantly, to maintain the continuation of the conflict.

U.S. State Department spokeswoman Price said Ukraine was at a "historic moment" and that Brinker's decades of diplomatic experience made her well-suited for the role.

The analysis pointed out that Brinker will play a crucial role.