NATO is considering the request of Finland and Sweden to join it, and Moscow vows a sudden response

Today, Thursday, Finland and Sweden formally applied to join the North Atlantic Treaty Organization (NATO). While most members welcomed the move and Turkey rejected it, Moscow vowed a sudden response. 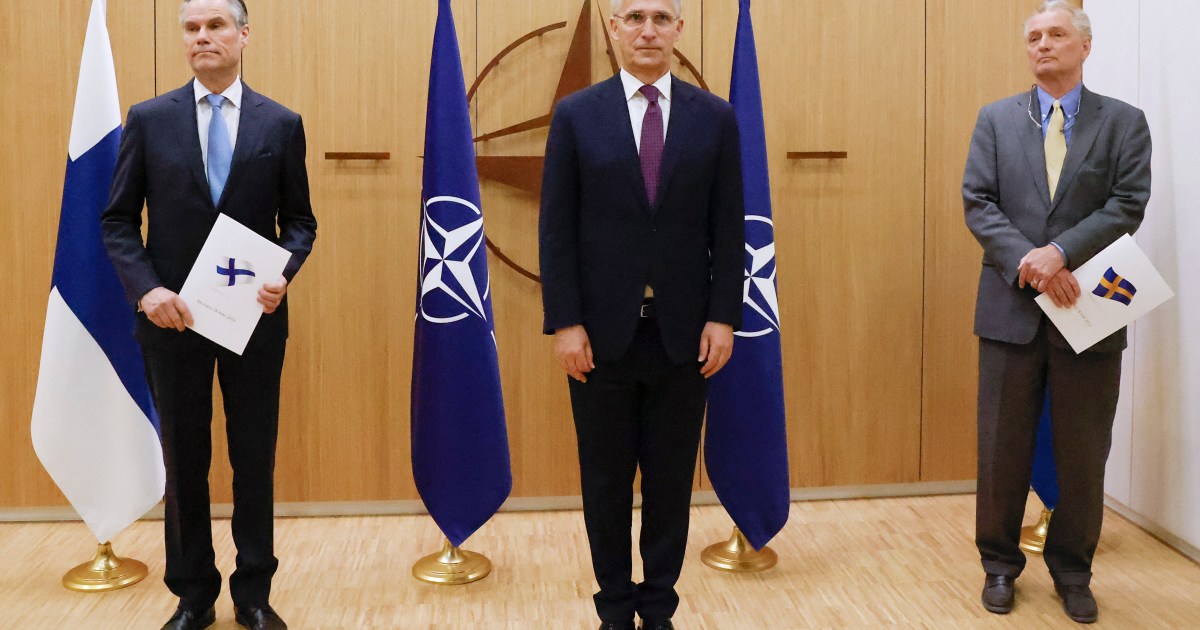 Today, the Military Committee of the North Atlantic Treaty Organization (NATO) continues its meeting at the alliance's headquarters in Brussels to discuss a number of military issues of strategic importance to the alliance, including the Russian war on Ukraine, and the request to join Finland and Sweden.

The meeting will be joined by chiefs of staff of the alliance's partner countries, Finland, Sweden and Ukraine.

Participants in these meetings will also discuss the implementation of the concept of deterrence in the European and Atlantic regions, in addition to developments in the military situation with NATO partners in Asia and the Pacific, specifically Australia, Japan, New Zealand and South Korea.

Finland and Sweden officially submitted a request to join the alliance, amid wide welcome from most members of the move and Turkey's rejection of it, but Moscow promised a sudden response.

Participants in these meetings will also discuss the implementation of the concept of deterrence in the European and Atlantic region, in addition to developments in the military situation with NATO partners in Asia and the Pacific, specifically Australia, Japan, New Zealand and South Korea.

Commenting on the request to join, NATO Secretary-General Jens Stoltenberg said that this step would enhance the security of the alliance countries, and US President Joe Biden welcomed it, describing the two requests as historic and affirming their strong support.

He added that Finland and Sweden's accession to NATO would enhance defense cooperation and benefit the entire alliance.

He stressed that he looks forward to working with Congress and NATO allies to rapidly bring Finland and Sweden into the strongest defense alliance in history and to meet with the leaders of Finland and Sweden for further consultations on the membership application.

Biden said his country will maintain its strong training activity and presence in the Baltic Sea region alongside NATO.

In turn, German Chancellor Olaf Scholz welcomed the decision to join Finland and Sweden in NATO.

He said their accession would make the alliance more robust and secure.

Schulz stressed before the German parliament that any Baltic country has the right to apply to join the alliance.

He also said that the Russian invasion of Ukraine made his country rethink national security, and emphasized continuing support for Ukrainians who refuse to bow to Putin.

Polish Prime Minister Mateusz Morawski considered Jane's that the accession of Sweden and Finland to NATO was an important consolidation of peace in Europe and a serious defeat for the Kremlin.

Morawski stressed that in the event of an attack on Sweden and Finland during the process of their accession to NATO, Poland will help them.

US National Security Adviser Jake Sullivan said Washington was certain that Finland and Sweden would have effective membership in NATO.

He indicated that it is possible to address Turkey's concerns in this regard.

Sullivan stressed in a press conference at the White House that Finland and Sweden are working directly with Turkey to address these concerns.

Sullivan revealed that US President Joe Biden's national security team has unequivocally and unanimously supported the accession of Finland and Sweden to NATO.

He stressed that the United States and its European allies will not tolerate any aggression against Finland or Sweden during their joining the alliance.

In this regard, US Defense Secretary Lloyd Austin said that Washington strongly supports Sweden's request to join NATO.

Austin added when receiving his Swedish counterpart Peter Holtqvist at the Pentagon in Washington that Sweden's accession to the alliance will enhance the capabilities of member states to defend themselves.

On the other hand, Turkish President Recep Tayyip Erdogan reiterated his opposition to Sweden and Finland joining the alliance.

He added, during a speech to his party's parliamentary bloc, that he did not want to repeat what he described as a mistake when Ankara agreed to Greece's joining the alliance.

In the opposite camp, Russian Foreign Ministry spokeswoman Maria Zakharova vowed that the Russian response to Finland's decision to join NATO would be surprising.

In her weekly press briefing in Moscow, Zakharova said that this response will be in the form of military measures, and will be left to the Russian military in the first place.

The Russian TASS news agency also quoted statements by the Speaker of the Russian Federation Council, Valentina Matvienko, in which she stressed the guarantee of Russia's security despite the accession of Finland and Sweden to NATO.

She added that Finland and Sweden's membership in NATO would negatively affect Europe's policies and would not secure the continent's stability, especially since the decision was taken under Western pressure from the United States and the alliance countries.