Chinese and Foreign Scholars Talk About China's Human Rights Path: Expanding Based on the Concept of Development 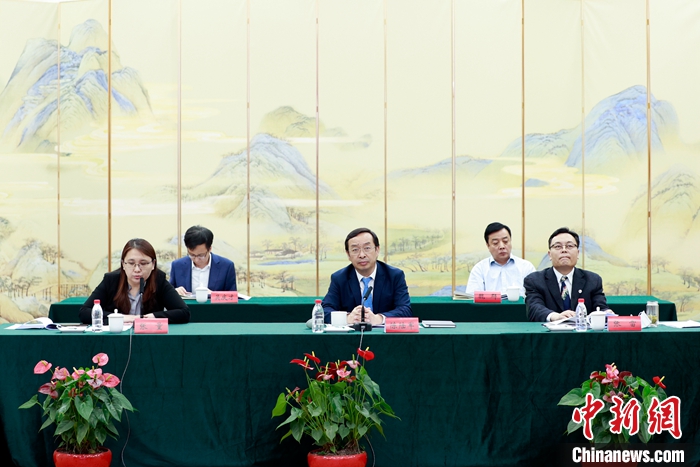 On May 19, China News Service held the "Symposium on the Development of Human Rights in China" in Beijing, inviting seven well-known Chinese and foreign experts and scholars to conduct in-depth discussions on related topics.

The picture shows the rostrum at the venue of the "Symposium on the Development Path of Human Rights in China".

The "Symposium on the Development Path of Human Rights in China" was held in Beijing on the same day. Lu Guangjin, Secretary-General of the China Human Rights Research Association and professor of the Law School of Jilin University, made the above point of view.

Development is the eternal theme of human society and the foundation and key to solving all problems in China.

He said that China's thousands of years of history and culture contain the ideas of respecting, caring for and protecting people, such as benevolence and friendliness, people-oriented, harmonious culture, and the unity of man and nature, which have profoundly influenced contemporary Chinese human rights concepts and value orientations.

The principle of the universality of human rights is the common spiritual wealth of human society. It is based on this that China has acceded to 26 international human rights instruments over the years, including 6 core United Nations human rights conventions.

From focusing on "the right to subsistence and development" to "the people's happy life is the greatest human right", China's human rights concept is constantly expanding.

Wang Wen, Executive Dean of the Chongyang Institute for Financial Studies, Renmin University of China, mentioned that in June 2017, the United Nations Human Rights Council adopted the resolution "Development Contributes to the Enjoyment of All Human Rights" advocated by China, which introduced the concept of "development to promote human rights" for the first time. The international human rights system has received extensive support from countries all over the world, especially developing countries.

He pointed out that in the past 40 years, compared with the disasters in other countries and regions, including wars, economic crises, and famines that have impacted human civilization, human rights in China have made important contributions to world development and are a new highlight of human civilization in the 21st century.

Harro von Senger, a well-known European sinologist and expert on Chinese law at the Swiss Institute of Comparative Law, also believes that China's progress in the field of human rights over the past 40 years is worthy of recognition.

More than 2,000 years ago, there was a Chinese philosopher who said, "Cang Lin knows the etiquette in reality".

The right to development is equally important as economic, social and cultural rights, and the human rights concept that only revolves around individuals is narrow.

On May 19, China News Service held the "Symposium on the Development of Human Rights in China" in Beijing, inviting seven well-known Chinese and foreign experts and scholars to conduct in-depth discussions on related topics.

The picture shows experts and scholars from China, the United Kingdom, Germany, Switzerland and other countries participating in the conference online.

Zhang Yonghe, Executive Dean and Professor of the Institute of Human Rights at Southwest University of Political Science and Law, believes that the concept of human rights originated from the West, and the Chinese people have gone through a difficult and tortuous process to understand and grasp it.

The Communist Party of China combines the Marxist concept of human rights with China's specific reality and the excellent traditional Chinese culture, constantly sums up the experience of respecting and protecting human rights, draws on the achievements of human civilization, and follows the development path of human rights that conforms to the trend of the times and suits the national conditions of the country.

Human rights are the framework for discussing human development, said John Ross, former director of the Economic and Business Policy Office of the City of London in the United Kingdom and a senior researcher at the Chongyang Institute for Financial Studies of China National University.

Contemporary China has made important contributions to the development of the global human rights cause.

The concept of human rights used in China's policy formulation begins with the real life of human beings and their needs, from the most basic food, shelter, health to human education, science and culture, and reflects the real rights of people in all aspects of work and life.

Through expert articles, high-end interviews, Sino-foreign dialogues, in-depth reviews, etc., this column rationally discusses major, emergent, hot and sensitive issues in the process of East-West exchanges. The exchange and mutual learning of Chinese and Western civilizations and the effective spread of Chinese civilization.