Roland-Garros: Alcaraz, rocket rhythm and feet on the ground

In one year, he has been propelled from talent to follow, entering Roland-Garros by qualifying to the rank of contender for the trophy: the phenomenon Carlos Alcaraz, at the gates of the top 5 at 19, affirms his ambitions... 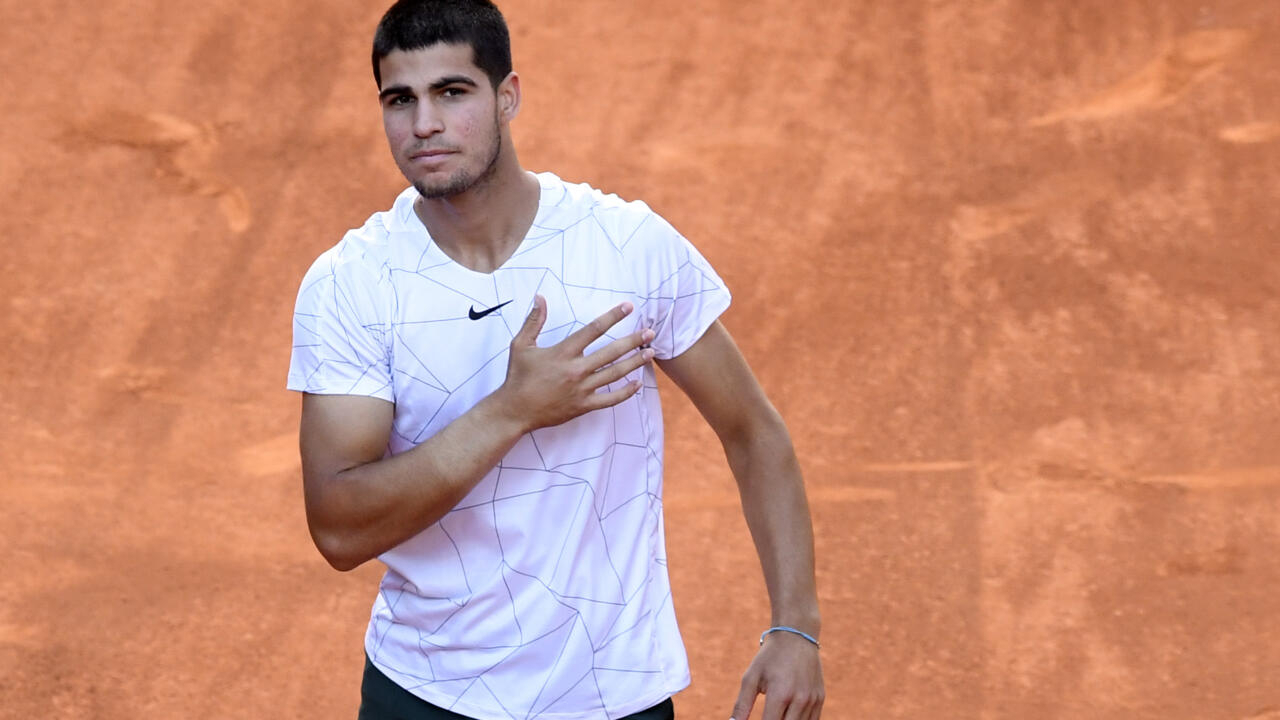 A year ago, with an adolescent face and a sleeveless T-shirt reminiscent of Rafael Nadal, Alcaraz discovered Roland-Garros.

Freshly entered the top 100, he crossed the qualifications with a bang and had climbed up to the third round, while his first Grand Slam.

A few days earlier in Madrid, he had celebrated his 18th birthday face "Rafa", which had not made him a gift: the young Spaniard had scored just three games.

Alcaraz was then announced as a nugget full of promise.

Everything has accelerated at breakneck speed since then for the child of El Palmar, a small town in the suburbs of Murcia (south-east), who came to tennis at four years old from his father, a former high-level player who became a leader of the local tennis club.

Twelve months later, "Carlitos" lives a breathtaking spring: he offered his first two Masters 1000 trophies in Miami early April and early May in Madrid, and was crowned in Barcelona meantime.

In the Spanish capital, he impressed people scrubs quick succession Nadal king of ocher, and Novak Djokovic, world No.1, unheard of in the same tournament on clay.

Beyond that, he has only had three defeats in 2022, for 28 wins and four titles.

So much so that Alcaraz is approaching his second Roland-Garros in the shoes of the world No.6.

And favorite, with Djokovic.

He feels ready to assume this brand new status and does not hide his ambitions.

Carlos Alcaraz (g) and Rafael Nadal before their quarter-final at the Madrid tournament, May 6, 2022 OSCAR DEL POZO AFP / Archives

"I take it as a source of motivation, not pressure," he felt after his success in Madrid, smile both carnivorous and disarming.

"I'm not afraid to say that I'm ready to win a Grand Slam (tournament), he told the Argentine daily La Nacion. I feel good physically. I'm strong mentally. I play well in this moment, with a lot of confidence."

"As we say with my team, physically, I'm a bull. I'm ready to play in five sets against the best, very long matches. It doesn't scare me. Better: it's an advantage", dares- he in the columns of the Spanish newspaper ABC.

“My goal now is to try to win one of the last three Grand Slams of the season, continues the one that Juan Carlos Ferrero, ex-world No.1 and winner of Roland-Garros 2003, took under his wing at 15 years in his Villena academy, a big hour from his home. We hope to get there in Paris."

With such a spectacular explosion, inevitably the looks change, the compliments rain, and the comparisons - with Nadal, question of nationality, precocity and determination - flourish.

In two days at the beginning of May, before and after his Madrid coronation, Alcaraz twice made the front page of the Spanish generalist daily El Pais.

"When we came back from Madrid, we stopped somewhere to eat, in an isolated place, where there weren't many people, but everyone recognized me. That's where you go expect you to become really famous," he says.

Carlos Alcaraz after his victory against Novak Djokovic (d) in the semi-final of the Madrid tournament, May 7, 2022 GABRIEL BOUYS AFP / Archives

Both Djokovic and world No.3 Alexander Zverev then called him "the best player in the world" at the time.

"He inspires me a lot. I admire him," said outgoing Roland-Garros finalist Stefanos Tsitsipas.

"It's a complete player, very aggressive, able to go very often to the net, he moves great. It will burn the steps very quickly. It'll be a fantastic player in the near future", prognosticated Nadal a year earlier .

No way for Alcaraz to get carried away.

"It's not because I won what I won very quickly that it goes to my head. I know very well that I have to keep working to achieve my dream, which is to to be N.1 in the world", he reframes.

When he triumphed in Madrid, it is to his roots he thought first.

"Vive El Palmar live Murcia", has he written on the camera presented to players.

"I am very family. I love being in Murcia with family and friends. I will never lose this DNA."