Elizabeth Born.. The second woman to head the Council of Ministers in the history of France

French President Emmanuel Macron has appointed the second woman prime minister, 30 years after the first woman in the country's history. This comes at a time when he is trying to win over the center-left voters. and Elizabeth Bourne, who has spent most of her career as a management consultant 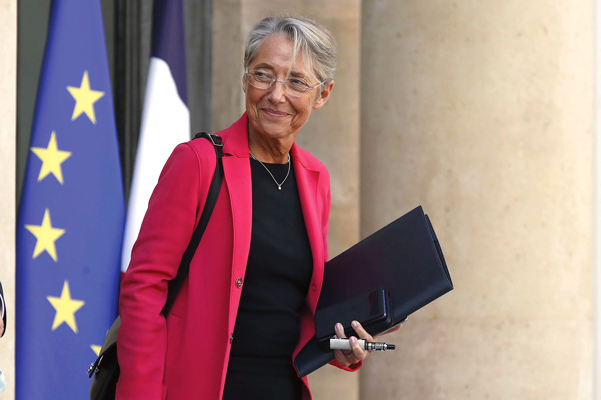 You take office during a very sensitive political period

Elizabeth Born.. The second woman to head the Council of Ministers in the history of France

French President Emmanuel Macron has appointed the second woman prime minister, 30 years after the first woman in the country's history.

This comes at a time when he is trying to win over the center-left voters.

Elizabeth Bourne, who spent most of her career as an adviser in Socialist-led administrations before joining Macron's team when he took power in 2017, will lead the president's centrist coalition in parliamentary elections next month.

The president said Bourne, 61, would focus on "the environment, health, education, full employment, the renaissance of democracy, Europe and security."

Her appointment ends his three-week search for a prime minister capable of giving new direction to the executive, following Macron's re-election as president last month.

The latter had promised to give the job to a woman, but turned down at least two on his shortlist, and had trouble finding a figure who would symbolize his commitment to environmental and social reform, without alienating the workers.

Bourne said she dedicates her success to "all the little girls", telling them to "never give up on your dreams" and that nothing should slow the struggle for the place of women in our society.

She is widely credited with performing efficiently as minister of labor in the previous government, when she oversaw measures to end the state railways' monopoly and reduce unemployment benefits in France.

However, she faced criticism from within Macron's camp, particularly for her technocratic style.

"It's as cold as an ice cube," an executive source told French media, adding that it might "keep voters away."

Some commentators have added that Bourne's relative lack of charisma may have tip the scales in her favour, given that the president does not want to be outdone by his prime minister.

France has never had a female president, while there was only one female prime minister, Edith Cresson, who held the position for less than a year after her appointment in 1991.

Controversies marred Cresson's brief tenure, including her claim that 25% of Anglo-Saxon men were perverts.

She was accused of racism when she compared the Japanese to "yellow ants trying to take over the world".

She was forced out of office after the 1992 regional elections.

Finally, Crisson, 88, denounced the French political class as "particularly backward" and said it was unusual for a woman to become prime minister.

Bourne's appointment is seen as a sign of Macron's desire to "mend bridges" in a country whose divisions were exposed during the presidential election campaign.

Although Macron, 44, scored a comfortable victory over right-wing populist Marine Le Pen, 53, in the second round of the elections, he is not acceptable to a large segment of the working class in France.

And the task of the Prime Minister is not easy in France.

The incumbents are expected to carry out the president's decisions, but they take few personal initiatives, and when things go well, the president is commended.

And when they make mistakes, the prime minister is expected to take the blame, allowing the head of state to rise above it.

Like much of the French political class, Bourne began her career in the upper echelons of the country's civil service.

She was a director, and official, in the Ministry of the Interior, Central, but she was also an advisor to a series of left-wing ministers, including the defeated Socialist Party candidate in the 2007 presidential election, Ségolène Royal.

Bourne has also held positions in the public sector as president of the Paris Transport Authority and director of strategy at the state railway company.

When Macron left the Socialist-led government in 2016 to launch his centrist party and then run for president, Bourne joined his team.

She was rewarded with ministerial positions, and held the transportation portfolio between 2017 and 2019.

It managed to rein in the railroad unions and end the lifelong job guarantee that employees enjoyed.

She was then assigned to the Ministry of Environment, before being given a job portfolio in 2020, and implementing a controversial unemployment benefits reform.

Although Macron is widely seen as having moved to the right since taking office in 2017, Bourne insisted in a recent interview, "I'm a left-wing woman, and social justice and equal opportunity are what I've fought for in my life."

• Born is widely credited with her efficient performance as Minister of Labor in the previous government, when she oversaw measures to end the state railway's monopoly and reduce unemployment benefits in France.

• The job of the Prime Minister is not easy in France.

The incumbents are expected to implement the president's decisions but take few personal initiatives, and when things go well, the president is commended.

France's prime ministers play an important role, but the country's constitutional framework gives presidents a more powerful position, and they often view their prime ministers as collaborators or subordinates, rather than independent policymakers.

In theory, French prime ministers have broad powers to "define and direct" French domestic politics, along with the Council of Ministers, in accordance with the French constitution.

In practice, they are usually assigned the task of carrying out the president's plans, although they are still important members of the executive branch, command a large number of employees in the arsenal of the French bureaucracy, and manage relations with Parliament.

Only, in the event that the president's political opponents win the parliamentary elections, can they force the appointment of a prime minister and cabinet to their liking, a situation which the leftist candidate, Jean-Luc Mélenchon, hopes, after his strong performance in the last presidential election, to achieve, in June, through a victory Left wide.

But "coexistence", as these periods between presidents and opposition prime ministers are known, has occurred only three times in France's modern history, and became less likely in 2000, when the timing and duration of presidential terms coincided with legislative ones.

French politician Elizabeth Born was born in Paris, her mother was a chemist, and her father was a Russian Jew who fled to France in 1939 and joined the resistance.

Her parents opened a drug lab after the war, but her father died when she was 11 years old.

She said her childhood "wasn't easy" after his death.

Bourne, a divorcee and mother of one child, is described as a workaholic and can be a hard-working woman, earning the nickname "totally burnt" at the Paris transport authority.

She says she rarely takes time off, other than going on picnics in the desert.

She once said that her greatest memory was walking through the so-called Valley of the Moon in Jordan.

"The state is not chauvinistic, but its political class," Edith Cresson, the only other woman to hold this position, between 1991 and 1992, told the Journal du Dimanche newspaper last week.

Asked by reporters about the historical symbolism of her appointment, Cresson said, "I'm amazed that people were surprised.

Moreover, this only surprises men!”, before adding, “Women are human beings with brains!”

However, the criticism has not stopped since her appointment.

After a public policy speech, anti-women jokes spread in the French parliament.

A television presenter addressed the "appearance" of the new prime minister and "the way to roll up her jacket sleeves."

Weeks earlier, the former prime minister said France was an "anomalous case" in Europe, where politicians such as Angela Merkel in Germany and Margaret Thatcher in Britain had dominated their countries' politics for decades.

She recalled that she was constantly attacked, including on her clothes, after she was appointed by the socialist president at the time, François Mitterrand.

"These are the same attacks that women in politics are being subjected to, today," Cresson added.