After he occupied Egypt for two days.. Thousands visit the Sphinx to check on his eyes &nbsp;

The Egyptian pyramids witnessed a historical turnout by the Egyptians to see the ancient Sphinx, which dominated discussions of social media platforms during the past days due to the spread of pictures showing his eyes closed as if he was sleeping. 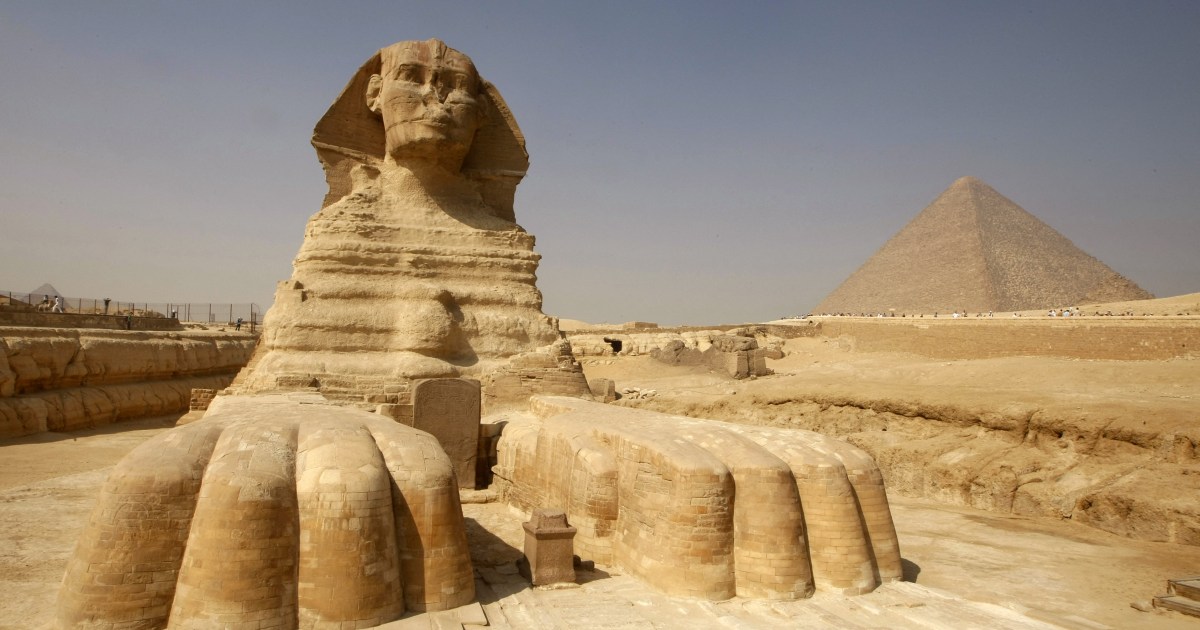 The pyramids area in Egypt witnessed a historical turnout of citizens to see the archaeological Sphinx, which dominated discussions on social media platforms during the past days due to the spread of pictures of him showing his eyes closed, and he seemed to be sleeping.

The pioneers of the communication sites circulated videos and photos showing thousands of people gathering in long queues waiting to obtain tickets to enter the statue area, and others in front of the statue taking pictures of him confirming that his eyes are open.

The "Sphinx" located in Giza Governorate (west of Cairo) is one of the most famous and oldest historical statues of the Pharaonic era, and it dates back to about 2500 BC.

The Sphinx Richa was a reality, so he said he would return to tourism pic.twitter.com/6uX8g5AMSS

The great demand for the Sphinx sparked a discussion about the impact of communication networks, which have become an essential part of users' lives, and how to take advantage of this spread (the trend) to promote tourism.

The digital media specialist, Fathi Shams El-Din, said that what was reported about “the Sphinx closing its eyes, it seemed (as if) a negative hashtag, but it had a positive impact, stressing that communication networks have great power over the crowd if they are used appropriately, and it can be Use it in tourism promotion, promotion of achievements and tourism service in general.

Shams El-Din demanded the use of communication sites in promoting famous Egyptian myths, as other countries do, and gave an example of the "Bran" castle in Romania, which is among the most visited castles in the world, because of its close association with the legend of the vampire Count Dracula.

The eye of God is not the eye of the Sphinx

The former Dean of the Faculty of Islamic Studies at Al-Azhar University, Dr. Mabrouk Attia, entered the trend of the Sphinx, saying, "We are preserved in the eyes of God, not in the eyes of the Sphinx," denying such rumors and attacking those who tried to spread them.

He wondered, "Didn't they all study in elementary school that bodies are stationary unless an external force comes to move them?"

And Sheikh Attia added in a video of him on his official Facebook page, "We forgot about physics, as we forgot our Lord. Will the Sphinx shut (it will shut) you, you know Photoshop and stir up unrest, and gather people on illusions?"

He indicated his desire that the world, which was established in order to close the eyes of the illusory Sphinx, be established for the real religion, and said, "God established the religion, and we dropped it, and we were attached to the crusts, and we wronged the woman in inheritance, and we killed her just for a rumor." (for) a soul?"

And accounts on the communication platforms had claimed that "the Sphinx suddenly became blindfolded", while others saw that this was just "fakes, superstitions and rumours."

For his part, archaeological expert and Egyptologist Ahmed Amer said that "the Sphinx's features have not changed for thousands of years, and it has not been affected by anything," according to what was reported by local media, including the (official) Akhbar Al-Youm newspaper.

Amer added, commenting on the video, "The statue has been a subject of controversy since ancient times, gossip and rumors, given its ambiguity and rarity in the ancient Egyptian civilization."

The newspaper also quoted an archaeological expert at the Ministry of Tourism, Magdi Shalaby, as saying, "The Sphinx is as it is, and no change has occurred to it."

He stated that "whoever published these pictures, he used Photoshop (photo-editing program), or he photographed the Sphinx at a certain angle of photography, which showed his eyes as if they were closed, nothing more."

They say the #Sphinx closed his eyes 😂

I checked my photos and this photo is from my photography on April 1st.. It really was 😴 pic.twitter.com/N4w9oOZHuf

I cut my arms that whoever discovered the dialogue of the eyes of the Sphinx is one. We, as men, will not focus even if he takes a bite and walks pic.twitter.com/C0D5qaBkIr

In pictures spread of the Sphinx with his eyes closed

, God willing, Photoshop will appear, it is not lacking in horror 😂 pic.twitter.com/fAzNFJaW0g