After the failure of its efforts to enter the Libyan capital, the Bashaga government holds its first meeting in Sabha and discusses the crisis of closing oil ports

The Libyan government mandated by the House of Representatives headed by Fathi Bashagha held its first official meeting today in the city of Sebha (southwest of Tripoli), after its efforts to enter the capital and hand over power from the National Unity Government failed. 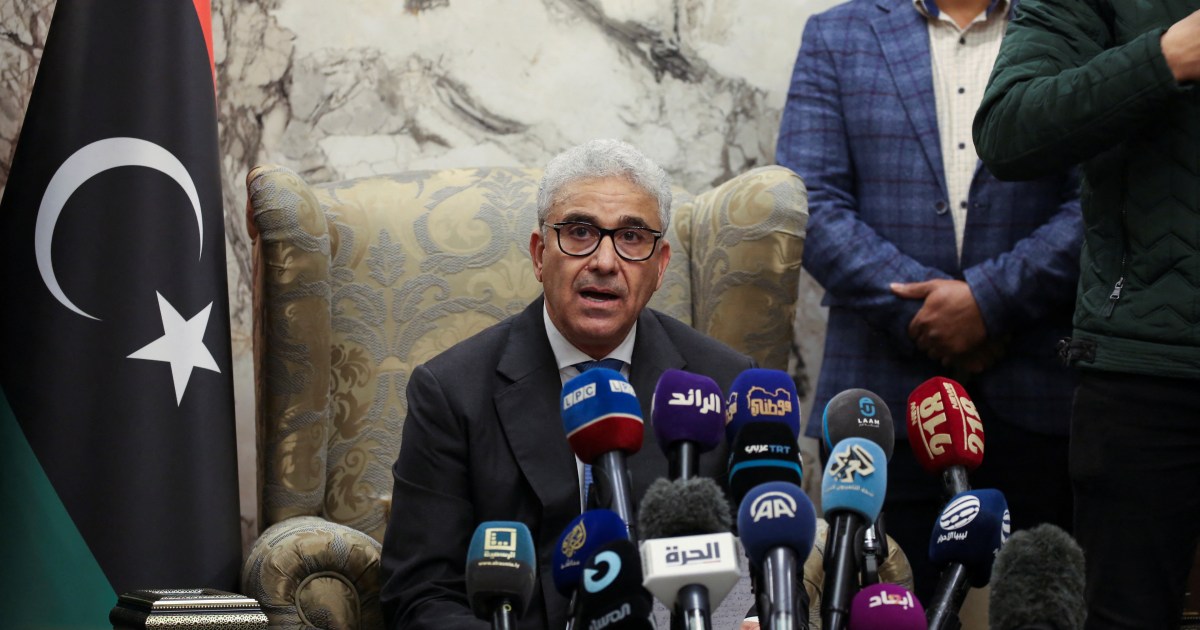 The Libyan government mandated by the House of Representatives headed by Fathi Bashagha held its first official meeting today in the city of Sebha (southwest of Tripoli), after its efforts to enter the capital and hand over power from the National Unity Government failed.

Libya is suffering from an escalating political crisis with a conflict between two governments: one headed by Fathi Bashagha, who was granted confidence by Parliament last March, and the second stems from political agreements sponsored by the United Nations more than a year ago and is headed by Abdel Hamid Dabaiba, who refuses to hand over power except through elections.

At the opening of the first meeting of the Council of Ministers, Bashagha said, "We open the first sessions of the government from the city of Sabha, the capital of the south, which has always suffered from exclusion and neglect.

He added, "Libya is not a booty to be seized by a particular person, government or family that believes that it can buy the country with the money of the Libyans. We are determined to conduct our business with a legitimate Libyan government emanating from the legislative authority in a transparent and impartial manner."

Referring to Dabaiba's refusal to recognize the Bashagha government and accusing the House of Representatives of "rigging" in the selection process.

During the past few weeks, Bashagha tried, through various mediations, to no avail, to enter Tripoli so that his government would "peacefully" take over power from Dabaiba.

Yesterday, Wednesday, the new government confirmed that holding its first meeting in Sabha comes before starting its work from Tripoli, without specifying a date for that, reiterating its commitment to pursuing the "peaceful option" to take over its duties in the capital.

The meeting of the new government headed by Fathi Bashagha coincides with a wave of closures of oil installations, behind which are protesters supporting his government who reject the continuation of the Dabaiba government in Tripoli, which caused a loss of 600,000 barrels per day;

Equivalent to half of Libya's daily production of crude.

The Libyan National Oil Corporation declared force majeure in the El Feel and El Sharara oil fields, while a similar measure included the Zueitina and Brega ports over the past three days, and the Libyan state relies heavily on oil revenues to finance its expenditures.

The "oil shutters" demanded, during video statements, "the exit of the national unity government headed by Dabaiba from the scene and handing over power to the government designated by Parliament headed by Fathi Pashaga."

The latter announced during the Sabha meeting that his government will discuss the reasons for closing the oil ports and the necessary treatments for the issue of managing oil revenues in a fair manner, as well as the necessary solutions to the problem of oil revenues, the draft law on the state’s general budget, the unified salary law and other bills.

Yesterday, Wednesday, Dabaiba directed the security and military agencies to take all possible measures to deal with the crisis of closures of oil fields and ports in the country.

At a meeting of the Council of Ministers of the Government of National Unity, Attorney General Sadiq Al-Sour called for an immediate investigation into the closures that took place in oil ports and fields and all those involved in them.

It is noteworthy that the Tobruk House of Representatives commissioned Fathi Bashagha in early February to form an alternative government to the government of Dabaiba, who refused to hand over his duties except to a government that comes through a new parliament elected by the people that ends all transitional periods in the country, and this caused a political crisis that escalated with fears of the country sliding into civil war.