"Mistake of historic proportions": what could be fraught with Sweden's accession to NATO

The Swedish government has officially decided to join NATO, Prime Minister of the Kingdom Magdalena Andersson said. She noted that the permanent representative to the alliance will soon submit an application, and then Stockholm will send a written request. Ankara, however, does not share the optimism of the Swedish partners. According to Recep Tayyip Erdogan, Turkey cannot say yes to the membership of these countries in the military bloc, since Stockholm and Helsinki are too hospitable towards those who are considered terrorists in Ankara. In Russia, the desire of Sweden and Finland to join NATO is called a mistake. According to Deputy Foreign Minister Sergei Ryabkov, the security of these countries will not be strengthened by joining the alliance. In turn, experts note that Stockholm, renouncing its long-term military neutrality, 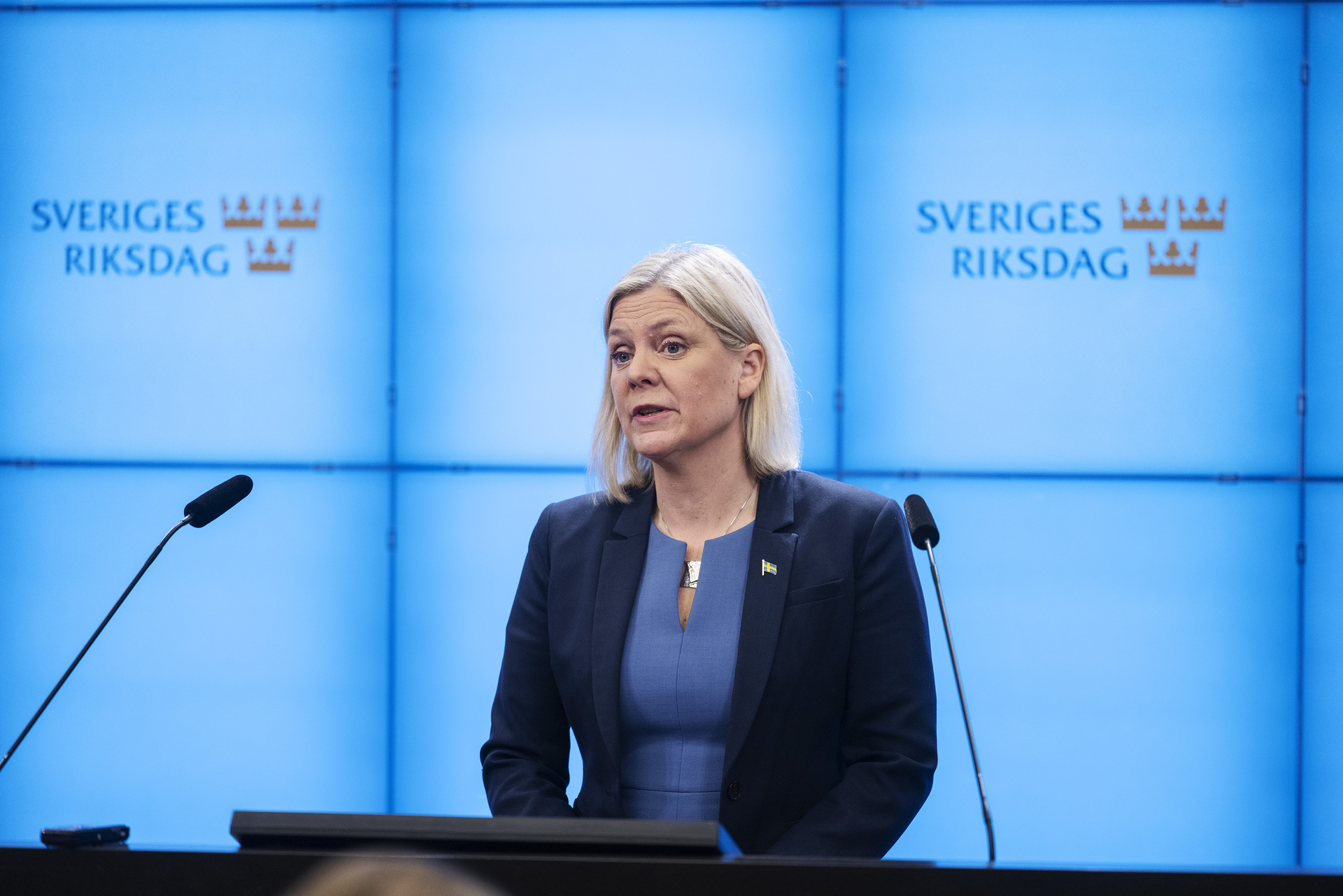 Sweden's leadership has made the official decision to apply to join the North Atlantic Treaty Organization after an overwhelming majority of parliamentarians voted in favor of the move, Prime Minister Magdalena Andersson said at a press conference.

“At a meeting on Monday, the government decided to apply to NATO.

The Swedish Ambassador will soon present it to the alliance.

Then Sweden will confirm its desire and ability to become a member of the defense alliance by submitting a written application, ”TASS quotes her.

The debate on joining the military bloc was held in the kingdom's parliament on the same day.

They also voiced criticism of such a hasty entry into the alliance.

According to Left Party leader Nushi Dadgostar, the decision-making process to apply to NATO was undemocratic, as voters' opinion on the issue was not taken into account.

“This undermines the legitimacy of the decision.

This process is a betrayal of the electorate.

The decision is made through the heads of citizens,” said Dadgostar.

The other day, she also spoke out on Twitter against NATO membership, opining that it could lead to an escalation in the region.

Joining the bloc at a meeting on May 16 was supported by the ruling Social Democratic Labor Party of Sweden.

According to Magdalena Andersson, Stockholm was pushed to this decision by a Russian special operation in Ukraine.

Europe, Sweden and the Swedish people live in a new, dangerous reality.

The European security order on which Sweden has based its security policy for centuries is now under attack,” she said.

In this regard, the politician noted that the party considers the best decision for Sweden to join NATO.

According to her, it was adopted after careful consideration and against the background of the fact that the country has been neutral for more than 200 years.

“The policy of not joining military alliances has served us well.

But our analysis shows that in the future it will no longer serve us so well,” Andersson emphasized.

She was supported by the Minister of Defense of the Kingdom, Peter Hultkvist, who made the statement that Sweden's non-alignment with the alliance is fraught with a lag for her in cooperation with the bloc.

Interference on the way

The aspiration of Sweden, as well as Finland, to NATO has not yet been approved by Turkey.

Thus, President Recep Tayyip Erdogan said on May 13 that Ankara is following the developments, but it "does not have a positive position" on the prospects of Stockholm and Helsinki.

According to him, Turkey does not want to repeat the mistakes with Greece (the countries joined the alliance at the same time in 1952, but relations between them remain strained due to a number of disagreements).

“Besides, the Scandinavian countries are an inn for terrorist organizations... In some countries they are even in parliament.

It is impossible for us to be in favor here,” the Turkish leader said.

At the same time, as Foreign Minister of the Republic Mevlut Cavusoglu emphasized on May 15 at a press conference following an informal meeting of the heads of foreign affairs agencies of NATO member states in Berlin, Turkey does not object to the expansion of the alliance, but demands not to maintain relations with terrorists.

“Here, of course, there must be guarantees in the field of security.

They must stop supporting terrorist organizations.

We have a completely open and clear position.

This is not a threat, this is not some kind of negotiations where we are trying to push through our interests,” he explained.

The minister noted that at the last meeting, he conveyed to the partners Ankara's concerns about Finland's and Sweden's ties with the Kurdistan Workers' Party (PKK), which is considered a terrorist organization in Turkey, and the People's Self-Defense Forces in Syria (considered by Turkey as an offshoot of the PKK).

On May 16, Erdogan reiterated that Ankara would not agree to the entry of Finland and Sweden into NATO, since these countries refused to extradite to Turkey those suspected of involvement in the activities of terrorist organizations.

The fact that the parties have not yet been able to reach an agreement on the future membership of the two northern countries, said in an interview with the SVT television channel, Foreign Minister of the Kingdom Ann Linde.

According to her, the country's leadership shares Turkey's belief that the PKK is a terrorist organization, but does not consider it true regarding the Kurdish formations in northern Syria.

“Just like the US and other NATO countries, we met with Kurdish organizations in northern Syria,” the minister said.

However, Stockholm intends to continue the dialogue with Ankara to resolve existing differences.

“We will send a group of diplomats to discuss and establish a dialogue with Turkey so that we can understand how this situation can be resolved and what the real issue here is,” said Peter Hultqvist.

At the same time, the minister stressed that Sweden received signals from NATO that it and Finland should be accepted into the alliance.

Russia promised not to leave Finland's and Sweden's plans for NATO membership without a corresponding response.

“The expansion of military infrastructure into this territory will certainly provoke our response.

What it will be, we will look at, based on the threats that will be created for us, ”Vladimir Putin said on May 16 at the CSTO summit.

At the same time, the president noted that Moscow has no problems with Finland and Sweden, and their accession to the alliance does not pose a direct threat to Russia.

Stanislav Zas, Secretary General of the Collective Security Treaty Organization, at a press conference following the summit, stated that the applications of Sweden and Finland testify to the militarization of Northern Europe.

“It’s hard to say how this will all end, but one thing is clear: these steps, including the expansion of the NATO bloc, will lead to increased tension in Europe,” Zas said.

In turn, Russian Deputy Foreign Minister Sergei Ryabkov, in an interview with reporters, noted that the security of Finland and Sweden would not be strengthened by joining the alliance, and also stressed that NATO should not have illusions that Moscow "will simply put up with it."

“This is another serious mistake with far-reaching consequences.

But what to do, such is the level of those who make political decisions in the respective countries today,” he said.

Experts interviewed by RT agree that Sweden's current course in NATO will not contribute to stability in the region and may provoke even greater tension.

“I think this is a historic mistake.

The current decision signals a rethinking of Stockholm's role on the world stage.

So far, the country acts as an independent player, free from military alliances and free to make decisions on foreign policy steps at its discretion.

However, after joining the alliance, Sweden will have to join the overall strategy and follow the policy of the bloc, ”explained Lev Voronkov, professor at the Department of Integration Processes at MGIMO.

According to him, the kingdom will also have to significantly increase its defense spending and possibly station foreign troops on its territory.

“Everything will depend on the conditions under which Sweden joins NATO,” the analyst said.

Vadim Kozyulin, head of the Center for Global Studies and International Relations at the Diplomatic Academy of the Ministry of Foreign Affairs of the Ministry of Foreign Affairs, Vadim Kozyulin, in a commentary to RT, noted that the entry of Sweden and Finland into a military bloc will complicate their relations with Russia, despite all the statements that they are taking this step against Moscow.

“Sweden and Russia have always had traditionally friendly relations.

There was mutual understanding even during the Cold War.

Today they are reduced to zero.

And this is a feature of the present moment, in which there is a pursuit to increase the degree in relations.

Perhaps Sweden and Finland themselves do not intend to threaten the Russian Federation, the alliance will threaten it, ”the expert said.

Lev Voronkov noted that the issue of membership of the northern countries today will be fundamental not only for Russia, but also for Turkey, for which it is not comme il faut to be in the same bloc with countries where "their ideological opponents in the face of the Kurds live."

At the same time, he expressed confidence that the parties would be able to find some kind of compromise.

“For Turkey, this is an important issue, but they can set conditions that the same Swedes and Finns can consider quite positively.

So I don’t see any insurmountable obstacles in this,” Voronkov said.

His opinion is shared by Vadim Kozyulin.

He suggested that Stockholm and Helsinki might at some points give way to Turkey on the Kurdish issue.

“They are unlikely to extradite the oppositionists and those whom Ankara considers terrorists, but they may establish some kind of communication at the level of the special services and some agreements that they will be more stringent regarding the issuance of visas for Kurdish oppositionists,” — the analyst said.

He also noted that Turkey, with its current position, will most likely be under all kinds of pressure now, especially from Washington.

“The United States is interested in Sweden and Finland, so they will now push through them.

Moreover, Turkey is unlikely to have an unshakable position on the Kurdish issue, because it is aware that Stockholm and Helsinki will not compromise their principles regarding those who have been given asylum.

Therefore, Ankara is using the current situation more to attract attention to itself,” Kozyulin summed up.