Behind the frenzy of growing vegetables on the balcony: What has the epidemic taught us?

China News Service, Beijing, May 17 (Reporter Yuan Xiuyue) "Wherever the Chinese go, they can find a way to grow some vegetables."   In the past, this phrase has always been used to describe the Chinese people's "vegetable growing complex". Whether it is on the balcony or in the yard of a foreign house, as long as they see an open space, the elders in the family will want to plant something. D 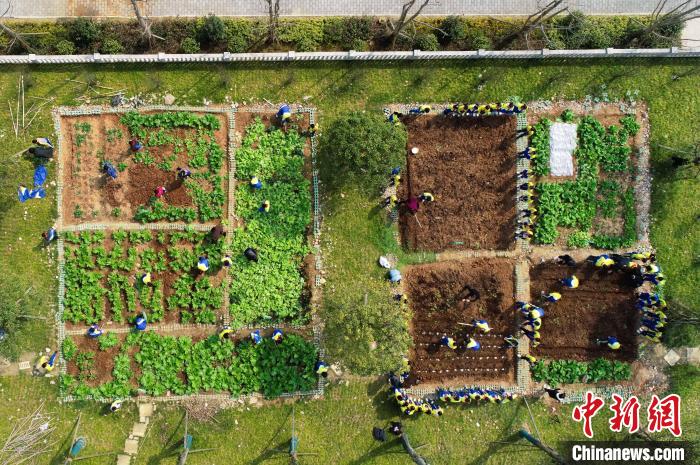 China News Service, Beijing, May 17 (Reporter Yuan Xiuyue) "Wherever the Chinese go, they can find a way to grow some vegetables."

In the past, this phrase has always been used to describe the Chinese people's "vegetable growing complex". Whether it is on the balcony or in the yard of a foreign house, as long as they see an open space, the elders in the family will want to plant something.

Data map: Students from Songtao No. 7 Wan Primary School in Guizhou experience potato planting at the labor practice base.

Growing vegetables in the current context is no longer exclusive to elders, but has also become a craze among urban young people.

According to the "2022 Balcony Vegetable Planting Report" released by the e-commerce platform, the sales of various vegetable seeds in the first quarter of this year soared year-on-year, and the number of purchasers increased by more than 100% for three consecutive years. Among them, Beijing, Shanghai, and Hangzhou became the cities with the largest number of seed purchasers.

Growing vegetables on the balcony is regarded as a new ten billion market.

In addition to the vegetable farming economy, this "urban farmer" lifestyle is also bringing subtle but non-negligible changes to the city.

Children play in the community garden.

"The power of the earth is too strong"

When it comes to growing vegetables, Wu Yue, who lives in Shanghai, has accumulated a lot of experience recently.

She usually likes to stock up, and all kinds of dried vegetables, fungi, and instant food "make up for what's missing", and during the epidemic, she is even more powerful.

But when shopping is inconvenient, vegetables have become the key protection objects at home.

The first time I planted celery under the remote command of my grandmother and my mother. The celery leaves were used to make steamed vegetables, the celery stems were used for frying, and the celery roots were planted in pots.

Wu Yue joked that she had never handled celery with such care.

After watering and basking in the sun, the celery root sprouts again in more than a week.

Watching the vegetable sprouts grow up slowly, Wu Yue couldn't help but sigh "the power of the land is too powerful".

On social platforms, there are many novice vegetable growers like Wu Yue. They scramble to share their planting process and exchange vegetable growing experience.

The veterans of vegetable planting shared their vegetable growing experience with the novices - what kind of vegetable is most likely to be successful, how to mix soil, how to apply fertilizer, etc.

The sudden epidemic has slowed down the busy life in the city, and has also allowed many people to regain this self-sufficient primitive way of life.

At the beginning of 2020, echo, an illustrator from Shenzhen, was obsessed with growing all kinds of beautiful flowers, thinking that "vegetables should be grown by elders".

Later, after being quarantined at home for more than two months due to the epidemic, she was bored. She accidentally inserted a piece of sweet potato into the soil and found that it soon sprouted.

She also planted garlic, spring onions and spinach roots, and found that growing vegetables was "faster and more delicious" than growing flowers.

After moving to a new home, she made plans in advance to grow vegetables and fruits on the balcony.

From watering guns to floor drains, to fill lights and double-sided green walls, she and her husband have been planning for a long time.

Seeing that many vegetables were sold out in the supermarket, she was not worried at all, "Because I have grown a lot of plants and have a lot of vegetables at home, it's the kind of 'have food at home, don't panic'."

"Peach Blossom Spring" on the balcony

Seeds will sprout within a day or two after being sown, and they will be served on the table in about two months. Some people tease them. The sense of accomplishment of growing vegetables > planting flowers > raising children.

In addition to the practical value of vegetables, the soothing effect of growing vegetables on people is increasingly valued, and some people call it "a good medicine for life."

Han Yijun, director of the National Agricultural Market Research Center of China Agricultural University, once explained that urban agriculture and balcony agriculture are extremely important ways to relieve the anxiety of urban people, and growing vegetables on the balcony plays an irreplaceable role in horticultural therapy to some extent.

Echo regards growing vegetables as a way to decompress herself, and the small balcony is her "Peach Blossom Spring".

"Last year I was very stressed at work, and I had to stay up late to work overtime to draw pictures for a while. Usually at this time, I would eat some sweets, just like other people shopping and drinking, I can get a moment of relief. I like drinking milk tea, but I got fat during that time. ten pounds."

Later, she became obsessed with growing vegetables and fruits. In her spare time, she was busy researching how to artificially pollinate and raise each variety. There were many "thunders" in the middle, but she did not find this process troublesome, but enjoyed it.

Vegetables and fruits grown by echo.

She said that since growing vegetables and fruits, no matter what happened to her at work, as soon as she got home, she sat on the balcony in a daze to see how many leaves had sprouted on this one, and how many leaves had grown on the other, just sitting there quietly. Looking at them is so healing.

"I just accompany them to grow, fertilize them, add light, properly water and prune them, and they give me back in a very good state. No one competes with you in the whole planting process, these plants belong to you Yes, the chaos of the world has nothing to do with you." She sighed.

The birds raised by echo.

During the epidemic in Shenzhen, echo shared the process of planting on the Internet, and many netizens were brought into the pit by her.

A doctor on the front line of the anti-epidemic told her that work is very stressful every day, and the most stress-relieving thing is to read her posts.

Many netizens are chasing updates in the comment area, and they are more concerned about how to eat the grown eggplants than echo.

In fact, the first person echo took "into the pit" was her husband.

Echo said that he writes code, and he used to think that life is about going to get off work, going home, playing games and watching dramas.

Now he likes to stay on the balcony and watch the green plants, and he has also designed a water circulation system shared by the green wall and the fish tank.

The water circulation system of the echo balcony.

"One morning, when the sun was rising slightly, he held his chin and smelled the fragrance of the flowers, and suddenly he said, 'No wonder Thanos is trying his best to live an idyllic life'."

Echo said that many people put the "idyllic dream" after retirement, and it is not too late to start now.

"Some people think that people who have money and spare time have the time to plant, but that's not true. It takes only ten minutes a day to water the flowers. I will also save the money for milk tea and buy a pot of plants. Without everyone As hard as you imagine, growing plants is a very enjoyable process.”

echo on the balcony.

Rethinking the relationship between man and nature

The craze for growing vegetables on the balcony is not a recent phenomenon.

In 2008, the UK launched a "Grow Your Own Vegetables" campaign to help urbanites without any farming experience learn how to turn balconies into productive vegetable gardens.

Sue Biggs, director-general of the Royal Horticultural Society, believes that gardening and getting back to nature have great benefits for people's health, especially their mental health.

At the beginning of 2020, he and his team launched a SEEDING campaign, advocating for neighbors to watch and help each other, and to cultivate and share seeds and green plants in a non-contact way, so as to rethink nature, think about life, and rebuild people who have been damaged by the epidemic. trust between.

Liu Yuelai shared that there was a "super activist" in the event-retired aunt Zhang Yongmei, who built her small courtyard into a shared garden, which also made the community environment better and better.

During the recent epidemic in Shanghai, she did not forget to share green plants.

Between the nucleic acid tests, she hangs the sterilized seeds or vegetable seedlings at the door, and passers-by can pick them up by themselves.

Under the epidemic atmosphere, her small courtyard has become a different kind of scenery.

In layman's terms, it is to mobilize and organize community residents to grow things together, use the corners of the community to improve the environment at no cost, or spend a little money.

Different from the traditional green space landscape dominated by government departments or professions, community gardens are designed to allow urban residents to participate in planting. Therefore, some scholars believe that community gardens seem to be creating a garden, but in fact they are creating a social public space. .

Today, with the gradual fragmentation and atomization of urban space, the social network and the relationship between man and nature have become closer.

"From the perspective of the development of modern society, the division of labor in society is becoming more and more refined, and people's daily lives are often systematically crushed." Liu Yuelai said that now some young people in many countries are beginning to try to reduce their dependence on materials and enter the In a low consumption state, look for a voice in production, such as keeping your own seeds, composting, planting things, etc.

In his view, this is an influential practice and an iconic reflective thought that echoes with their community gardens and the participatory community planning action it has spawned.

"We are also discussing future cities and future communities. Can our future homeland and nature be less contrasted, can we be more inclusive and truly form a resilient community of life? Lujiazui is not necessarily a skyscraper."

Liu Yuelai believes that returning to daily life and making it more active-in fact, growing vegetables on the balcony and community gardens are all doing such experiments, and we are also part of this experiment.

(At the request of the interviewee, some names are pseudonyms) (End)