The path of His Highness Sheikh Mohamed bin Zayed Al Nahyan, President of the State, is rich in a track record of initiatives and strategies that were established to build the pillars of comprehensive development in the country, in accordance with the best international standards and practices applied in the most advanced countries in the world. 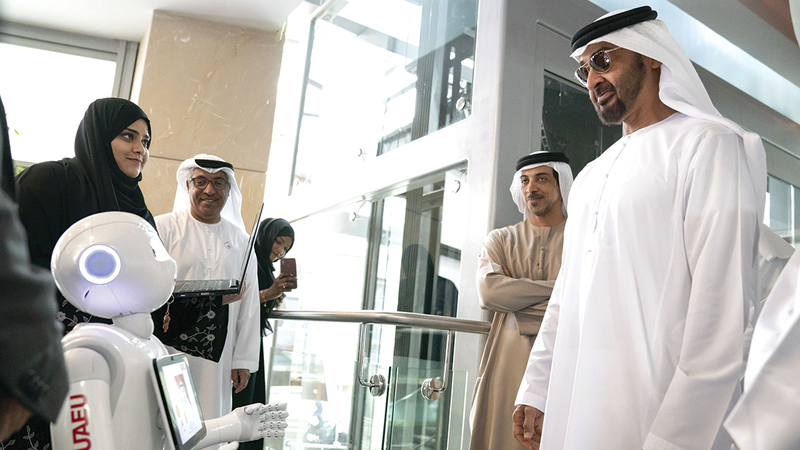 The path of His Highness Sheikh Mohamed bin Zayed Al Nahyan, President of the State, is rich in a track record of initiatives and strategies that were established to build the pillars of comprehensive development in the country, in accordance with the best international standards and practices applied in the most advanced countries in the world.

His Highness Sheikh Mohammed bin Zayed Al Nahyan has worked, since assuming his duties in various leadership positions, since the beginning of the nineties of the last century, to support and qualify young people to play their role and contribute to making the future. In 2018, the global initiative for UAE youth was launched, with the aim of strengthening the role of Young people globally and their empowerment, and His Highness said at the time that “youth are the mainstay of progress and development in any society, and it is the rising nations that invest in young people and work to rehabilitate and empower them and employ their capabilities in an optimal manner, because they are the wealth of the most precious nations, the resource that never runs out, and the main engine of the wheel Development, construction and progress in any country.

In September of 2019, His Highness Sheikh Mohamed bin Zayed Al Nahyan launched the "Emirates Experts" program, which aims to prepare a diverse base of national advisory cadres, which contribute to advancing development in various sectors in the country.

The first batch of the program included 20 citizens who participated in its activities to optimally prepare and qualify them to become future experts in 20 vital sectors, in line with national priorities, and in support of the state's vision and initiatives to build a knowledge-based economy.

His Highness stressed at the launch of the program that it "will contribute to establishing a rich base of expertise and national advisory cadres, by developing their skills and professional and personal tools to keep pace with the requirements of the current and future phases of the continuous development and development process that the country is witnessing."

His Highness added that the UAE leadership attaches great importance to employing the energies and capabilities of its people, to achieve the country's goals and its ambitious vision for the future, pointing to the importance of benefiting from national experiences with a history full of giving, work and knowledge.

His Highness Sheikh Mohamed bin Zayed Al Nahyan said, "The UAE lives today in a changing and fast-moving era, in which its people need to be always initiators and creators, and the UAE has the experiences that made the state, and that the leadership wants to enhance and develop these experiences and develop them professionally." .

His Highness stressed that the spirit of responsibility is the language of business, achievements and innovations, and that excellence lies in continuing learning, acquiring experiences from creative and inspiring statesmen, accompanying them, benefiting from their experiences, building on them, and developing them for the better.

In December of last year, His Highness launched a strategic partnership between the Abu Dhabi National Energy Company (TAQA), the Mubadala Investment Company (Mubadala), and the Abu Dhabi National Oil Company (ADNOC), enabling each of these companies to own a stake in the Abu Dhabi Future Energy Company. (Masdar), with the aim of developing a leading global portfolio of clean energy, in addition to strengthening efforts in the field of renewable energy and green hydrogen, in pursuit of achieving climate neutrality by 2050.

His Highness Sheikh Mohamed bin Zayed Al Nahyan stressed, at the time, that the UAE is continuing to consolidate its capabilities and leading role in the energy sector, and that it continues to transform challenges into opportunities and find practical and innovative solutions to secure a low-carbon future, to be one of the most important countries in the world in the production of clean energy. .

A few months ago, His Highness Sheikh Mohamed bin Zayed Al Nahyan, President of the State, announced the launch of 50 national projects, which will constitute a qualitative addition to the construction and development process, and a basis for moving towards further development for the benefit of future generations.

The new projects launched by the UAE government aim to achieve qualitative leaps for the national economy, which is a top national priority for the UAE government, and the main factor in ensuring a decent life for its people and future generations.

The implementation of these projects coincides with a series of qualitative initiatives that cover various vital sectors, enhance economic, social and human development paths, and create new opportunities in pivotal areas, such as entrepreneurship, the new, digital and circular economy, and the applications of the Fourth Industrial Revolution.

The new projects for the next fifty years involve the various institutions of the public and private sectors, and business communities, as well as competencies, experts and specialists from individuals, in future development paths, according to the principle of one team work, to work, coordinate, cooperate and integrate with each other.

• “Emirates Experts” is a program that aims to prepare a diverse base of national advisory cadres.

From the words of the head of state:

• «Youth are the mainstay of progress and development in any society».

• «Benefiting from national experiences with a rich history of giving, work and knowledge».

• «The state continues to turn challenges into opportunities, and find practical and innovative solutions to secure a low-carbon future».

His Highness Sheikh Mohamed bin Zayed Al Nahyan, President of the State, launched four social initiatives in 2018, aimed at improving the quality of life of citizens, providing integrated services to ensure social stability, in addition to strengthening the pillars of a voluntary and symbiotic human society, with a spirit of individual and collective responsibility towards society. .

The initiatives included the Abu Dhabi Social Support Program to enhance living standards and a decent life for citizens, doubling the number of approved housing loans for citizens to 5,000 annually, and approving three billion dirhams to develop basic axes and community facilities in the cities of Khalifa, Mohammed bin Zayed and Shakhbout. and "Zayed", in addition to launching the "Together" organization, to take responsibility for activating the system of participation and social contribution in the Emirate of Abu Dhabi.