Mauritanians practice their hobby and sing poems in elegy for the daughter of Jerusalem, Sherine Abu Akleh

The country of a million poets, whose name Shireen Abu Aqleh was associated with Jerusalem side by side, began practicing her hobby and scattering poems on Shireen's struggling spirit. 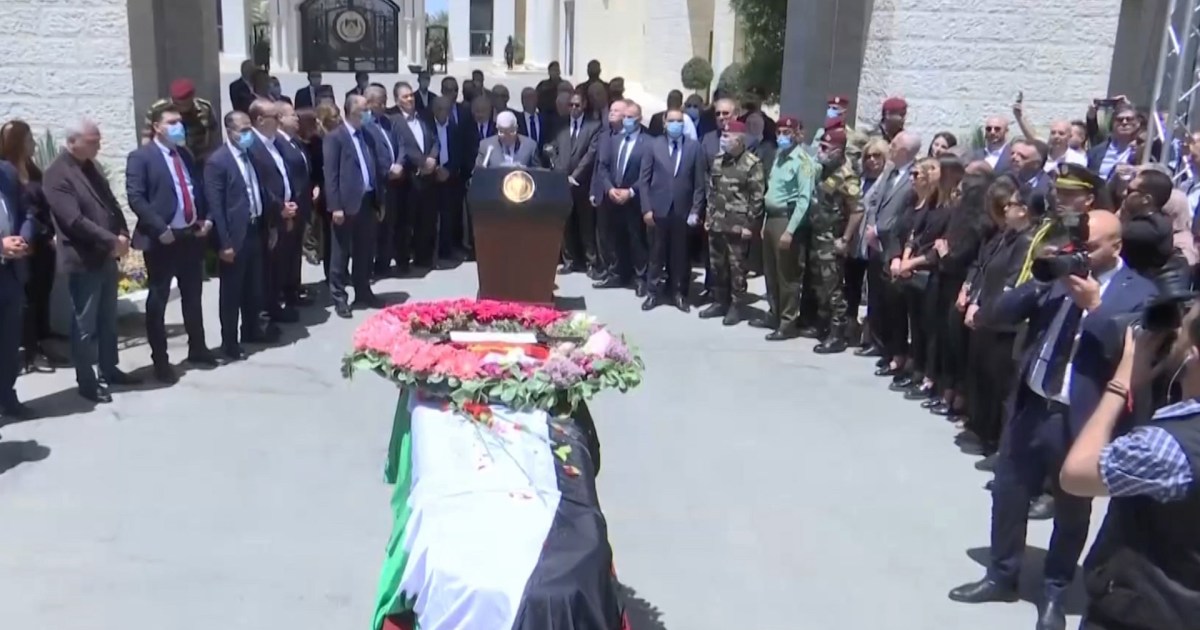 The news of her assassination shook the whole world, and people from all over the world were calling for her support and denouncing the crime she had missed. After the resounding crime of the Israeli occupation on the morning of last Wednesday, which killed Al-Jazeera correspondent in Palestine, Sherine Abu Aqleh, and following this sad news, the condemnable and sympathetic statements came from The various spectrums of Mauritanian society, its bodies and organizations, as if the incident had taken place in Mauritania.

The country of the million poets, whose name Shirin was associated with Jerusalem side by side, was not satisfied with this, but rather turned to practice her hobby and scatter poems on Shireen's struggling spirit, grief for the uncle of social networking sites that were filled with many messages of sympathy, and witnessed a wide interaction with prominent poets who published poems and poetic pieces In the lamentation of the martyr of the word, glorification, praise, gratitude and appreciation for what she offered to the city of Jerusalem and the Palestinian people.

The most noble humane behaviors of poets who brought them together with two heralds of love for Jerusalem and support for just causes and common human values, so they insisted on immortalizing their qualities in their poems and their grave sacrifices in order to convey the truth to the world.

The great poet and university professor, Dr. Al-Taqi Ould Al-Sheikh, was at the forefront of the solidarity poets, as he opened the campaign with a beautiful piece of poetry in the elegy of the Palestinian journalist Sherine Abu Akleh, and he posted it on his Facebook page, the poet says:

The fate of the slain is dear to us...

And we leave a happy killer

And Shireen had her in life... her creed and her deity

My God is the best of her creed... So the two of us, Abu Aqelah, are right

Passionate about their homelands

You will stay, even if you say goodbye....

Rich in our conscience the same

The epitaph won the admiration of hundreds of followers, and the poets interacted with it, and the poet Muhammad Nafeh Habib commented on these verses. On his page “Word over saying” and with the same sea and the same narration, he wrote farewell to Shireen and a testimony to her valor and sacrifice, praising her role in defending the Palestinian cause:

Your sky has fallen from the sky

I lived for the right icon....

I died on his way

I was for the "West Bank" a fortified shield... and I was a continuity for its captors

Jenin knows the vows in you... so I was pregnant with her banners

And this Jerusalem is crying lamenting a voice....

After the poet published these verses, the poet Didi Boon Al-Barkani commented on them with another saying:

Your life will remain the same

Your voice will remain stuck...

Rahim his cause is just

It makes the truth clear.... Years of its press, saying

That Sherine Abu Aqleh..... in her profession, she has walked virtuously

It was not arbitrary that these poetic pieces came on the sea of ​​the convergence with its musical rhythm inclined to intensity, as if the poets chose it carefully to express the extent of their sadness due to the loss of one of the holy voices of Jerusalem and the extent of their condemnation of the actions of the Israeli occupation. Since ancient times, poets have used this sea in their revolutionary poems rejecting injustice. And colonialism, and they usually resort to it in their poems of a nationalistic and enthusiastic nature.

Under this title, the Mauritanian poet and researcher al-Kharshi Mustafa Hammadi wrote a poem from Bahr al-Khafif with a light comment describing his condition after receiving the sad news, saying, "Now, I burn over a fire of sadness that matches the amount of sacrifice made by that kind soul that came only to burn distances, draw approaches to freedoms and renew." The map of the struggle, it is the kind, Shereen Abu Akleh.

The poet enclosed the following poem:

You have my heart and bullets are my fruit... O tongue above the wound is calling

And he calls if the boy is disguised... and if the war has blossomed, he will call out

He refuses only to show his face..... Under the Mongol war Al-A'adi

The October wind resulted in toxins... and the neighing of its horses in Baddad

You did not come, Sherine, an option.

Rather, it is a relief and a mercy for the servants

You are what you are. You are a generous sweat... and a light in the dark of the night

And nostalgia always calls for dawn....

And we sing in a handful of sand shady

You are what you are, you are the secret of survival...

And a life after a long sleep

You are what you are. You have revealed a poem....

And the sacred chant of recitation

And trigger will top all free....

Let them add, if they want, a trigger

The repetition in the poem came as an expression of the poet’s heartbreak, and revealed the extent of his grief over the deceased, as if he intended to draw the reader’s attention and draw the listener to the words that depict the severity of the crime.

Denouncing and standing in solidarity

The Mauritanian press organizations had also organized protest and solidarity vigils in front of the Al-Jazeera office in Nouakchott, and the bodies issued a joint statement condoling the family of the deceased and all members of the media field, and condemned in the strongest terms the assassination and the murder, according to what was stated in the statement.

The joint statement also confirmed the involvement of the Mauritanian press organizations in the international media effort to bring the perpetrators to international justice, considering that Shireen's blood that shed in Palestine and her spirit that rose in the vicinity of Jerusalem is the blood of every journalist and the soul of every free professional journalist who reveals the truth with courage and professionalism.

And the matter did not stop with the press, bloggers and poets. Rather, the severity of the crime provoked politicians. Former Mauritanian President Mohamed Ould Abdel Aziz posted on his Twitter account a tweet of condolence on the death of Sherine Abu Akleh.

Ould Abdel Aziz said that he extends his "sincere condolences to the speech after the assassination of the truth, to the Palestinian people in general, and to the family of journalist Sherine Abu Akleh in particular, with full solidarity with the Arab and international press family everywhere in the wide world."