Al Wahda Street, west of Gaza, is loaded with painful memories a year after the war

On a night during May a year ago, a common tragedy befell three Palestinian fathers, who lost their loved ones and their homes in an Israeli air strike on Al Wahda Street, west of Gaza City, and they have been haunted since then by the painful memories of the past. 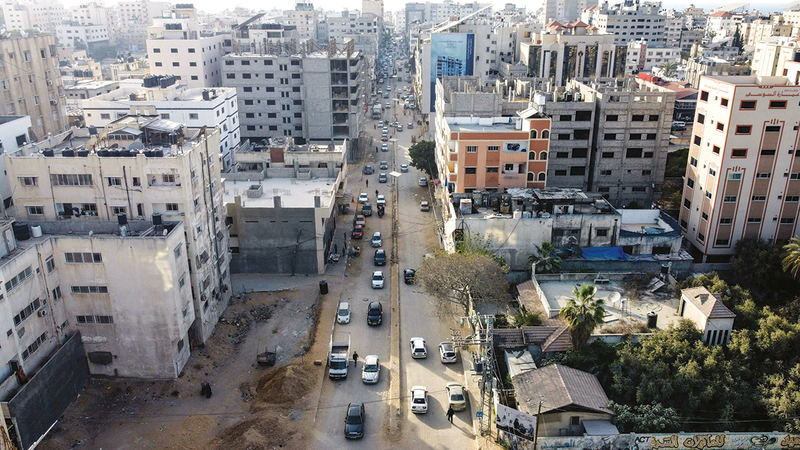 Survivors are among the victims unable to forget

Al Wahda Street, west of Gaza, is loaded with painful memories a year after the war

On a night in May a year ago, three Palestinian parents lost their loved ones and their homes in an Israeli air strike on Al Wahda Street, west of Gaza City, and they have been haunted ever since by the painful memories of the past.

Riad Ashkinna and his seven-year-old daughter, Suzy, escaped death, but lost his wife and four children.

He comes daily to his apartment in the destroyed apartment building on Al Wahda Street, in the west of the city, and says that he smells the scent of his sons and his wife.

Ashkinna, 43, remembers the night of Sunday 16 May, when he was watching the events of the war in Gaza on television.

He heard the sounds of violent air strikes that demolished his three-storey house, and he remained under the rubble for 12 hours.

He says, sighing, "I remember I was injured under the rubble. I heard my daughter Dana's voice screaming (Dad...Dad). I called her, but she didn't answer anymore." He points with his hand, "Here was the house, here they were playing."

About 45 Palestinians from the families of Ashkantna, Abu Al-Awf, Al-Kolak and Al-Afranji were killed in the violent bombardment carried out by the Israeli air force, targeting the "Gaza Metro", meaning the tunnel network affiliated with Hamas.

Riyad remembers, “The moment the building was hit, I rushed to the boys’ room. I saw my wife trying to catch them. Suddenly the roof of the house collapsed and the floor fell under me.” What is his voice?

When Riad was pulled out of the rubble, he was taken to Al-Shifa Hospital near his home, and then his brother informed him of the death of his wife, Abeer, and four of his five children.

"If 100 years pass, I will never forget them," he says, holding back tears.

Susie received psychological support sessions, but stopped because she was tired of the painful memories, her father says.

Riad lives with his mother, Suzy, and his new wife in an apartment near his destroyed home, which a local association helped him buy.

Why were they killed?

Um Riyad, 65, asks: "Why were these innocent children and women killed?"

(Um Riyadh), who used to live opposite her son Riad's house, remembers, "I was playing with my grandchildren in their house, and minutes before the bombing I left.

I'm shocked, I can't believe they won't come back," she said, adding, "I feel like we're all orphans."

In 11 days, 232 people, including 65 children, were killed in the Israeli air and artillery shelling on the Gaza Strip, and 1,900 others were wounded, according to the Hamas-affiliated Ministry of Health.

The toll includes fighters from Hamas and other factions.

The rockets fired by Hamas and the factions from the Gaza Strip towards Israeli territory killed 12 people, including two children and a soldier, and wounded 355 others, according to the Israeli police.

Israel imposes a strict blockade by land, sea and air on the border sector with Egypt, a narrow coastal strip inhabited by 2.3 million people.

Survivors of the Ashkinna, al-Kolak and Abu al-Awf families gather “painful” memories, according to Shukri al-Kolak, whose family lost 22 people.

Shukri's parents, his wife, three of his sons, three of his brothers, a sister and their sons were killed in their four-storey house, comprising eight apartments, and it was completely destroyed.

The building collapsed and Shukri remained under the rubble for 12 hours before being taken to hospital.

And survived by his sons Zainab and Osama.

He rented a house about three kilometers from his old house, trying to forget, but "this is impossible."

The Kolk does not want to marry a second time, considering that "no woman can coexist with my tragedy... death and life are equal to me."

Nightmares in the day

Alaa Abu Al-Awf lost 14 members of his family, including his wife Diana and his two daughters Shaima and Rawan.

He decided to stop psychological support for his surviving children, because it "reminds them of the pain."

Abu Al-Awf moved to live in an apartment hundreds of meters from his destroyed house on Al-Wahda Street.

He now lives with his second wife, their daughter, and 8-year-old daughter Maram, who survived the bombing.

During the war his supermarket was destroyed, but he established a small shop near his house.

He wonders, "Will the apartment building in which I was with my family and brothers be reconstructed?"

"Everything here reminds me of my wife, children and neighbours," he adds.

• During 11 days, 232 people, including 65 children, were killed in the Israeli air and artillery shelling on the Gaza Strip, and 1900 others were wounded.

• Survivors of the Ashkinna, Al-Kolak and Abu Al-Awf families gather “painful” memories, according to Shukri Al-Kolak, whose family lost 22 people.