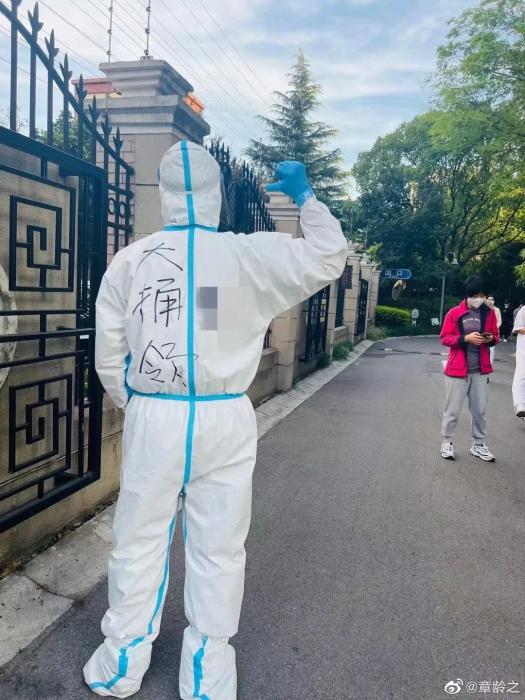 At present, on all fronts of epidemic prevention and anti-epidemic, there are young people fighting. They are not afraid of hard work and charge forward, showing the power of youth.

On May 4, the first episode of China News Agency's "East-West Questions, Chinese and Foreign Youth Dialogue" invited three young Chinese and foreigners to talk about the youth's responsibilities in the fight against the epidemic.

The "epidemic" line gathers the power of youth

"I just did the most ordinary thing, hoping to do my little to fight the epidemic in Shanghai," said Chen Long, a young Chinese actor.

Recently, he donned a green vest, held a loudspeaker, and became a volunteer in the community.

After becoming a volunteer, the first task Chen Long received was to assist residents to complete nucleic acid testing, "First of all, we must call everyone down, each household is different, some children are taking online classes, and some have not yet woken up. , At first, I went from house to house to call, and later, in order to improve efficiency, I simply rode a small motorcycle and ran and shouted in the community."

Le Gaixi is a French living in Shanghai. She speaks fluent Chinese and recently became a community interpreter.

Looking back over the past month, Le Gaixi said that her relationship with her neighbors has become closer, and she has a greater sense of belonging to Shanghai.

"Once I used the oven to help a neighbor roast lamb, and he gave me a bottle of Coke. Although it was a very small thing, it was enough to pass the warmth."

The "epidemic" line is written by young people

"After the outbreak in Shanghai, my mother and I integrated 54 tons of love dishes from multiple channels to support Shanghai within 24 hours." said Jiang Yiquan, a young Chinese-Italian young man, "My mother and I have been committed to helping fight the epidemic, and the epidemic just broke out in Italy two years ago. At that time, we assisted the Italian Ministry of Health to connect with Chinese infectious disease experts and exchange anti-epidemic experience online."

Talking about why he is enthusiastic about public welfare, Jiang Yiquan said that he was influenced by his mother.

"My mother is an overseas Chinese leader in Italy. When I was a child, I often saw her helping compatriots in difficulties. I was accustomed to doing my best to help groups in difficulties. While helping others, I also gained the meaning of life. and motivation."

In Chen Long's view, young people are the most active and energetic social forces, and they should be broad-minded and big-hearted.

"The prevention and control of the epidemic requires the perseverance of young people. The young people actively participated in the front line of anti-epidemic support such as medical rescue and service guarantees. While contributing their strength, they also planted the seeds of upward and kindness in the hearts of the next generation."

"Whenever my two sons call Dad from afar in the crowd, I can feel the pride in their voices. In fact, I want to say that Dad is neither a doctor nor able to protect Shanghai, but Shanghai is our home, If something happens at home, we have to shoulder the responsibility." Chen Long said.

The "epidemic" line is sharpened and the future can be expected

The epidemic has not stopped the young people from moving forward. They seize the opportunity, keep improving, and prepare for a better future.

She said that she enjoys the current state of life very much, and she can meet different people and gain different levels of cognition.

Affected by the epidemic, Chen Long has not been able to start work for the time being. He said, "I recently posted some short videos every day to share my life experience, and more importantly, to pass on an optimistic and positive attitude towards life to everyone. If the theme of Shanghai's anti-epidemic can be used in the future. On stage or screen, I want to play a volunteer and present a heartwarming story to the audience."

Le Gaixi founded a company in Shanghai two years ago that focuses on Sino-French exchanges and outdoor activities, and organizes some offline and online activities related to Shanghai's history and culture, such as outdoor script killings and city walks.

Talking about the future, she said: "I hope that the epidemic will pass soon, and more foreign friends will come to Shanghai to explore the beauty of this city together." (End)