The fluctuation of the epidemic in mainland China has dropped, and Shanghai has nearly 600,000 local infections in this round of epidemic

(Fighting against New Coronary Pneumonia) The fluctuation of the epidemic situation in mainland China has dropped to nearly 600,000 local infections in Shanghai this round of epidemic   China News Agency, Beijing, May 6th. Comprehensive news: China's National Health Commission announced on the 6th that 374 new confirmed cases were reported in mainland China on the 5th, of which 18 were imported f 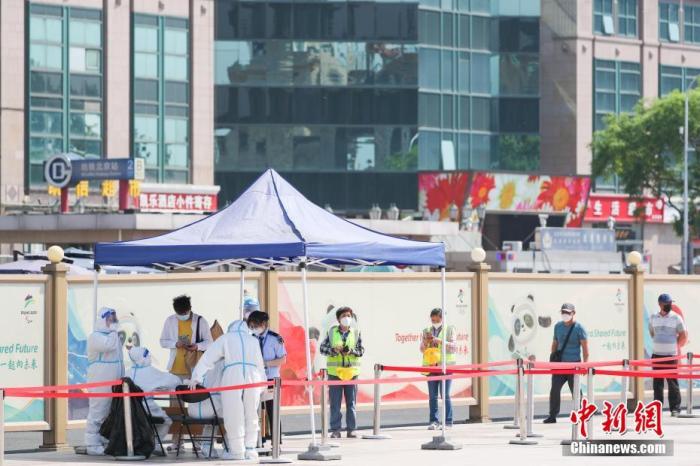 (Fighting against New Coronary Pneumonia) The fluctuation of the epidemic situation in mainland China has dropped to nearly 600,000 local infections in Shanghai this round of epidemic

China News Agency, Beijing, May 6th. Comprehensive news: China's National Health Commission announced on the 6th that 374 new confirmed cases were reported in mainland China on the 5th, of which 18 were imported from abroad and 356 were local.

There were 4,340 new asymptomatic infections, including 68 imported cases and 4,272 local cases.

The fluctuation of the epidemic situation in mainland China has decreased since the normalization of prevention and control, and the epidemics have all been imported from abroad.

On the 5th, the number of new local infections in mainland China continued to decline.

China's National Health Commission introduced on the 6th that since mid-April, the overall local epidemic situation in mainland China has shown a continuous fluctuation and decline. During the "May Day" holiday, the national epidemic situation was generally stable. From April 30 to May 5, the daily average There were nearly 5,800 new infections, a drop of 80% from the peak period.

Up to now, 21 provinces and the Xinjiang Production and Construction Corps are all low-risk areas. The overall situation of the national epidemic has improved, but it is still complicated and severe, and there is still a risk of rebound.

The National Health and Medical Commission stated that the recent epidemic prevention and control situation in Shanghai has continued to stabilize, the epidemic situation in Jilin Province is still in the final stage, and the risk of epidemic spread in Beijing has been reduced.

The epidemic situation in Nanchang City, Jiangxi Province has been effectively controlled, but the epidemic situation in Shangrao City needs to be strengthened in screening and control; Liaoning, Zhejiang, Henan and other places have recently reported new outbreaks with unknown sources of infection, and there is a risk of hidden transmission.

According to the National Health and Medical Commission, after the epidemic prevention and control has become normalized, all local epidemics in mainland China come from abroad. Therefore, it is particularly necessary to put more effort into "foreign prevention and import", strengthen source control in port cities, and strengthen immigration personnel, including Risk prevention of imported cold chain food and articles, weave a dense line of defense against "external import".

Up to now, Beijing has 18 high-risk areas and 30 medium-risk areas.

The infected persons involved in the first two clustered outbreaks caused many cases of co-resident infection due to the high density of dormitory residents.

On the 5th, Shanghai reported 4,269 new local infections (245 confirmed cases and 4,024 asymptomatic cases), and 12 new local deaths, all of which were the lowest in the past week.

Shanghai officials said on the 6th that since the current round of the epidemic, Shanghai has made every effort to promote the clearing and tackling.

Since April 22, the city's daily increase in the number of infected people has been on a downward trend for two consecutive weeks, and most of them have been found in closed areas and quarantined groups, and the risk of community transmission of the epidemic has been effectively curbed.

At present, 7 districts in Shanghai and some streets and towns in Pudong have basically cleared the society.

Since April 30, the Zhengzhou East Railway Station (high-speed railway station) epidemic has occurred in Zhengzhou City, and many staff members have been infected.

Because there is a certain risk of community spread and spillover from this epidemic, Zhengzhou City will implement the static management of "staying out of the area and strictly prohibiting gatherings" in the main urban area from May 4th to 10th.

Unfortunately, the Zhengzhou epidemic may have spilled over.

Xuchang City reported on the 6th that as of 8:00 that day, the city had reported 62 local infections (31 confirmed cases and 31 asymptomatic cases) in the current round of the epidemic, which was related to the Zhengzhou epidemic.

According to reports, at present, Xuchang City has completed three rounds of nucleic acid testing, and launched the fourth round of global nucleic acid testing on the 6th, carrying out the "knock-knock operation" in an all-round and carpet-like manner to ensure that no one household or one person is missed.

According to the development of the epidemic situation, Henan has upgraded epidemic prevention and control measures in many places.

On the basis of implementing the "static management" of the main urban area, Zhengzhou City further expanded the scope of the closed area; Zhoukou City issued an emergency notice on the 5th, announcing that the central urban area entered a state of emergency from the 6th to the 9th; Xuchang City has launched the highest level of emergency. Emergency response to fully block the virus transmission channel.

Shandong Province added 5 new cases of local asymptomatic infections on the 5th, and a total of 5,806 local infections have been reported in this round of epidemics.

Shandong Province reported on the 6th that the current situation of epidemic prevention and control in Shandong is stabilizing and improving. The number of newly infected people in Jinan and Yantai, where the epidemic situation was relatively concentrated in the previous stage, has dropped significantly recently. be effectively controlled.

Suzhou City, Jiangsu Province held a press conference on the 6th, saying that from 0:00 to 15:00 on the 6th, there were zero new cases of local infections in the city.

So far, Suzhou City has achieved zero social status for 7 consecutive days, and the epidemic prevention and control situation has continued to stabilize and improve.

On May 5, Suzhou City was adjusted to a low-risk area.

As one of the key areas of this round of epidemic in Jiangsu Province, Suzhou City has reported a total of 10 local confirmed cases and 203 asymptomatic infections since April 20.

While the epidemic situation in Suzhou was improving, a local epidemic broke out in Jiangyin, Jiangsu.

In the early morning of the 6th, Jiangyin City issued a notice saying that from the 3rd to the 4th, 2 new local confirmed cases and 41 asymptomatic infections were added in the city; 46 people were found to have abnormal results.

At present, the traceability of the city's related flow regulation is in progress.