Warnings about its impact on Egyptian-Libyan relations... Sawiris and Dabaiba's debate ignites Twitter

As usual for his controversial statements, the Egyptian businessman Naguib Sawiris clashed with the Prime Minister of the National Unity Government in Libya, Abdel Hamid Al-Dabaiba, where the two sides exchanged tweets on Saturday and Sunday, amid the interaction of a number of tweeters. 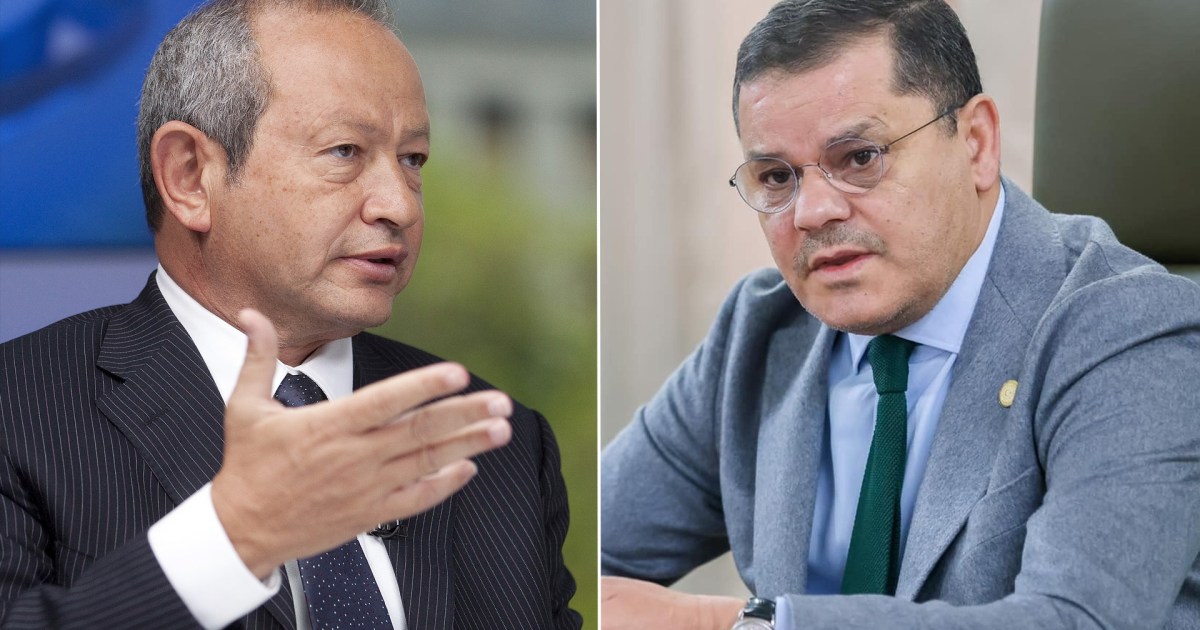 As usual for his controversial statements, Egyptian businessman Naguib Sawiris clashed with the Prime Minister of the National Unity Government in Libya, Abdel Hamid al-Dabaiba, as they exchanged critical tweets on Saturday and Sunday, amid the interaction of a number of tweeters, who split into two teams, each supporting one side, which seemed a kind of The tweet war.

The "battle" began with a tweet written by Naguib Sawiris, on Saturday, in which he attacked Dabaiba, saying, "History will remember that Dabaiba stood in the way of the stability of his country for his own personal interest... he preferred the position over the interest of Libya."

Hours later, the Prime Minister of the Government of National Unity published a tweet, in which he said, "It seems that you have misspelled the title .. This is Libya, history, the country of lions, and the home of decency, and not a striptease festival," referring to the El Gouna Film Festival organized by the Sawiris family in the southeastern tourist resort of El Gouna. The country is on the Red Sea, which witnesses frequent controversy because of the actresses' costumes, which some see as scandalous.

After the followers thought that the debate was over, Sawiris responded - on Sunday morning - by saying that he did not mistake the address, but Dabaiba made a mistake in the response. The issue is not an issue of festivals or decency, but rather the stability and future of Libya, and Dabaiba's wrong decision to hold on to power at the expense of a homeland, according to his description.

Sawiris added that he will see a culture and cinema festival in Libya in the future, as they are not an abomination from the devil, he said, and the funny thing is that he concluded his tweet by congratulating Dabaiba on the blessed Eid al-Fitr.

History will remember that Dabaiba stood in the way of the stability of his country for his personal interest...the position was preferred over the interest of Libya...

It seems that you got the title wrong.. This is #Libya (history), the country of the lions and the home of decency, not a striptease festival

I did not make a mistake in the title, but you made a mistake in your response and its style. The issue is not one of festivals or decency. The issue is the stability and future of Libya and your wrong decision to hold on to power at the expense of your country. Blessed Fitr https://t.co/QlV2wYD6vv

After years of battles and power struggles between two authorities in the east and west of the country, a unified government headed by Dabaiba was formed in February 2021, as part of a political process sponsored by the United Nations.

The government's task was set to lead the transitional period to presidential and legislative elections that were scheduled for December 24, but then it was not possible to hold them due to security, judicial and political obstacles.

And last February, the Libyan House of Representatives gave its confidence to a new government headed by Fathi Pashaga, to replace the government of Dabaiba, but the latter refused to give up his position except for an “elected authority.” With the exception of Russia, the major countries have not recognized the Pashaga government so far.

But two days later, Egyptian Foreign Minister Sameh Shoukry said - in a press conference with his German counterpart - that Cairo is in contact with all Libyan parties to promote stability, and that his country is interacting with its international partners to reach the elections that bring a legitimate elected government.

The exchanged responses between Sawiris and Dabaiba, sparked controversy among the tweeters, who were divided between two teams, encouraging one side or attacking the other.

One of the two groups attacked Sawiris for his interference in the Libyan affairs, and demanded that he take care of his country in light of the successive economic crises. .

Some also claimed that Sawiris' statements came after his meeting with the Libyan Prime Minister-designate Fathi Bashagha during the latter's visit to Cairo, which Sawiris also denied, stressing that he had never met Bashagha before.

Libyans expressed their astonishment at the Libyans' defense of Sawiris, and said that the crisis revealed what they described as the "Sawiris fans' association in Libya."

On the other hand, some attacked Abdel Hamid al-Dabaiba, and indicated that his response to Sawiris was not worthy of his position as prime minister, and that it would be better if he did not respond at all.

A third party feared turning the matter into a crisis between Egypt and Libya, denouncing the fact that some portrayed the matter as if Dabaiba was defending Libya against an Egyptian attack.

Some of them sarcastically suggested setting aside an official holiday in Libya as the "National Day of Tweet and Dignity."

I didn't know that Sawiris had all these lawyers and justifiers inside Libya.

Sorry, it hurt us without intending to.

It is true that Dabaiba’s response to Sawiris is not befitting a prime minister, even if it has expired

Sawiris is just a trumpet for the Sisi regime that wants a share of the Libyan cake by establishing projects in Libya, but he did not get anything, so he attacked Dabaiba

Sawiris is one of the pillars of the Sisi coup.. He

expresses his anger for not receiving the government of Bashagha..

This confirms that the government was made in the kitchen of the Egyptian intelligence. Therefore, they are angry..

We can say that Dabaiba is a patriot and the other Tartour is a client and a seller..

Naguib Sawiris did not distort Libya’s biography. What is meant by the tweet is Dabaiba as it is written.. Of course, Dabaiba’s response has nothing to do with professionalism or diplomacy... The tweet is clear on a unit of projects.. Mostly on the issue of the third mobile license that a strong rumor has seen # Tripoli_Libya pic.twitter.com /jBjzz0jsko

The words of #Naguib_Sawiris are 100% true and a fact that everyone knows…..Dabaiba lost his mind during months during which he sat on a chair with one list..a quarter of power…and preferred to plunge the country into division and mobilization even for war…without taking into account and giving priority to the nation’s supreme interest.

Frankly, what the Egyptian businessman Sawiris said is a reality and the one who defends Al-Dabaiba on the pretext that Sawiris is an Egyptian who does not have the right to interfere in a Libyan matter. How?#Libya

#Abdulhamid_Al-Dabaiba, the Prime Minister of #Libya, is

insulting in his response to the tweet of the engineer #Naguib_Sawiris

, the reason for the exchange;

Dabaiba’s termination of the coastal road contract that he signed with Egyptian companies for 4 billion dinars, including Orascom, as usual

, announcing a job that pays