With seven teams on eleven points, everything remains to be done at the top of the standings before the 24th day of the Top 14 on Saturday and Sunday, marked by the clash between the last two finalists, Toulouse and… 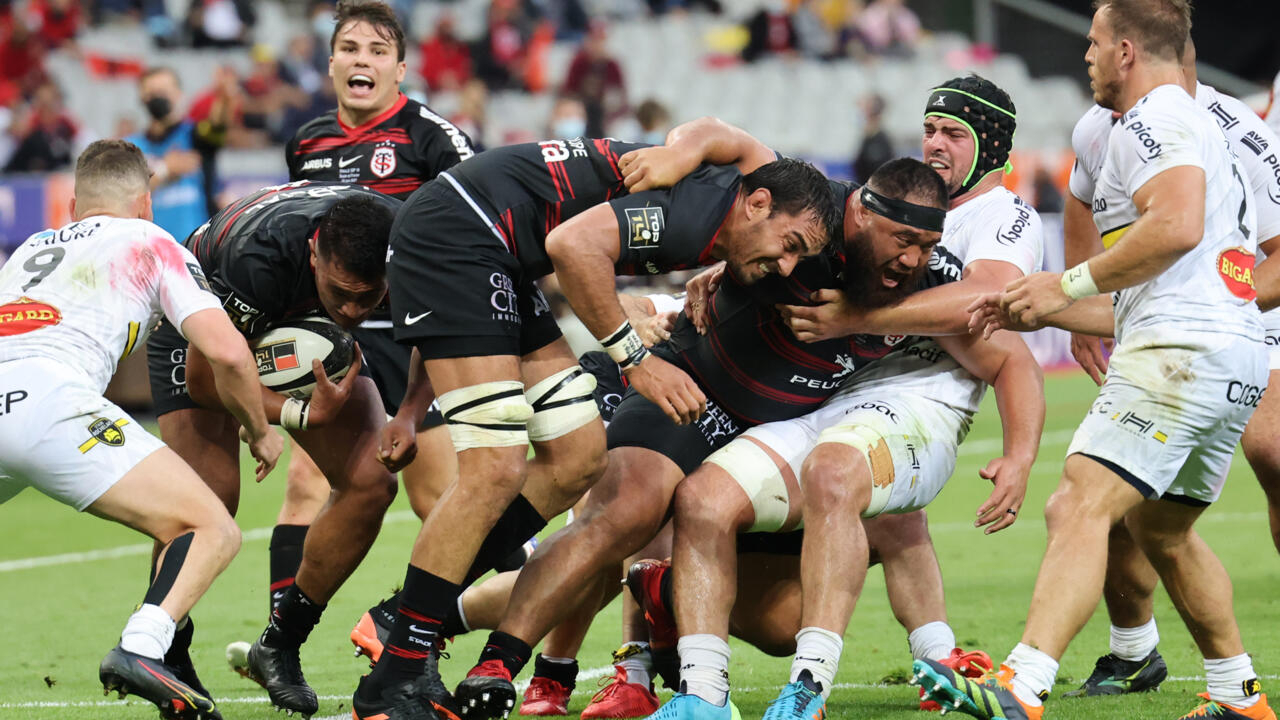 A taste of the final phase

We meet once again!

Toulouse and La Rochelle, finalists of the European Cup and of the Top 14 last season, will offer the Stadium, announced to sold-out crowds, a taste of the final phase, even if neither club is yet assured of the argue.

Les Rochelais, third, will present themselves in a more favorable dynamic, with only one defeat in their last nine matches in all competitions, thanks in particular to the return of their French internationals Uini Atonio, Grégory Alldritt and Jonathan Danty, left to rest over the weekend. end last.

The 3rd line of La Rochelle Grégory Alldritt is about to score a try against Bordeaux-Bègles, during their round of 16 second leg of the European Cup, on April 16, 2022 at the Stade Marcel-Flandreau XAVIER LEOTY AFP / Archives

Very much in demand since the Grand Slam of the Blues, Antoine Dupont and Romain Ntamack were also able to cut on the side of Toulouse, who find the bulk of their vital forces (Cyril Baille, François Cros, Matthis Lebel) for this clash of titans.

"They (the Rochelais) arrive in good shape at the right time. They come to Toulouse to take their revenge on last year, we know that," South African third line Rynhardt Elstadt told AFP. .

"We will have to show that we are there and that we still want to win the competition".

The defending champion, sixth, no longer has the right to make mistakes.

That's good: he beat the Maritimes in their last five meetings.

The joy of Toulouse scrum-half Antoine Dupontet of his teammates, after beating La Rochelle, in the final of the French Championship, on June 25, 2021 at the Stade de France in Saint-Denis Loic BARATOUX AFP / Archives

Montpellier to relaunch, UBB to confirm

Beaten on the wire (23-22) by his runner-up, Bordeaux-Bègles, the Montpellier leader will try to revive in Lyon, currently at the gates of the top 6.

The UBB will seek, for its part, to confirm this performance in its Chaban-Delmas stadium against the team in form of the moment, Toulon, still alive in the race for the top 6 after their victory against Toulouse (19-15) .

A match that should see the big return to the Girondin ranks of international back Matthieu Jalibert, long injured.

Burned by its messy first half against Biarritz and Pau's five tries in the first leg despite its defeat (35-29), Racing 92 is approaching its trip to Béarn with caution.

The Pau Section is "a team which is very well in place" and which, having nothing more to hope for or fear in this championship, "will be released", warned Ile-de-France coach Laurent Travers.

"When we see what they are capable of putting in terms of volume of play, we will have to be very vigilant".

Pau winger Daniel Ikpefan escapes a tackle from a Racing 92 player to score a try, during the 13th day of the Top 14, February 12, 2022 at the Paris La Défense Arena in Nanterre ALAIN JOCARD AFP / Archives

The other Ile-de-France club, Stade Français, currently 11th, has set itself the goal of spicing up its end of the season to grab 8th qualifying place for the European Cup.

This will surely go through a feat at the Michelin stadium, where Clermont will shoot one of its last cards for qualification in the final phase.

The relegation of the BO seems sealed for a long time already.

It could be formalized this weekend if the red lantern, 11 lengths behind the penultimate, Perpignan, does not win at home against Castres.

The pillar of Castres Wilfrid Hounkpatin scores a try against Biarritz, during the 7th day of the Top 14, on October 16, 2021 at the Stade Pierre-Fabre Fred SCHEIBER AFP / Archives

Usap still has a slim hope of avoiding 13th place, synonymous with a barrage of maintenance against the unfortunate Pro D2 finalist.

He will inevitably have to win in his Aimé-Giral stadium against the 12th in the standings, Brive, who has not won away since January 2021.