Real Madrid king of Spain! Leader from start to finish, Real won the 35th national crown in its history against Espanyol Barcelona (4-0) on Saturday, four days before the end of the championship,… 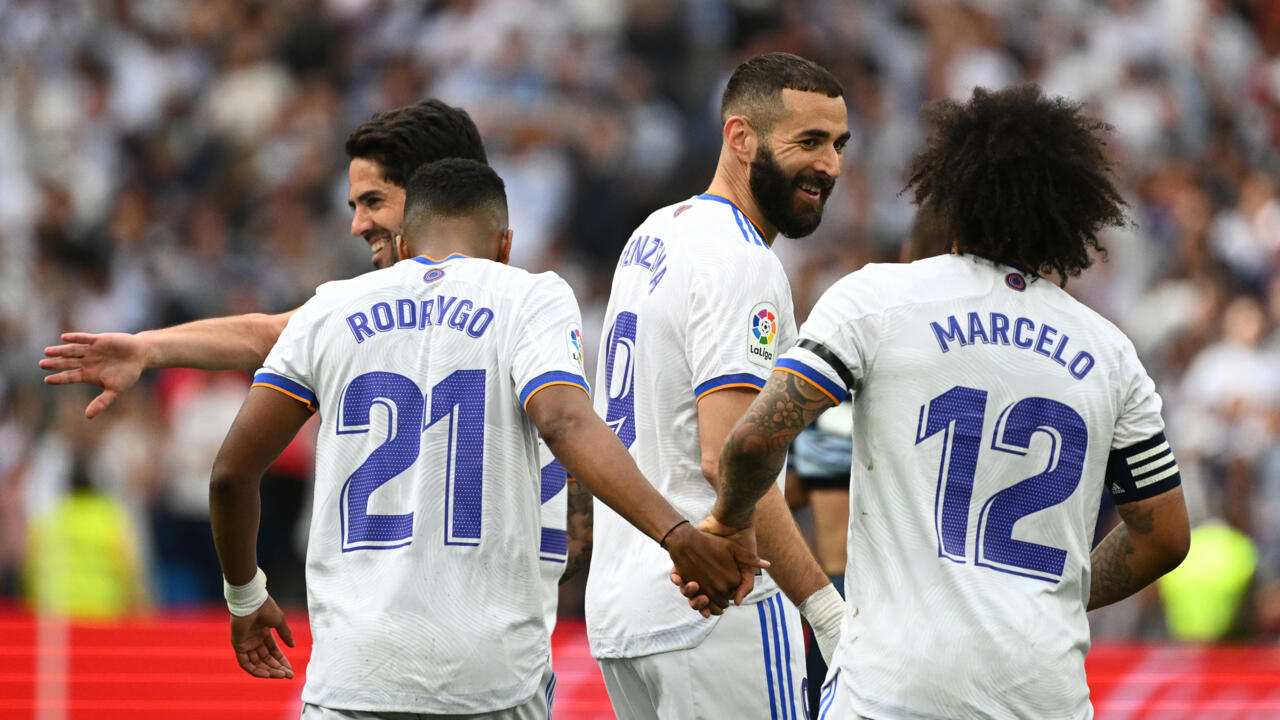 Without most of the executives, left to rest before the Champions League semi-final return against Manchester City on Wednesday, Real signed a festival to carry the blow: two goals from young Rodrygo (33rd, 44th), a third from Marco Asensio (55th), and a last of the inevitable Karim Benzema (81st), top scorer and best passer in La Liga.

Madrid are champions with 17 points ahead of their provisional runner-up, Sevilla FC, hung 1-1 by Cadiz on Friday.

Entering the hour mark, Benzema, wearing the armband throughout the season, left Marcelo, official captain and holder on Saturday, to lift the trophy in front of the nearly 80,000 spectators at the Santiago-Bernabéu.

And these are 250,000 supporters who are expected in the evening at the Cibeles fountain, the traditional place of celebration of the coronations of Real in Madrid.

For the Brazilian side, this title has a particular flavor: replacing Ferland Mendy all season, Marcelo, 34 years old on May 12, surpassed legend Paco Gento on Saturday and his 23 coronations, thus becoming the player who has won the most trophies within Real Madrid with 24 titles.

After two failures from Mariano Diaz with a header (13th, 22nd), the Madrid veteran served his young Brazilian compatriot Rodrygo, who opened the scoring (33rd) and the way to the title at Real Madrid, before doubling the bet just before the break (44th), still right.

(Champions, champions, in Spanish) in the stands.

And on returning from the locker room, Marco Asensio increased the gap at the conclusion of a counter (55th).

Isco's goal (72nd) was canceled for an offside position, but Karim Benzema had time to score the fourth, on a delivery from Vinicius (81st), to come within two goals of the legend Raul and his 323 goals.

With this new trophy, Carlo Ancelotti on Saturday became the first coach in history to win the five major football championships: he won in Italy with AC Milan (2004), in England with Chelsea (2010), in France with Paris (2013) and in Germany with Bayern (2017), before reigning over Spain.

Winner of the last La Liga won by Real Madrid at the start of the Covid-19 pandemic in 2020, "Zizou" left last summer, tired of criticism and a lack of support from leaders.

With his know-how, Ancelotti managed to build a healthy frame.

He kept a backbone of experience with Thibaut Courtois, Casemiro, Toni Kroos, Luka Modric, and Karim Benzema, and crafted a winning cocktail, with the hatching of Vinicius and Eduardo Camavinga, the confirmation of Eder Militao and Ferland Mendy, and the successful integration of David Alaba.

Real Madrid's Italian coach Carlo Ancelotti, before the match of the 34th day of LaLiga against Espanyol Barcelona, ​​on April 30, 2022 at the Santiago Bernabeu Stadium GABRIEL BOUYS AFP

Under his orders, Real took first place on the third day of the championship on August 28, and never left it to end up making it their throne.

The self-proclaimed Kings of Europe are aiming to overthrow Manchester City on Wednesday at the Bernabéu after a breathless 4-3 first leg to reach the final and give themselves a chance to add a fourteenth continental crown to their collection.