Former US President Donald Trump claimed that the Queen of Britain and her daughter-in-law, Prince Charles, Camilla, were vying with each other for his attention during a royal banquet, and he told British TV presenter Pierre Morgan on the new "Talk TV" station that the Queen was indeed a "legend of ... 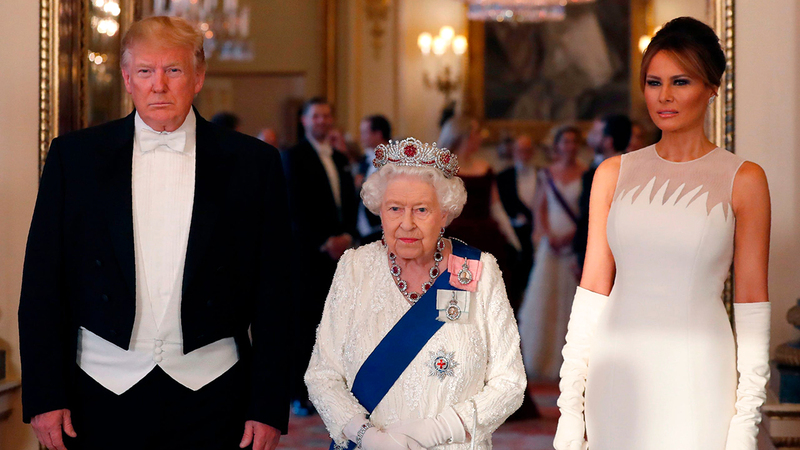 Trump, the Queen and his wife Melania during the royal banquet.

Former US President Donald Trump claimed that the Queen of Britain and her daughter-in-law, Prince Charles, Camilla, were vying with each other for his attention during a royal banquet, and told British TV presenter Pierre Morgan on the new "Talk TV" station that the Queen was indeed a "real legend".

Trump said he was accompanied by Camilla and the 96-year-old queen, during a party at Buckingham Palace in June 2019, where he attended the party with his wife Melania.

And he said in the second part of the interview, which was broadcast the day before yesterday, that Camilla was on his right, and the Queen on his left, and they were busy talking, and Trump said, "I told the Queen that I really wanted to talk to her (the Queen) even a little bit." Camila was funny, smart and wonderful, I loved her and I loved Charles too.”

Trump claimed that the Queen had never had such a wonderful time, as when he was sitting next to her.

"I was sitting next to her and we talked all night, and one of them said, 'We've never seen the Queen laugh this much before. She was laughing and smiling,'" he added.

"Everyone said they had never seen such happy times at a state banquet," Trump said.

And you know that such occasions are usually boring.”

In another question during the interview, Trump criticized Prince Harry's terrible choice to leave his grandmother and Prince Philip Mass.

Trump said it was the worst decision Harry had made in his life, and criticized him sharply;

Because he did not respect his grandmother the queen.

He urged the Queen to strip Harry and his wife of all their titles.

Trump added that the Queen should prevent Harry from visiting her in Britain, and she should tell him, "I honestly don't want to see you here."

"Honestly speaking, I don't really like Meghan, Harry's wife, and I'm not a big fan of her," Trump said.

I think poor Harry married her against his will.” When Morgan asked him if he thought Meghan and Harry's marriage would end soon, Trump confidently replied, "I've always been a good (forecaster), you know, and (predicted) almost everything.

Yes, this marriage will end and will end badly.

Perhaps Harry will come crawling back and be very sorry.”

"The only thing I disagree with the Queen is, I think she should have said to Harry, 'If that's the choice you want, we'll strip you of all your titles, and frankly don't come back here,'" Trump said. "It was a blatant disrespect for the country." And I think it was a huge embarrassment, too.”