News summary on the way home from work, Subsletter Evening. On the 10th of next month, on the day of the inauguration of the new president, a dinner is scheduled. 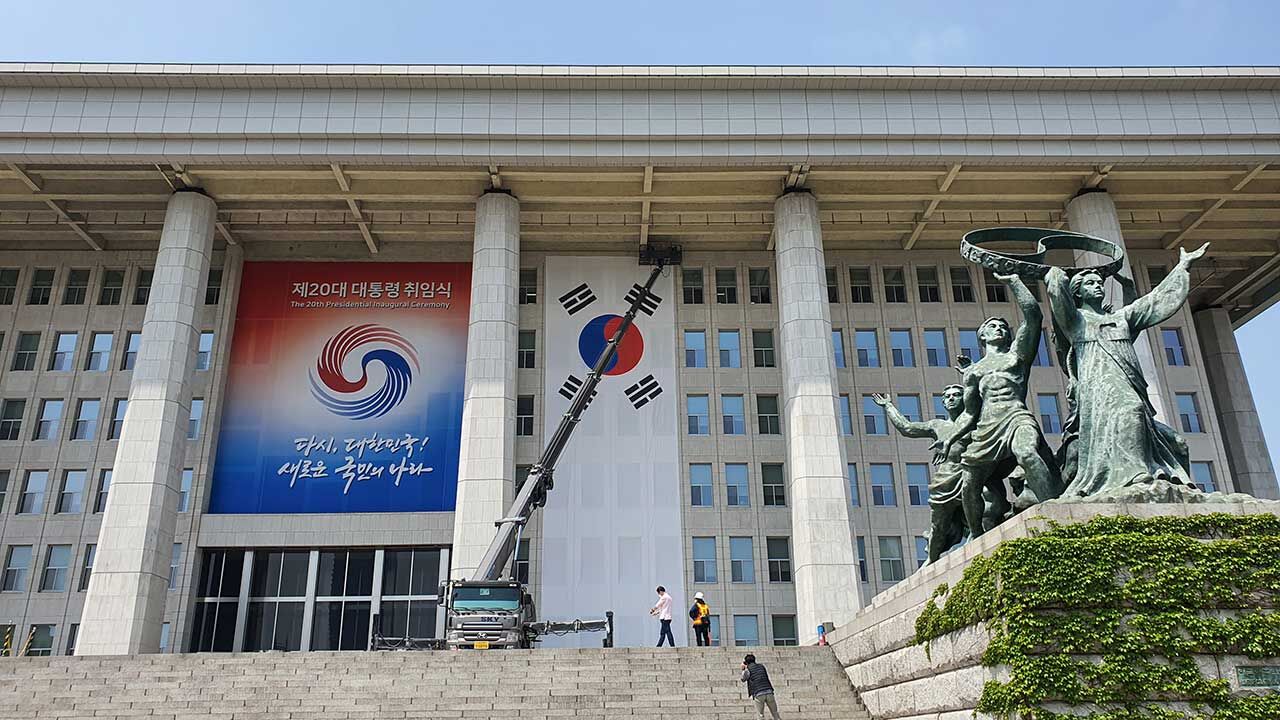 On the 10th of next month, on the day of the inauguration of the new president, a dinner is scheduled.

The Democratic Party, which has criticized it as a 'luxury version', compared today (27th) to the 'Qin Shi Huang coronation ceremony'.

Chairman Park Joo-sun, who oversees the preparations for the inauguration ceremony, explains step by step that it is not a luxurious version, and refutes, saying, "Isn't it possible to have a banquet attended by guests such as foreign heads of state in a stall or in a tent village?"

Yun Ho-jung "Are there a coronation ceremony for Qin Shi-hwang?"

“It’s not even the coronation ceremony of Qin Shi Huang, but the inauguration ceremony of the luxurious version of President-elect Yoon deepens the sigh of the people.” “The splendid lights of the luxury hotel, which were fully chartered, deepen the people’s anxiety, and when 558 high-end cars cross the road, the public’s resentment will increase even more. It will,” he said, pointing out that the inauguration dinner was a luxury version.

I would like to say something on behalf of the people's aching hearts.

The splendid lights of the luxury hotel, which were fully chartered, deepen the people's anxiety, and when 558 high-end vehicles cross the road, the public's resentment will increase.

It's not too late now.

The simple and frugal inauguration ceremony will have to weigh the sighing of the people.

Now is not the time for an exciting inauguration party.

I hope you will pay more attention to the voices of small business owners who are having a hard time every day, the disabled who are appealing for the right to move, and the voices of all suffering people.

The Blue House will be open from May 10, when Yoon-elect takes office, and the venue for the inaugural dinner is set at the Shilla Hotel guesthouse, not the Blue House guesthouse.

Chairman Yun Ho-jung criticized this by expressing it as 'the flashy light of a luxury hotel'.

Park Joo-sun "It's nonsense and a political offensive"

In response, Park Joo-seon, chairman of the Presidential Inauguration Preparatory Committee, countered that "it is absurd and a political offensive," and explained in detail the reason for choosing the dinner venue as the hotel guesthouse.

To hold a dinner at the Blue House guesthouse, access must be restricted from early in the afternoon due to security issues.

The banquet venue was decided as the Shilla Hotel's guesthouse, hoping that this would cause inconvenience to many citizens who visited the Blue House and would result in a loss of light from the first day of bringing the Blue House into the arms of the people.

(..) Even if the dinner is held at the Blue House guesthouse, travel expenses are included because the hotel cooks and other hotel ingredients are brought to cook.

Chairman Park emphasized that the National Assembly set the cost of the inauguration ceremony costing more than 3.3 billion won before the election without knowing who would be elected. That's it.

I would like to introduce one more remarks made by Chairman Park Joo-sun.

Before the press conference today (27th), I interviewed CBS Radio's 'Kim Hyun-jung's News Show', where he said, "Isn't it possible to go to a food stall or a tent village for a dinner attended by foreign heads of state or foreign guests?" I want you to think about it as a courtesy to the guests who came to celebrate the inauguration.

◇ Moderator: Nevertheless, the Shilla Hotel may have some symbolism.

It is the most luxurious hotel in Korea.

The people are in a very economically difficult situation as they have been suffering from Corona for two years now, and I think the people might be a little disappointed because of the situation.

How do you see it?

◆ Park Joo-seon> The president's inauguration ceremony is a national event prescribed by law, and is it not possible to go to a food stall or a tent village for a dinner attended by foreign heads of state or foreign guests?

Who will attend the inauguration of the new president?

Chairman Park Joo-seon said, "Yesterday (26th), I visited former President Park's private residence and delivered a personal message and an invitation letter for the inauguration ceremony with Yoon's handwriting. Thank you for revealing it.'" He explained the details of the meeting and exchanges related to the invitation to the inauguration ceremony.

"There was always a friendly conversation in a friendly atmosphere. Also, former President Park said that although he was concerned that a long-distance trip to Seoul for more than three hours would be unreasonable given his current health, he said to the last president-elect that he would attend the inauguration ceremony when his health is restored. He told me that he would attend this inauguration ceremony by working hard on exercise and rehabilitation as much as he gave me.” (Park Joo-seon, Chairman of the Presidential Inauguration Preparation Committee)

It seems to be a scene that symbolically shows many things.

This is what Chairman Park Joo-sun said in a CBS radio interview.

◇ Moderator: Is this also a dimension of national harmony?

◆ Park Joo-sun: Not only was the precedent the same, but national unity is also meaningful. It would be better if the former president appeared in the inauguration of a new government, but in the case of President Lee Myung-bak, he cannot come out because he is currently living in prison, and even his wife came to congratulate him. Wouldn't it be a little more meaningful if you do it and do it?

Regarding the invitation of former Gyeonggi governor Lee Jae-myung and former lawmaker Yoo Seung-min, who were rivals of Yoon-elect in the last presidential election, Chairman Park Joo-seon said, "It may not be polite because it is unprecedented and there is a risk that it will remind you of the painful wounds of defeat or make it worse if you do it wrong. I made a tentative conclusion not to do so," so I can't see former Governor Lee Jae-myung or former lawmaker Yoo Seung-min at the inauguration ceremony.

It is said that about 700 hidden heroes who have dedicated and sacrificed for the country are invited to the inauguration ceremony.

A time for parting without promises.

It was the war that separated the couple.

It's a sadder picture the more I look at it.

As his husband and his wife say goodbye to the battlefield in Uz Horod, Ukraine, head-to-head, the couple's feelings seem to extend beyond the photograph.

How many times did the war cause such a breakup?