MotoGP: French doubled at the Portuguese Grand Prix, Quartararo wins ahead of Zarco

Frenchman Fabio Quartararo (Yamaha) easily won the Portuguese MotoGP Grand Prix on Sunday ahead of his compatriot Johann Zarco (Ducati-Pramac) and thus takes the lead in the world championship. 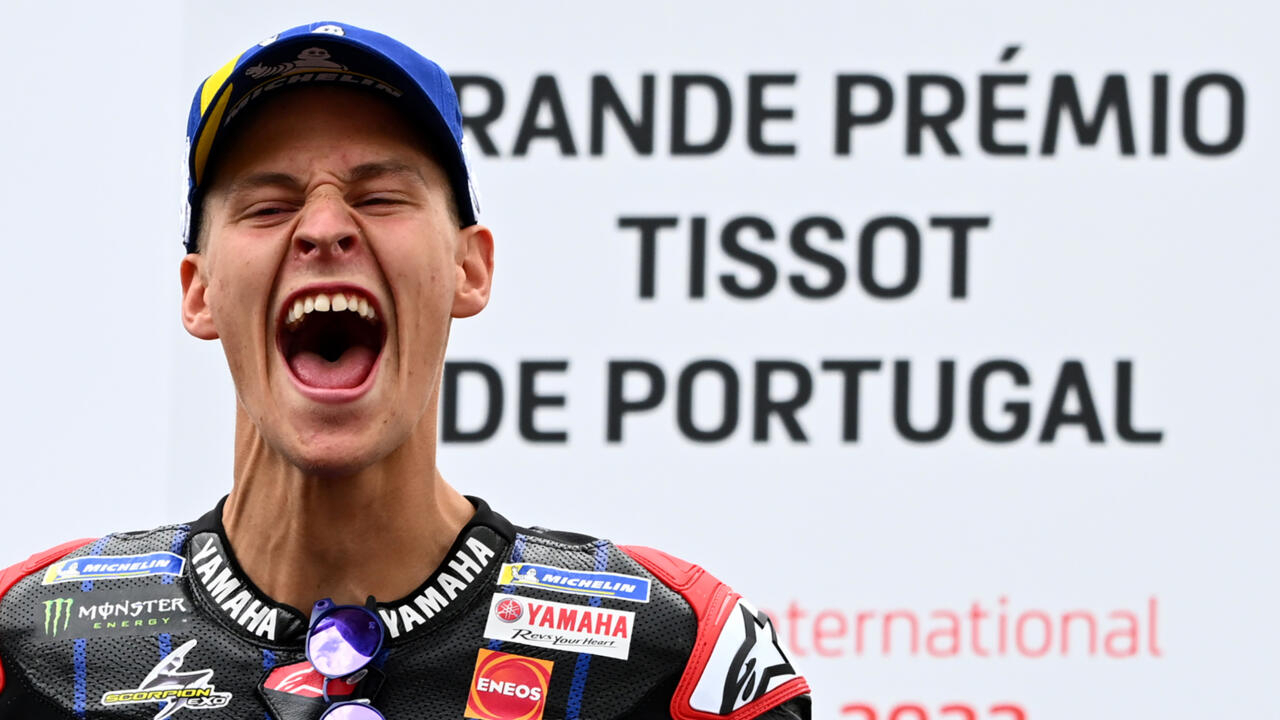 Quartararo dominated the race head and shoulders, finishing more than 5 seconds ahead of Zarco, who started from pole position.

The latter took advantage of the clash between the Spaniard Joan Mir (Suzuki) and the Australian Jack Miller (Ducati) while the three drivers were fighting for 2nd place.

The joy of Frenchman Fabio Quartararo, winner of the MotoGP Grand Prix of Portugal, on April 24, 2022 at the Algare International Circuit in Portimao PATRICIA DE MELO MOREIRA AFP

The Spaniard Aleix Espargaro (Aprilia) finished 3rd and takes the same place in the provisional classification of the championship.

He now has 69 championship points after five races, like Rins.

"I pushed myself to the limit," said Fabio Quartararo.

"I had a great start and I'm happy to win for the first time this season," said the Frenchman.

Zarco said after the finish that he was "impressed" with Quartararo's dominance.

"It's a great French victory but unfortunately it's not mine," he said despite having never won a race in MotoGP.

Frenchman Fabio Quartararo celebrates his victory in the MotoGP Grand Prix of Portugal, applauded by his runner-up and compatriot Johann Zarco, on April 24, 2022 at the Algare International Circuit in Portimao PATRICIA DE MELO MOREIRA AFP

Quartararo and Zarco had already achieved a double in this order at the Doha Grand Prix a year ago.

Italian Enea Bastianini (Ducati-Gresini), who was at the top of the championship standings before the Portuguese GP, fell and is now in 4th place in the standings with 61 points, ahead of Johann Zarco (51).

It was Joan Mir who started in the lead but Quartararo quickly took his measure and overtook him on the 4th lap before steadily widening the gap.

Mir was then caught by Zarco and Miller, the latter hooking him after braking too late, the two men finishing without difficulty in the gravel trap.

Frenchman Fabio Quartararo, during the MotoGP Grand Prix of Portugal, on April 24, 2022 at the Algare International Circuit in Portimao GABRIEL BOUYS AFP

Zarco, however, had to deal in the final laps with the return of Aleix Espargaro but contained him until the finish line.

Rins, who started 23rd on the grid, for his part made a great start and a festival of overtaking which allowed him to finish at the foot of the podium.

Behind him, a fantastic fight pitted the two Marquez brothers, Marc and Alex, both on Hondas, who finished 5th and 6th respectively just ahead of the Italian Francesco Bagnaia (Ducati) well recovered from a heavy fall in practice which left him worth a trip to the hospital.

The next race is the Spanish GP on May 1.