Alejandro Albán: "It is good to make gender self-determination at an early age"

Alexander Alban. Granada, 1988 Writer and psychiatrist. In Only the brave (Círculo de Tiza) he recounts with as much honesty as literary quality his process of changing sex, his... 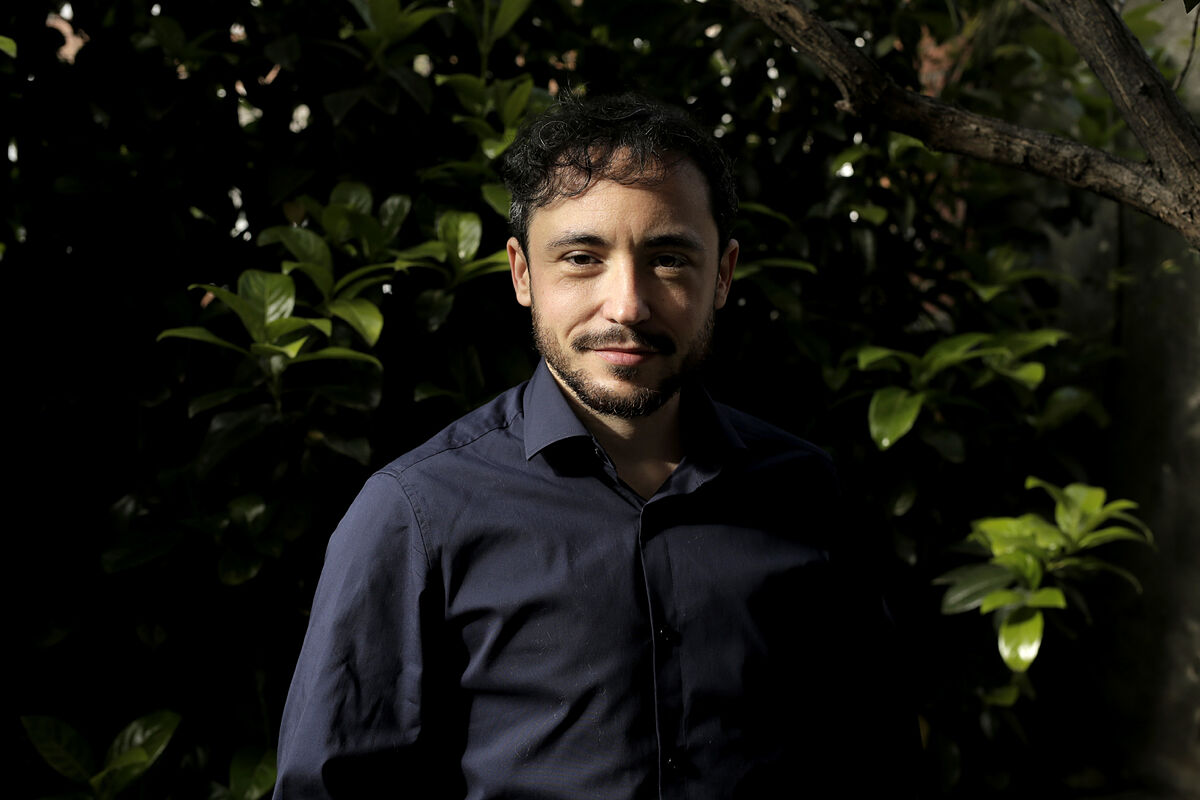 (Círculo de Tiza) he recounts with as much honesty as literary quality his process of changing his sex, his search for identity, his pain and his dignity.

His book, in which he narrates his process of changing his sex, is entitled "Only the brave".

I think it's not for me to say.

The title of the book can be misleading in that sense, because the complete quote on which it is inspired is "Only the brave cry", that is, it is a game between bravery and cowardice, strength and weakness, concepts that are also they are closely associated with the dichotomy between the masculine and the feminine and the stereotypes in this regard.

You grew up in rural Spain 30 years ago.

What was it like then to feel that the gender assigned to you by others and the one you felt did not coincide?

I don't know if the fact of growing up in a rural environment had an influence;

I guess so because in the villages the mentality is always somewhat more closed.

What I remember above all is the great silence that there was,

In his book he tells how, for example, it was very difficult for his father to accept that his daughter was actually a son, that you were transgender... It was difficult for me, as it happened and happens to many families.

But now things are very different.

My father, for example, now very much celebrates the publication of this book and the interviews they give me.

It is something that perhaps ten years ago would have seemed unthinkable to me, we have come a long way.

And that path has also been traveled by Spanish society in general, although there are still things to do.

What is there left to do?

Above all, there is a lack of visibility, a lack of freedom to be able to talk about these issues openly.

I know young people with anxiety and depression associated with their trans situation, and I see many differences between their families: some are more open, others more closed.

And what I see in these minors is the enormous good that having an understanding family does them.

You, when did you know how to put a name to what was happening to you, when were you fully aware that he was a man locked up in a girl's body?

The first feelings - which still did not have a precise name, which were not yet concentrated in the phrase "What happens to me is that I am trans" - merge with the first memories of my life.

I remember that feeling, when I was three or four years old, of being mistaken for a boy and feeling enormous joy.

But to name it, to tell me that what was happening to me was called being trans, it took me until I was 20 years old.

The draft of the Trans Law says that from the age of 14 you can decide the gender to which you belong.

I want to clarify that it is not about deciding, but about telling society what your gender is.

And it must be done without the need for a medical report or other paper, because one has the right to be believed and to adapt everything that has to be adapted so that their sexual identity is recognized.

It seems correct to me that gender self-determination is done at an early age.

Being able to carry out a transition early is, from a psychological point of view, something very beneficial for the person.

The General Council of the Judiciary recently underlined that in its opinion gender self-determination should be able to be carried out from the age of 16, because before that they consider that there is not enough maturity.

I respect, of course, any judicial decision.

But in my opinion I think that maturity does exist at 14 years of age.

I also have to clarify that I am not an expert in genre theory, I consider myself a writer.

Your book, is it a book for trans?

I believe that my book can be useful to people who are interested in the trans issue, because experience is very valuable.

But I think the book can also interest people who don't care about trans issues.

Because, despite the enormous weight that the trans issue has in our society,

Above all, what I have wanted is to write a good autobiographical novel.

Although I understand that it is a book that can be valuable for the current debate, I also want to claim that "Only the brave" is, above all, literature.

Why did you decide to study psychiatry?

There are people who believed that it was related to the fact of being trans, but for me it had nothing to do with it.

Simply, I chose medicine a little for the wrong reasons: perhaps for some vanity, for having good grades and not wanting to see them wasted.

I was quite disenchanted, because deep down I've always been in the humanities.

Psychiatry has been a way of correcting my mistake, because without a doubt it is the medical discipline that has the closest relationship with the humanities: with literature, with philosophy, with sociology, etc.

Are there still psychiatrists who do treatments to 'cure' homosexuality or transsexuality? I have been lucky enough not to know any.

I think sometimes there is a misconception about psychiatry;

It is a very heterogeneous discipline.

Of course, in public health I have never met any psychiatrist who does the barbarity that conversion therapy entails.

None of my colleagues is dedicated to that of course.

But there are many ways of looking at psychiatry.

But in his book he does talk about the bad experience he's had with a couple of psychiatrists from private health... Yes, but they didn't try to carry out any conversion therapy.

They just treated me coldly, something that is not right but of course has nothing to do with conversion therapies, which should be completely eradicated.

Writing this book, has it been a form of catharsis for you? I think that, secondarily, it has been beneficial for me to write it, it has helped me to put everything in its place, to order memories.

But of course I didn't write it with that intention;

to achieve a therapeutic effect I already have my psychoanalyst.

Perhaps I cannot say why I wrote this book.

But if I had to choose just one reason, I think I did it because it had a good story and all my life what I've wanted to do is write stories.

I needed to take that material and mold it as if it were clay, as Borges said, to create a narrative that I trusted could be good literature.

That's what mattered most to me.

There is a lot of talk about trans women.

especially by some feminist groups that refuse to consider them as women and leave them out of their struggle.

Yet so little is said about trans men like you, why?

Because we are an uncomfortable reality, because we do not fit into certain discourses and because it is a highly politicized issue.

I think we just don't fit into a certain political discourse. And would you like there to be more debate about trans men?

I wish there was no debate at all about trans people.

I think that some mistakes that are made are perhaps due to theorizing too much and putting theory before experience,

to not trust the personal experiences of trans people and to trust, however, in the theories of thinkers who may have contributed to raising aspects of gender that do not have to be an absolute truth.

At the moment in which trans women are excluded from the concept of women, that theory must be revisited because it is not correct.

I have always believed that no, I have always thought that I have been fortunate not to suffer from transphobia, and that is how I wrote it at the beginning in the book.

But a friend told me to remove it because it wasn't true, that in reality my whole life had been a transphobia but that I didn't realize that because I hadn't suffered direct attacks like those that other colleagues have unfortunately suffered.

But that fear, that insecurity,

not being able to freely say who you are and where you come from, that is also transphobia.

And I have been through that.

In fact, in the book he narrates quite crudely the depression he suffered... Yes. It also took years for me to give that depression a name, for me to realize that what I had gone through was depression.

A reactive depression, which many trans people go through.

The role of psychology and psychiatry is to help these people with those problems that may appear and that are partly caused by transphobia itself, by that inability that we still have as a society to talk about these issues openly.

One of the great problems of the trans community is the difficulty of finding a job.

I have had the privilege of not having to deal with that.

But there are many other trans people who suffer from unemployment, the statistics in this regard are devastating, especially among trans women.

Do you have any new literary projects underway?

First of all, I would like to publish the first novel I wrote, before "Only the brave", and which is entitled "No one returns".

It is a novel closer to my experience as a psychiatrist, in it I reflect on the parallelism between madness and the practice of psychiatry and the vulnerability of the figure of the doctor.

And do you have a new novel in mind?

Yes, I'm already working on it.

In this new novel, now far from autobiographical, I want to explore themes such as guilt and the consequences of childhood sexual abuse.

It will be a novel very focused on the therapeutic power of fiction.

What do you ask of life?

Right now, being able to write and find readers who are interested in what I write.