China News Service, April 22. According to the official WeChat news of the Ministry of Emergency Management on the 22nd, in order to crack down on lawbreakers by counterfeiting the emergency management department's government website and certificate information inquiry platform, manufacture and sell counterfeit special operation licenses, safety production knowledge and management. Ability asses 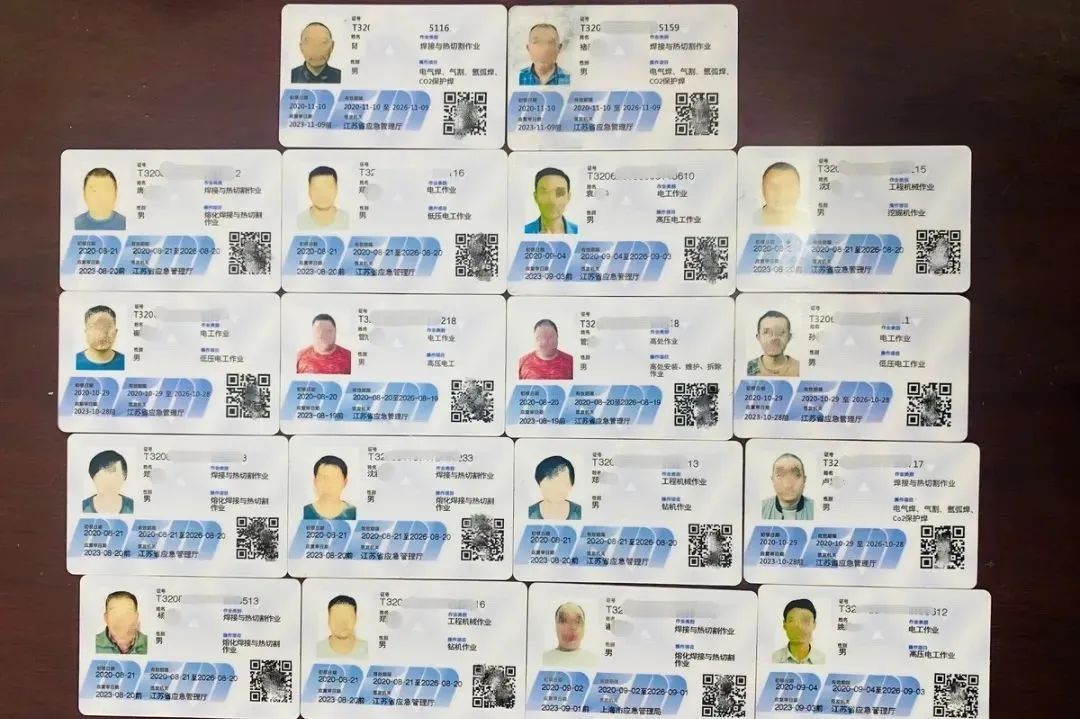 China News Service, April 22. According to the official WeChat news of the Ministry of Emergency Management on the 22nd, in order to crack down on lawbreakers by counterfeiting the emergency management department's government website and certificate information inquiry platform, manufacture and sell counterfeit special operation licenses, safety production knowledge and management. Ability assessment certificate and other illegal and criminal acts, effectively maintain the normal production safety order, and protect the legitimate rights and interests of enterprises and employees. From September 2021, the Ministry of Emergency Management and the Ministry of Public Security will organize a nationwide crackdown on counterfeit government websites. Production certificate special action.

In the six months since the launch of the special campaign, emergency management departments at all levels have investigated and dealt with 1,819 violations of undocumented employment, 532 violations with false licenses, and administrative penalties of more than 25.69 million yuan.

It is understood that, in recent years, a small number of lawbreakers, driven by interests, ignore the law, and disregard the safety of people's lives and property, fake emergency management departments' government websites and certificate information inquiry platforms, and forge, alter, and trade counterfeit special operation certificates and Safety production knowledge and management ability assessment certificate, resulting in personnel who do not have basic safety skills to engage in high-risk operations or management activities, burying major hidden dangers in the production and operation activities of enterprises, seriously disrupting the normal safety production order, and infringing upon the legitimate rights and interests of enterprises and employees , damage the image of the party and the government.

The Ministry of Emergency Management and the Ministry of Public Security have discussed and researched on a special topic, and deployed a joint special campaign to crack down on the production and sale of counterfeit work safety certificates on counterfeit government websites.

At the same time, the illegal acts of production and business units that do not seriously verify the authenticity of the safety production certificate and acquiesce in the employment of employees with false certificates shall be investigated and dealt with in accordance with the law.

Since the launch of the special operation, emergency management departments and public security organs at all levels have taken the initiative to attack and cooperate with each other in accordance with their work arrangements, and have focused on investigating and handling a number of typical cases, effectively cracking down on the arrogance of criminals.

For example: Zhangjiagang City Emergency Management Bureau of Jiangsu Province, together with the Public Security Bureau, through the use of counterfeit and forged special operation license cases, followed the clues and destroyed a cross-provincial criminal gang forging and selling fake licenses, arrested 50 criminal suspects, and closed more than 10 illegal websites. ; The Internet Security Detachment of Changzhou City Public Security Bureau, Jiangsu Province, based on the clues about the advertisement of national qualification certificates published on a certain website, destroyed an inter-provincial criminal gang forging and selling fake certificates, arrested 111 criminal suspects, and seized the special operation licenses that had been sold. More than 20,000 fake certificates of various types, and 11 national government websites such as the Ministry of Emergency Management and the Ministry of Housing and Urban-Rural Development were closed; the emergency management department of Zhejiang Province, together with the public security organs, seized a case of cheating in the examination of special work permits by scientific and technological means, and arrested 12 persons involved in the case. name.

The gang assisted more than 300 candidates to cheat in the exam by illegally remotely controlling the computer information system of the examination room, and made an illegal profit of 270,000 yuan.

At the same time, research and establish a normalized anti-counterfeiting work mechanism, effectively curb the harm of false certificates, and safeguard the safety of people's lives and property.

The Zhangjiagang City Emergency Management Bureau of Jiangsu Province, together with the Public Security Bureau, locked down a criminal gang headed by Yang who forged and traded state agency documents through the use of counterfeit and forged special operation licenses.

Subsequently, the police went to Hunan, Shandong, Hebei, Tianjin, Shaanxi and other places to carry out pursuit and successfully destroyed the criminal gang.

A total of 50 criminal suspects were arrested, more than 10 illegal websites were closed, and the amount involved was more than 10 million yuan.

After review, in June 2020, the suspect Yang found a friend from his hometown, Tan, and others to plan a business with fake certificates, promote certificate application advertisements on the Internet, and recruit relatives and friends as salesmen.

In order to make the fake certificate as realistic as possible, Yang recruited a special person to set up a server, imitated the website of the emergency management department, and associated the information of the person who purchased the certificate with a QR code, so that the corresponding information can be displayed on the “shanzhai” webpage by scanning the code.

After the gang headed by Yang received part of the deposit from the person who purchased the certificate, they made a fake certificate and sent it by express.

According to the clues of the problem of advertising advertisements for national qualification certificates published on a website, the Internet Security Detachment of Changzhou City Public Security Bureau of Jiangsu Province, together with the Zhonglou Branch, set up a special task force, and successively went to Guangdong, Guangxi, Liaoning, Hunan, Jiangxi, Jiangsu and other places to carry out in-depth investigations and succeeded. 111 criminal suspects were apprehended, including 5 gangs who produced fake certificates, 1 suspect who produced and maintained counterfeit websites, and 105 people who engaged in the sale and sale of fake certificates, removed a source den of producing and selling fake certificates, and seized 2 certificate-producing printers More than 100 mobile phones and computers were involved in the case, more than 20,000 fake certificates were seized, and 11 national government websites such as the Ministry of Emergency Management and the Ministry of Housing and Urban-Rural Development were destroyed.

Since 2020, Luo and others have sold various types of special operation licenses through websites, e-commerce and other channels, and have built a platform including "The Whole Network Special Operation Certificate Filing Evaluation and Inquiry Platform (Emergency Administration)" and "Emergency Management in Tongcheng, Anhui Province". The fake website of the emergency management department, such as the Bureau” and the official website of the Changning Emergency Management Bureau of Hunan Province, provides verification and inquiry of false certificates, and the funds involved in the case are more than 5 million yuan.

An invigilator at a test site in Shaoxing City, Zhejiang Province found that there was an abnormal situation of "automatic" answering on the computer screen of a candidate during a special assignment theory test, so he promptly reported it to the supervisory department and closed the test room.

Subsequently, an administrative penalty of 15,000 yuan was imposed on the examination site involved, the examination qualification was cancelled, and the clues about the problem were transferred to the public security organ for investigation.

After investigation by the public security organs, it was found that the gang headed by Wei, under the guise of a training institution, promised to “pass” the special assignment exam to recruit students, and actually took advantage of the loopholes in the computer in the exam room to connect to the Internet, and privately installed a remote control computer information system on the computer in the exam room. The software organizes the "gunners" outside the examination room to cheat for the candidates by answering the questions through the remote control system.

After verification, Wei and other 12 people organized more than 300 candidates to cheat by illegally remotely controlling the computer information system of the examination room in 3 special operation theory exams, and the illegal profits totaled about 270,000 yuan.