Today, Friday, the Israeli occupation soldiers invaded the Al-Aqsa Mosque buildings, and shot the worshipers and the stationed ones. At a time when the President of the Palestinian Authority threatens to take an escalating step against Tel Aviv, tension is hanging over Gaza. 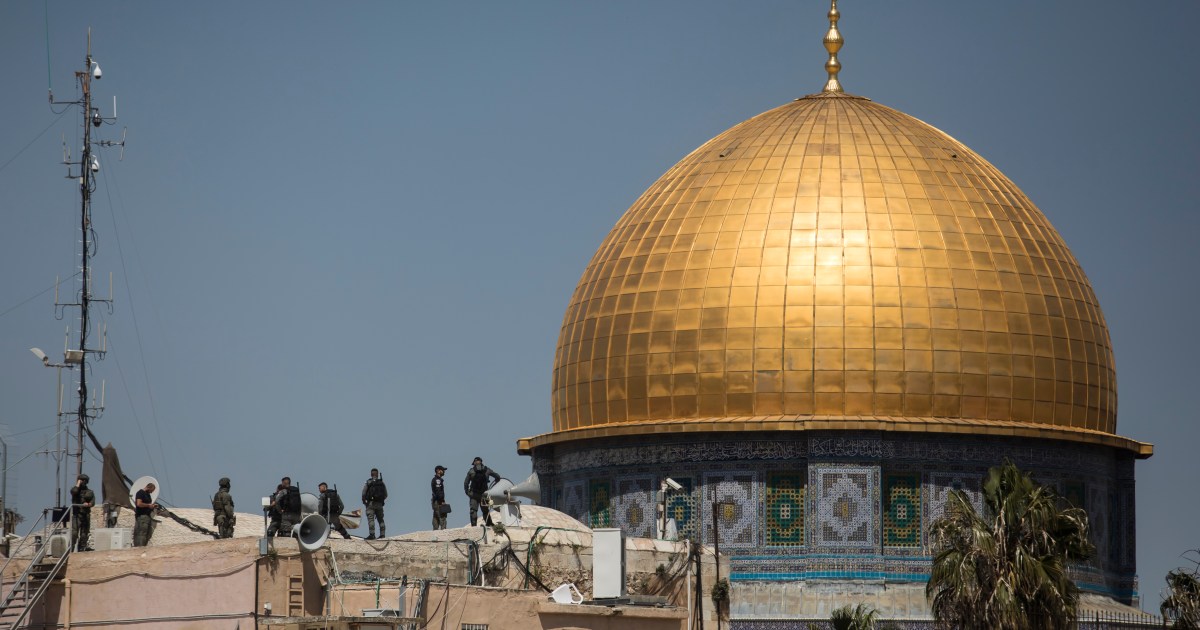 Today, Friday, the occupation soldiers occupied the buildings of Al-Aqsa Mosque, and shot the worshipers and those who stationed.

At a time when Palestinian Authority President Mahmoud Abbas threatens to take an escalatory step against Israel, tension hangs over Gaza as the occupation mobilizes its forces and affirmed its readiness for a new military operation against the Strip.

Israeli forces rose on the roofs of Al-Aqsa Mosque buildings this morning, and fired rubber bullets at those inside the courtyards of the Noble Mosque.

New clashes erupted between the occupation police and Palestinian demonstrators, this morning, in the courtyard of Al-Aqsa Mosque, which resulted in dozens of injuries.

Al-Jazeera correspondent from Jerusalem, Najwan Samri, said that about 40 Palestinians, including 3 journalists, were shot by the occupation forces, which stormed the courtyards of Al-Aqsa.

This is the sixth time in a row that Israeli forces have stormed the blessed Al-Aqsa Mosque, attacking worshipers and worshipers.

Meanwhile, the correspondent reported that thousands of people flock to Al-Aqsa Mosque through Bab Al-Amoud to perform Friday prayers.

The correspondent added that the occupation forces prevent Palestinians from reaching Al-Aqsa Mosque.

The Israeli police have decided to raise the state of alert and prepare for the possibility of a large-scale escalation in Al-Aqsa Mosque, coinciding with the third Friday prayer of Ramadan.

A call and a warning

For his part, the President of the Palestinian Authority called on the US administration to intervene urgently in order to immediately stop the escalatory Israeli measures in the Palestinian territories.

During his meeting with an American delegation in Ramallah, Abbas held the occupation responsible for the escalation and the absence of what he described as a political horizon. He also warned that the continuation of the Israeli escalation would force the Palestinian leadership to implement the decisions of the Central Council of the Liberation Organization to withdraw recognition of Israel and stop all forms of coordination with it.

For its part, Hamas called on the Palestinian people to mobilize and mobilize in defense of Jerusalem and Al-Aqsa Mosque, stressing that the battle with the occupation is still continuing.

In turn, the head of the Islamic movement inside the Green Line, Sheikh Raed Salah, said that the occupation is the only cause of the events taking place in Al-Aqsa Mosque.

He added - in an intervention with Al-Jazeera - that Al-Aqsa Mosque is occupied according to international law and Islamic constants, and that all of Israel's measures and incursions by its forces do not prove to it a right to the blessed Al-Aqsa.

The Temple Mount has been witnessing great tension for a week, as the occupation police and settlers continued to storm the Al-Aqsa Mosque on the occasion of the Jewish celebrations of what they call Easter, which ended on Thursday evening.

During the past week, more than 200 people, most of them Palestinians, were injured in confrontations with the occupation police in and around the Temple Mount.

Yesterday, a number of Arab ministers, at a meeting in the Jordanian capital, condemned "the Israeli attacks and violations against worshipers in the blessed Al-Aqsa Mosque."

In the same context, the Chief of Staff of the Israeli army, Aviv Kohavi, instructed the commander of the Southern Command to prepare for any possible escalation on the border with the Gaza Strip, and the possibility of launching a military operation against it in the event of continued rocket fire towards the adjacent towns and settlements, or any other operations against Israeli targets in what is known as the area Gaza cover.

The Palestinian resistance factions fired rockets from Gaza on Thursday night at Israel, which responded with retaliatory strikes on the Strip, which raises fears of a new military escalation between Hamas and the occupation army against the backdrop of tension related to the holy sites in occupied East Jerusalem.

The Israeli army said that 6 missiles were fired from the Gaza Strip towards it, which is the largest since the 11-day war between it and Hamas in May 2021, after weeks of tension in the occupied holy city.

Earlier, the Palestinian factions confirmed their adherence to the option of armed struggle and their readiness to respond to the Israeli aggression.