The bar is closed but the morning is a non stop picking up orders. We catch Alberto just arrived from New York when it is May 10th anniversary of 1862 Dry Bar, his... 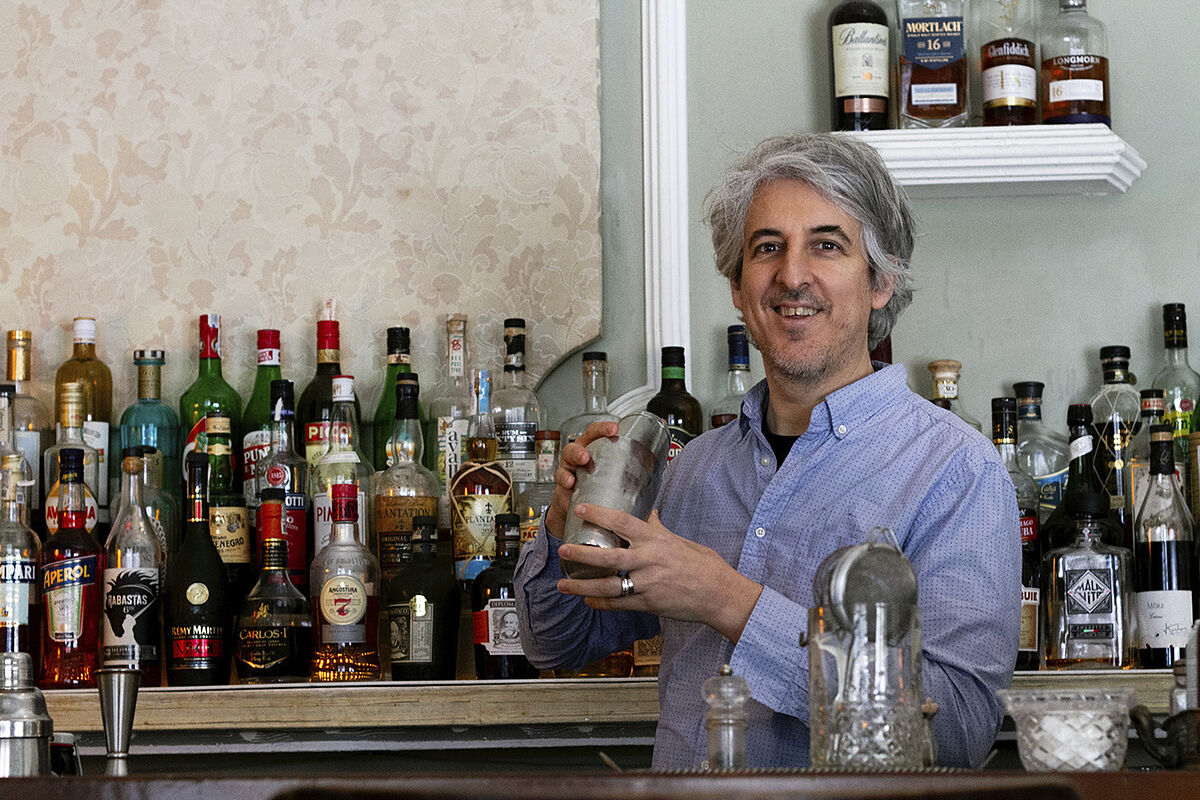 The bar is closed but the morning is a non stop picking up orders.

, his store on Pez Street, and 160 from the building where it is located.

As fate would have it, it was built a century and a half ago, the same year that

, the father of cocktails, was published.

The old book, guarded in the showcase, and that founding 1862, mark this history.

(Madrid, 48 years old) was an engineer who the previous crisis and an accident left him out of the game.

He had never worked in a bar, but

that he shared with the Lüger musicians.

background until the new Alberto went on to sell gins and vodkas at Adam & Van Eekelen, a store that ended up getting complicated.

It was when an entire generation learned to drink gin and

on this street: "Large glass, flavored and without excesses".

"There were still Palentinos, traditional bars," he remembers nostalgically.

"Although the Cafeína, the Abalú hotel, Casa del Pez were already there... The

and tonic didn't fill me up. More than the cocktails, I like its romantic history of the 19th century in the United States, which gives me the ability to make

The poetic part of cocktails

And Alberto crossed the street where an empty shop awaited him.

"I started with Adam, but being partners didn't work out. The timing was perfect. In Madrid there were Del Diego, Chicote and Cock, but also Diego (Cabrera) at Le Cabrera and Carlos (Moreno) at O'Clock. The cocktail bar was already

he decorated his bar emulating those New York hotels

Chandeliers, large mirrors (the one that presides over the bar is made of plaster but it looks amazing), the cage on the ground floor... "

. Let it be elegant but not impose. My favorite bar is Del Diego but if I put waiters with bow ties it would scare the customer. It had to be a bar for all audiences".

Not that much has changed either.

Perhaps the fullest bottle rack and some

He knows a lot of people, his bonhomie is indisputable:

"I love leaning on someone who knows more than me"

That is why all the bartenders in Spain have been guests at his bar, he organizes aperitif events (even Adolfo Santos de Saddle has cooked tripe here), or strengthens his team of seven people with young people (Ana Diez is the youngest with 26 years) and veterans like Ángel San José (57 years old), "the only barman left with one foot before and one now".

Alberto's generosity allows him to take the bike and

deliver cocktails in hand during confinement

or mentor new talents, such as Marrufo, on the other side of San Bernardo.

"The cocktail bar needs a route, you see it on Aribau street in Barcelona.

I'm sorry that Malasaña has been left without anything interesting

Although he is partly responsible for also opening Santos and Desamparados in the neighborhood of Las Letras.

"Here there is a lot of toast but nothing of the author, a Javi Goya is missing that attracts".

While it waits for the cosmopolitan tourist to return, the true daily cocktail customer, it continues to fill up on reservations on weekends.

"There has been a brutal change thanks to the Larrumba group.

I can only educate a few

And it was already anticipated that the bar would be seated, more gastronomic and daytime.

His job is not to lose the essence, to occupy the void of the pioneers: "

and the cocktail bar is daytime. When they named me the best bar in Spain it was because there was no other. Del Diego was out contest, just like me now no one is going to vote for me".

It is not entirely true.

After a decade of life,

"I didn't expect it. It's a joy and it will bring us an audience."

What a journey since it

Now the classics on the menu are not so obvious (Paper Plane, Rome With a View, Chilcano...) while interest in the signature section is growing, such as the Prescription that he prepares for us, a

it continues without machinery, without fermenting, without giving in to fashion

He prefers to pull a VORS amontillado.

"It has a history, it's ours. The Sherry Cobbler was the best-selling cocktail in the United States, the one that was drunk at the universal exhibitions. How cool was that time. The bar is called 1862 Dry for a reason, it still defines

Word of the last romantic.

in the world have passed through its bar

, and it also organizes exhibitions.

- Gimlet, Daiquiri or Espresso Martini no longer appear on the menu, although they are still

- Your line is not to clarify or look for modern flavors.