The number of infected people in mainland China has dropped to less than 20,000. Beijing continues to strictly manage entry and return to Beijing

(Fighting against New Coronary Pneumonia) The number of local infections in mainland China has dropped to below 20,000. Beijing continues to strictly manage entry and return to Beijing   China News Agency, Beijing, April 20. Comprehensive news: China's National Health and Medical Commission announced on the 20th that there were 2,761 new confirmed cases in mainland China on the 19th, including 8 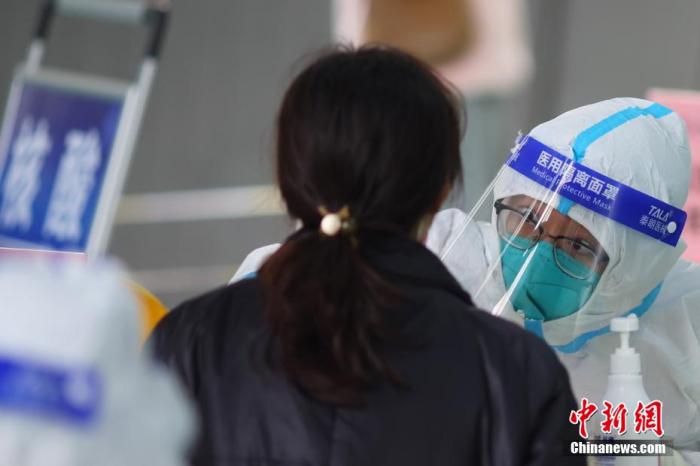 (Fighting against New Coronary Pneumonia) The number of local infections in mainland China has dropped to below 20,000. Beijing continues to strictly manage entry and return to Beijing

China News Agency, Beijing, April 20. Comprehensive news: China's National Health and Medical Commission announced on the 20th that there were 2,761 new confirmed cases in mainland China on the 19th, including 8 imported cases and 2,753 local cases.

Local infections in mainland China fell below 20,000, 17 deaths reported in the past three days

On the 19th, there were 19,819 new cases of local infections (confirmed + asymptomatic) in mainland China, which dropped below 20,000 for the first time since April 5.

The cases are distributed in 15 provinces, with 2494 cases in Shanghai accounting for more than 90%.

This was followed by 133 cases in Jilin, 45 in Heilongjiang, 25 in Jiangxi, 14 in Guangdong, and 10 provinces with single-digit additions.

There were 17,066 new cases of local asymptomatic infections that day, less than 20,000 for two consecutive days and the lowest in nearly half a month.

On the 19th, there were 7 new deaths in mainland China, all of which were reported in Shanghai.

According to the official introduction, of the 7 deaths, 2 were under the age of 60, combined with advanced lung cancer, pleural effusion, and acute coronary syndrome.

Two of them have been vaccinated against the new crown.

The above-mentioned 7 people's condition worsened after admission, and they died after the rescue failed. The direct cause of death was all caused by the underlying disease.

From the 17th to the 19th, mainland China reported 17 deaths for three consecutive days, all in Shanghai.

The epidemic situation in Shanghai is on the decline, and Beijing continues to strictly manage entry and return to Beijing

The Shanghai Municipal Health Commission stated on the 20th that the epidemic situation in Shanghai has been on a downward trend in recent days. The number of new cases reported in a single day in the streets and towns has decreased for three consecutive days, and the spread of the community has been effectively curbed. Social cleanup goals.

In addition, the number of people discharged from hospitals and cabins (fangcang shelter hospitals) in Shanghai continued to increase, reaching 27,093 cases on the 19th, far exceeding the number of new local infections that day.

Among them, 16,650 closed and controlled areas were designated, involving 11.878 million people, a decrease of more than 4 million people compared with the first delineation before, and the populations involved in the control and prevention areas increased by more than 2 million people each.

From 0:00 on April 19th to 16:00 on the 20th, 3 new local confirmed cases were confirmed in Beijing. Among them, 2 cases in Haidian District were close contacts of previously reported infected persons, and 1 case in Tongzhou was a person who entered Beijing by car from another province.

Beijing officials said that the "May Day" holiday is approaching, and Beijing will strictly control liquidity and aggregation risks.

Continue to strictly manage entry and return to Beijing, and do not leave Beijing unless necessary.

Persons entering and returning to Beijing must report to the community (village), unit, hotel, etc. where they live before or within 12 hours after arriving in Beijing. If the risk of epidemic prevention and control is caused by concealment, false reporting, or late reporting, they will be held accountable according to law.

Parts of Guangzhou have become normalized to prevent and control the 6 outbreaks in Hangzhou, the source of which is still unknown

According to the Guangzhou Municipal Health and Health Commission, as of 15:00 on the 20th, no infected person has been found in the city's society for 4 consecutive days.

According to the recent epidemic situation, according to experts' research and judgment, some areas have lifted the "three districts" control measures and turned to normal prevention and control.

At the same time, in light of the adjustment of the "three districts", relevant public transportation will be resumed from 15:00 on the 20th.

Hangzhou officials said on the 20th that the epidemic in Hangzhou was mainly imported from other places. Since March, a total of 57 independent epidemics have been reported in the city, of which 40 were caused by imports from other provinces and cities, accounting for more than 70%.

Some of the outbreaks of unknown origin showed a trend of multiple outbreaks, and the source of 6 outbreaks in the city is still being traced.

Since the outbreak of the local epidemic on April 17, the number of infected people in Tangshan City, Hebei Province has surged in the past two days, and a total of 76 local infections have been reported within two days (2 confirmed and 74 asymptomatic; 29 reported on the 18th, 19 Daily reported 47 cases), mainly in Qian'an and Luanzhou.

The Hebei Provincial Center for Disease Control and Prevention revealed on the 20th that the virus strain of the outbreak in Tangshan City was Omicron BA.

The first case in Qian'an City was discovered by a villager in the city after seeking medical attention on the 17th, and was later diagnosed as a confirmed case.

At present, Tangshan City has implemented a global temporary closure and control management.

Dehong Prefecture, Yunnan Province reported on the 20th that Ruili City, Mang City, Longchuan County and Yingjiang County in the prefecture have had no new community cases for more than 14 consecutive days, and this round of epidemic situation has been fully dynamically cleared.

At a time when the global epidemic remains high, Dehong Prefecture, located on the China-Myanmar border, has been repeatedly hit by the epidemic. Last winter and this spring, Ruili, Longchuan and other places were hit hardest by the epidemic.

According to statistics, since February 16, a total of 547 cases of positive infection have been treated in Dehong Prefecture, with no deaths or overflows.