(Endeavouring for a new journey and making contributions to a new era and a new look for the old district) Played the song of endeavour, and the old district of southern Gansu comprehensively promoted rural revitalization (picture)   China News Service, Jiangxi, Ganzhou, April 20th: Playing the song of forging ahead, the old area of ​​southern Ganzhou comprehensively promotes rural revitalization 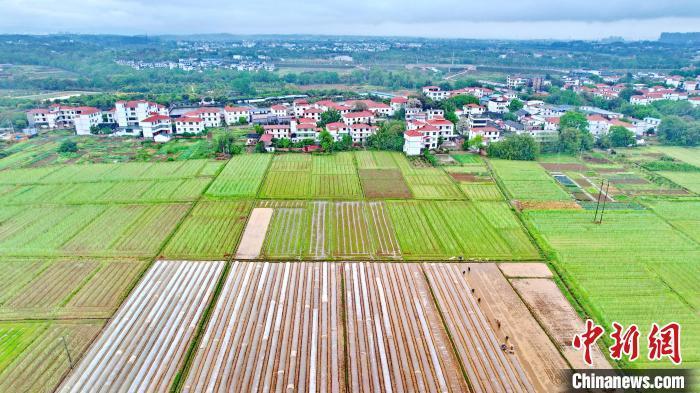 (Endeavouring for a new journey and making contributions to a new era and a new look for the old district) Played the song of endeavour, and the old district of southern Gansu comprehensively promoted rural revitalization (picture)

"I moved from an adobe house in the mountains to a hut in the city, and rented a 50-square-meter storefront to do business." Li Qin learned cooking skills through free training. He is currently running a snack shop in Siyuan Community, Xingguo County, Ganzhou City, Jiangxi Province The shop has changed from a "worker" to a "shop boy".

Li Qin's transformation is due to the innovative implementation of the "point-length system" for poverty alleviation and relocation in Xingguo County.

The picture shows an aerial photo of a village in Ganzhou, Jiangxi Province in early spring, where villagers are busy farming in the fields.

Xingguo County's innovative implementation of the "point and long system" for relocation is a microcosm of Jiangxi Ganzhou's comprehensive promotion of rural revitalization.

Ganzhou in Jiangxi is the core area of ​​the former Central Soviet Area, and it was once one of the largest concentrated contiguous destitute areas in China.

In 2012, with the promulgation of the "Several Opinions of the State Council on Supporting the Revitalization and Development of the Former Central Soviet Areas in Gannan", the old areas in southern Gansu entered a period of fastest economic and social development, the greatest changes in urban and rural appearances, and the most benefit to the people.

The picture shows the Dongfeng Lake Reservoir at the source of the Dongjiang River in Anyuan County, Ganzhou City, Jiangxi Province, on April 14.

As a famous old revolutionary base area, Ganzhou in Jiangxi Province, together with the whole country, has won a comprehensive victory in poverty alleviation with high quality as scheduled, and 1.1433 million poor people have been lifted out of poverty.

In order to consolidate and expand the achievements of poverty alleviation, Ganzhou, Jiangxi has implemented the five-year transition period and the "four no-picks" requirements for poverty alleviation, maintained the overall stability of the existing main assistance policies, improved the dynamic monitoring and assistance mechanism to prevent the return to poverty, and provided assistance to the people who are prone to return to poverty. Timely detection, timely assistance, and resolutely hold the bottom line of not returning to poverty on a large scale.

Industry is the economic foundation of rural revitalization.

The owners of the garden, Xiao Zuhong and Tian Dinghua, stocked native chickens under the navel orange tree, and found a way to become rich in selenium-enriched ecological agriculture.

Xiao Zuhong said that the green grass and natural bugs not only reduce the cost of feeding, but also improve the quality of chicken and eggs.

The important thing is that the unique selenium soil in southern Gansu brings the addition of selenium to the chickens that eat selenium-rich grass and insects, and the chickens and eggs in the garden can reach selenium-enriched quality.

In an orchard in Xinfeng County, Ganzhou City, Jiangxi Province, a fruit farmer was introducing the fresh navel oranges he had just picked to tourists when a Ganshen high-speed train passed by.

In addition to consolidating and expanding the achievements of poverty alleviation and accelerating the development of modern agriculture, Ganzhou, Jiangxi has also steadily promoted rural construction.

During the Grain Rain season, walking in the countryside of southern Gansu, with wide and flat roads, scattered houses, green waves in the fields, the villagers are striding towards a new journey.