“The militants are preparing for a very long activity”: how the Russian military is fighting Ukrainian saboteurs

Russian servicemen and units of the republics of Donbass continue to search for and detain Ukrainian saboteurs in the zone of the special operation. The other day, a woman was detained in Melitopol, who handed over to the Armed Forces of Ukraine data on the location of the positions of the RF Armed Forces, and in Kherson, the military found several caches of weapons and ammunition. Experts emphasize that Ukrainian militants plan to carry out sabotage activities in the liberated territories after the end of the special operation. 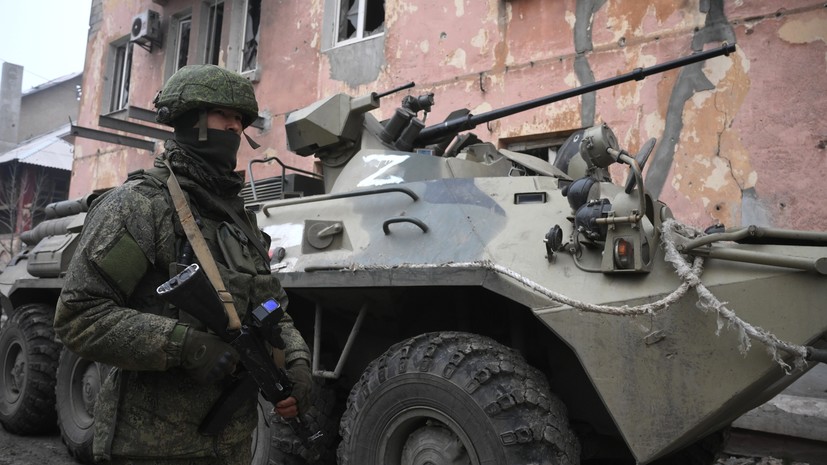 On April 19, it became known about the detention of spotter Natalia Nazarenko in Melitopol, who handed over to the Armed Forces of Ukraine a video of the unloading of ammunition by the Russian military.

A blow was struck at the indicated location, during which people were injured.

A video of the interrogation of the woman appeared in the media - in the video, she explains that she sent information about the location of Russian forces to her military partner.

“I took a video from the window of the apartment that they were unloading ammunition, and I passed this data on to my roommate, brother and son.

The cohabitant told me to delete this video from the phone after that,” the detainee said.

“He has been in the army since February 23 ... On October 9, 2019, he signed a contract, first he served here at the airfield, then they were disbanded and sent to Melitopol.”

Member of the Council on Foreign and Defense Policy, retired Major General of the FSB Alexander Mikhailov, in an interview with RT, noted that civilians caught transmitting intelligence to the Armed Forces of Ukraine are not prisoners of war.

He also stated that the question of the possibility of bringing these citizens to any responsibility is debatable, since they are detained on the territory of Ukraine.

“We are constantly faced with such things as the transmission of data by civilians about the location of Russian troops of the Armed Forces of Ukraine.

Today's means of communication allow not only to shoot and transfer photos and videos, but also to send coordinates, geolocation of certain objects.

Sometimes this makes it very difficult to conduct a military operation, - said the interlocutor of RT.

- I believe that some measures will be taken against civilians who transmit data about Russian troops to the Ukrainian side, but if we talk about legal aspects, then a person who commits a crime should be punished according to the laws of the country in which he commits a crime.

So it's a difficult moment."

An important direction in the struggle of units of the Russian Federation and the republics of Donbass with Ukrainian saboteurs remains the identification of their checkpoints, caches of weapons and provisions.

So, on April 20, a Ukrainian territorial defense headquarters was discovered in Kherson, which was located in a local school.

According to the agency, the institution was used as a stronghold: the basements were filled with boxes of weapons and ammunition, as well as medicines and military equipment.

The principal of the school told the Russian military how Ukrainian militants had taken over the building.

They quickly began to settle into classes, began to bring in some boxes, ”the woman explained, adding that she herself was expelled from school, threatening with reprisals.

The Russian military, who discovered the headquarters, took out all weapons and ammunition from there, and then handed over the building of the school to the administration of Kherson.

Mass raids of the RF Armed Forces in the city began a day earlier, the reason for the intensification of the search was the discovery of a cache with weapons and explosives in the building of the Kherson military plant "Pallada" on April 19.

On the same day, a cache of Ukrainian saboteurs was also found in the village of Tsupovka in the Kharkov region - employees of the LPR Ministry of Internal Affairs discovered a weapons warehouse in an abandoned house.

The department reported that thanks to this find, it was possible to prevent the sabotage of the Ukrainian side, aimed at discrediting the Russian Armed Forces.

Information about the hiding place of saboteurs in Tsupovka was received by the Ministry of Internal Affairs of the LPR from the local population.

A military uniform with Russian insignia, Molotov cocktails and weapons were found in the said house.

“The nature of the contents in the discovered cache reasonably indicates a systematic and thorough preparation, with options for withdrawal, sabotage in order to discredit the military personnel of the Russian Federation,” representatives of the LPR Ministry of Internal Affairs emphasized in an official report on the results of searches in Tsupovka.

Alexander Mikhailov believes that the facts of the discovery of militant caches indicate that they have long-term plans to carry out sabotage activities in the liberated territories of the LPR and DPR.

“The militants are preparing for a very long sabotage activity after the end of the special operation.

Therefore, today we have a large number of various caches, caches with weapons and food, fuel, and so on,” Mikhailov stated.

The authorities of the republics of Donbass regularly remind citizens of the need to be vigilant in connection with the increase in the number of Ukrainian saboteurs in the territories left by the Armed Forces of Ukraine.

Civilians are asked to report all suspicious persons appearing in settlements - the authorities send out a corresponding memo to citizens.

Residents of the DPR are asked, for example, to pay special attention to people who move into empty houses, have poor orientation in the area or move in small groups at night, as well as people who avoid talking to locals or voice unusual questions and requests.

Thus, the attempts of Ukrainian militants to leave the blocked Mariupol were repeatedly suppressed.

Earlier, in an interview with RT, the former head of the department of the High Command of the Internal Troops of the Ministry of Internal Affairs of Russia, retired colonel Alexander Denisov, spoke about the signs by which the militants of the National Battalions are calculated.

“It is clear that, first of all, attention is drawn to men who are able to hold weapons in their hands.

During the initial examination, doctors are also present at the checkpoint.

For example, a bruise on the shoulder is a sign of the recoil of a weapon during active shooting, ”explained the interlocutor of RT.

Denisov emphasized that members of the national battalions who manage to penetrate the liberated territories are guaranteed to carry out sabotage activities there.

“Therefore, the main thing today is the elimination of terrorist groups and work with the population,” the expert summed up.