"Defeat in the border zone": why Turkey launched a new military operation against Kurdish formations in Iraq

On the night of April 18, Ankara initiated a new military operation against militants of the Kurdistan Workers' Party, according to the Turkish Defense Ministry. This campaign is being actively supported by aviation in northern Iraq. Powerful airstrikes were inflicted on the PKK facilities, the areas of the probable location of the Kurdish formations were also fired from large-caliber artillery. In addition, Turkish special forces groups landed on Iraqi territory, supported by ATAK attack helicopters and UAVs. According to Ankara, 19 members of the PKK have already been eliminated. At the same time, four Turkish soldiers were wounded. According to experts, the goal of Ankara's current operation is to "defeat the PKK bases in the border zone" and drive the militants away from the border with Turkey. 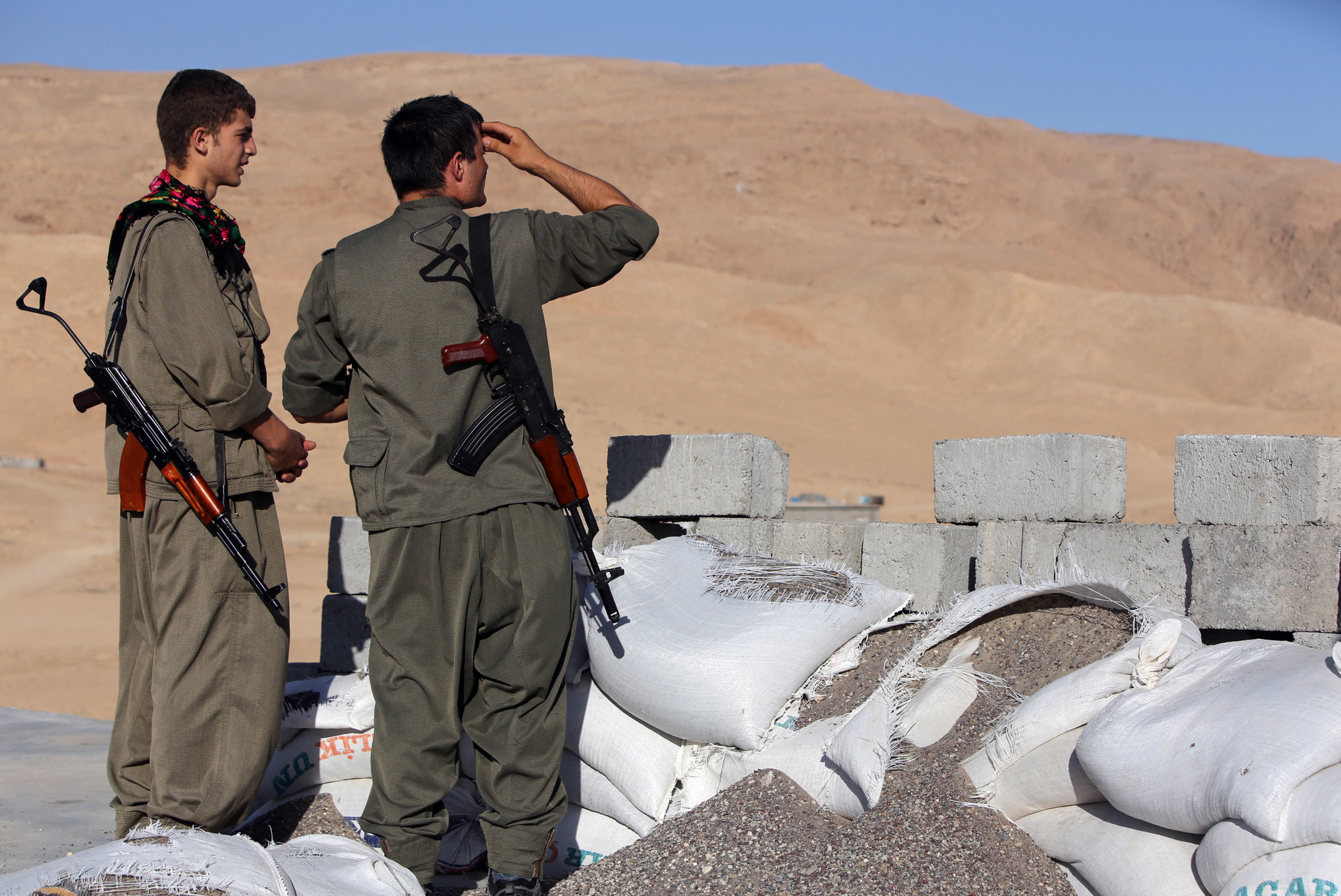 On the night of April 18, Turkey launched a new military operation in Iraq against militants of the Kurdistan Workers' Party (PKK), which is recognized by Ankara as a terrorist organization.

This is reported by the Turkish Ministry of Defense.

The special operation is being carried out with the active support of aviation in three northern regions of Iraq: Metina, Zap and Avashin-Basyan, Turkish Defense Minister Hulusi Akar said.

“Turkey has been fighting the threat of terrorism for 40 years.

We respect the territorial integrity and sovereignty of friendly and fraternal Iraq.

Our only goal is the terrorists who threaten the borders of Turkey, ”Anadolu agency quoted the head of the Turkish Ministry of Defense as saying.

At the same time, all steps are being taken to eliminate damage to the civilian population, as well as religious and cultural sites in Iraq, Akar said.

The Minister of Defense said that within the framework of the first stage of the special operation in the north of Iraq, Ankara achieved all the tasks set.

“The operation continues successfully and in accordance with the plans.

As part of the first stage, control over all planned goals was ensured,” Akar emphasized.

According to his statement, powerful airstrikes were inflicted on the PKK facilities, the areas of the likely location of the Kurdish formations were also fired from large-caliber artillery.

According to the Minister of Defense, Turkey will continue the special operation until the last militant is eliminated.

According to Ankara, 19 members of the PKK have already been killed.

At the same time, four Turkish soldiers were wounded.

Earlier, Turkish President Recep Tayyip Erdogan said that since 1984, when the PKK first carried out a terrorist attack in Turkey, thousands of members of the republic's security forces, military and civilians have died at the hands of this organization.

Recall that the current special operation in Iraq is far from the first such military campaign of Turkey in this country against Kurdish formations.

So, in 2020, the Turkish Ministry of Defense reported that it had destroyed about 150 PKK facilities with the support of Storm self-propelled artillery mounts and anti-aircraft missile systems during Operation Tiger Claw.

Earlier that year, Operation Eagle's Claw was also carried out on Iraqi territory.

The Turkish Defense Ministry noted that this campaign was a reaction to the activation of PKK militants who tried to strike at Turkish police stations and areas of military bases.

Then the operation in Iraq was condemned by the League of Arab States (LAS), noting that this campaign violates the sovereignty of Iraq and reflects the expansionist ambitions of Ankara.

In turn, Baghdad called on Ankara to "stop unilateral hostilities," while expressing the willingness of the Iraqi authorities to "cooperate in monitoring border security in the interests of both sides."

After that, Ankara has repeatedly reported the elimination of PKK militants in northern Iraq.

So, in early April, the Turkish Ministry of Defense announced the destruction of four terrorists by a drone strike.

As noted, an artillery strike was inflicted on their location in the Heftanin area.

At the same time, at the end of March, the head of the Iraqi Turkmen parliamentary faction, Ershat Salihi, warned that the PKK was strengthening its presence in the northern province of Kirkuk, which posed a serious threat to the local population.

"Away from the border"

According to the director of the Center for the Study of the Middle East and Central Asia, military expert Semyon Bagdasarov, the goal of the current special operation of the Turkish side in northern Iraq is "to defeat the PKK bases in the border zone."

“Ankara wants to push PKK fighters away from the border with Turkey.

Ankara will achieve PKK losses and defeat their border bases.

The operation will last several months, ”the expert said in an interview with RT.

Bagdasarov explained that such special operations are important for Ankara, since the military wing of the Kurdistan Workers' Party operates not only in Iraq and other countries of the Middle East, such as Syria, but also in Turkey itself.

“From Iraqi territory, the PKK can respond to Turkish attacks by firing at Turkish security infrastructure facilities.

At the same time, the main forces of the PKK are still concentrated in northern Syria.

In Iraq, their headquarters are also located in the northern part, exactly where Ankara is now conducting a special operation,” the analyst said.

Bagdasarov believes that the conduct of a new military campaign in Iraq is connected, among other things, with the internal political situation in Turkey.

“In 2023, Ankara will hold presidential elections.

And preparations for them one way or another are already underway.

Erdogan wants to show through a new special operation that he has solved a number of issues, that the number of PKK attacks on the gendarmerie in Turkey has decreased,” Bagdasarov said.

At the same time, he is confident that Ankara's current actions in northern Iraq against Kurdish militants will not lead to the complete destruction of the PKK.

“Erdogan is well aware that now he will not be able to destroy the PKK.

But the Turkish president intends to show his determination, to demonstrate that he is ready and willing to solve this problem,” the expert believes.

As Alexander Vavilov, a professor at the Diplomatic Academy of the Russian Foreign Ministry, in turn, recalled in a RT commentary, Turkey has been initiating special operations against militants of the Kurdistan Workers' Party in Iraq for a long time, since it believes that the Kurds are "first of all, terrorists who want to harm the Turkish regime ".

“Therefore, during the next military campaign of Ankara, it is unlikely that any surprises will follow from the Turkish side.

For Turkey, the fight against the PKK has already become a set of routine activities that have been going on for several years,” the analyst said.

Vavilov also assessed the starting positions of the PKK militants in Iraq and the potential of the Turkish army.

“Ankara has more power than the PKK group, since the Turkish state has extensive military capabilities.

But the Kurds do not give up, they continue to repel attacks and even sometimes go on the counteroffensive.

Therefore, the battles will continue for some time.

The Kurds are quite solidary with each other, the movement for Kurdish independence and independence has been developing for decades, ”the expert said.

“From time to time, Turkey feels a more urgent need to weaken the Kurdish ranks in order to secure their country accordingly.

When there is such an unstable region at hand, then, naturally, it is necessary to carry out such operations, which is what Ankara is doing, ”the analyst said.

However, Vavilov believes that Erdogan does not have far-reaching plans in connection with a new military campaign in Iraq.

“Turkey has rather narrow limits.

All hostilities take place mainly in the border areas.

This is a tactical, not a strategic operation to inflict further damage on the PKK,” he said.

Vavilov also said that the West would most likely not publicly react in any way to Turkey's operation in Iraq.

“There, Ankara has already become accustomed to such actions, and there will probably not be any special speeches on this occasion in defense of the Kurds,” the analyst noted.

At the same time, Vavilov believes that Ankara's military operation in Iraq, despite the goal of protecting Turkey from attacks by PKK militants, will not contribute to stabilizing the situation in the Middle East.

"This kind of action will not lead to an increase in the level of security in Iraq and in the region as a whole, where there are many pockets of instability - for example, in Syria or in other countries," the expert believes.

Vavilov is confident that the Arab countries will not support or, on the contrary, oppose Turkey's special operation in Iraq.

“These states will not act in either direction.

They have too many problems of their own, in particular those that have not yet been resolved after the “Arab spring,” the analyst said.

At the same time, Vavilov believes that, despite Ankara’s statements about its intention to conduct a special operation until the last Kurdish militant is destroyed, “this campaign will not develop for a particularly long time.”

“In Baghdad, such operations are perceived quite tensely, sometimes protests are made.

Therefore, the current campaign will end soon and Turkey will pause.

However, then such actions will still be continued, ”the expert said.

In addition, Vavilov did not rule out that the United States, which had close ties with the Kurds, could even now "surreptitiously begin to help" the militants of the Kurdistan Workers' Party.

“The Americans have quite tense relations with the Turks.

There are many differences on various issues.

Turkey is, of course, a member of NATO, but the Kurds are also an important part of American policy in the region.

Therefore, the US will continue to covertly support the PKK.

Especially in the conditions that have now developed in Syria, where without the Kurds it will be difficult for the United States to hold territories, ”the analyst concluded.