16th The crew of Shenzhou 13 on a 183-day space trip return to earth The manned flight mission of Shenzhou 13 was a complete success From Shenzhou 5 to Shenzhou 13 From "one person for one day" to "three for half a year" The pace of Chinese people going to the sea of ​​stars has never stopped Today, to 13 "Flying Heroes" and Pay tribute to countless astronauts who have been silently persev 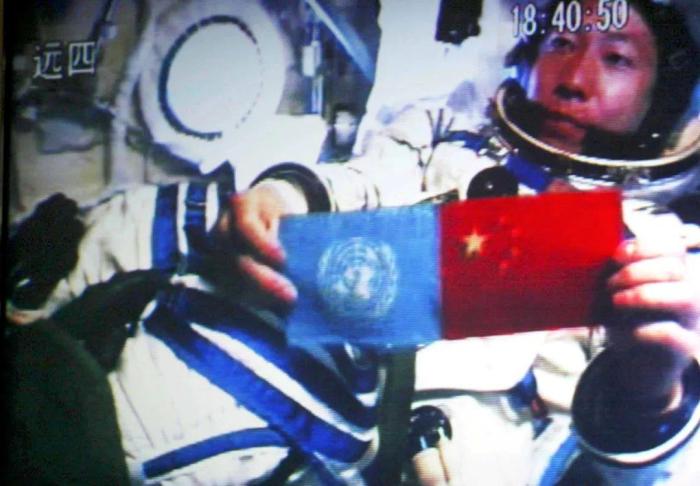 The manned flight mission of Shenzhou 13 was a complete success

From Shenzhou 5 to Shenzhou 13

Pay tribute to countless astronauts who have been silently persevering

After landing in the re-entry capsule

Yang Liwei stuck his head out

The first words spoken to the crowd were

"What foreign astronauts can do

Chinese astronauts can also do it.”

Take the Shenzhou VI manned spacecraft to fly into space

How do you let the ground know you're in good shape?

Foreign astronauts did a "forward roll" on the space station

So he boldly sat on the seat

Calculated at the speed of the spacecraft at that time

He "turned" about 351 kilometers per somersault

"What foreign astronauts can do

Chinese astronauts can do it too!

"As long as the country and the people need

I will move forward.”

The third expedition to space

Nie Haisheng said: "As long as the country and the people need

I will go forward

In the vast sky, continue to fly out of the trajectory of the Chinese dragon"

Take the Shenzhou 7 manned spacecraft to go to space

Hundreds of millions of people rejoice

In the vast space, Zhai Zhigang reports to the motherland

"I'm out of the cabin and I feel good!

Shenzhou 7 sends hello to the people of the whole country and the whole world!

We heard the familiar

"Even if you sacrifice, let the five-star red flag

In the process of China's first space flight

Encountered that the door could not be opened one after another

Prioritize the display of the five-star red flag

When someone asked "Worry about not coming back"

We also want to let the five-star red flag fly high in space!

In 2021, Liu Boming will fly to the Chinese Space Station

Completed the first astronaut out of the Chinese space station

△Liu Boming works outside the cabin

"Without dreams, the soul is 'weightless'"

And break many records of China's manned spaceflight

keep him on the ground

"A dream comes true, there must be another

Just like a man in space, the body will be weightless

Back to the ground, if there is no dream

The soul will be 'weightless'"

"As long as you persevere, you will get something"

"Shen Jiu" is a Chinese astronaut

For the first time, a spacecraft has actually been "piloted" in space

So far, China has become the third

Countries that have mastered space manual rendezvous and docking technology

For this day, "driver" Liu Wang has been preparing for 14 years

I actually only did one thing

is preparing for the fulfillment of his mission

I believe that as long as you persevere, you will get something

Whether it is a person or a deed, it will be refined into steel.”

"Three feet off the ground, regardless of gender"

After training, she couldn't help crying

Relying on the love for Feitian and the cherishing of opportunities

She did most of the scientific experiments

"Three feet off the ground, regardless of gender"

"Success is not only for the winners

It belongs to those who never give up"

But every time I miss the expedition to space

Looking back on the ups and downs in chasing dreams, Zhang Xiaoguang said

"The process of overcoming difficulties and setbacks

is a major part of our lives

Success is not only for the winner

It belongs to those who never give up"

Wang Yaping, who was still a pilot at that time

eager to get out of the atmosphere

In 2010, Wang Yaping was selected as China's first batch of female astronauts

The first Chinese female astronaut to leave the cabin

"You must dare to dream

"We're not here to rest"

Take the Shenzhou 11 manned spacecraft to visit the "Heavenly Palace"

Participated in up to 38 trials (experiments)

Local ground researchers advised them to pay attention to rest

"We're not here to rest

Our wish is to bring all the scientific and technological personnel

into the most effective data to bring back"

Tang Hongbo is the astronaut crew of Shenzhou 12

For him, compared to the daily hard training

The long wait before becoming an astronaut

more tempered his will

When the same batch of comrades flew in succession

In order to realize his dream, Tang Hongbo worked harder to improve himself

He often goes to the unit to read books on weekends

Except for lunch time, is researching materials

Waiting for this opportunity while studying"

It's on the way to fight to fly"

before being selected as an astronaut

Ye Guangfu is a pilot of a certain air force of the Air Force.

He is firmly committed to the manned spaceflight business

One of my country's second batch of astronauts

"Each of our astronauts

Not in Feitian, but on the way to fight for flight

Now, Ye Guangfu has realized the dream of flying

"I am proud to report to the motherland!"

The journey of the three astronauts has come to an end

But China's aerospace progress will not stop

Looking forward to the next ignition

Salute to the Chinese astronauts who continue to struggle!