C3: Eintracht defeats Barça and goes to the halves

Eintracht Frankfurt created a sensation on Wednesday by defeating FC Barcelona 3-2 after the draw in the first leg (1-1) to reach the semi-finals of the Europa League, where they will face West Ham, scorers… 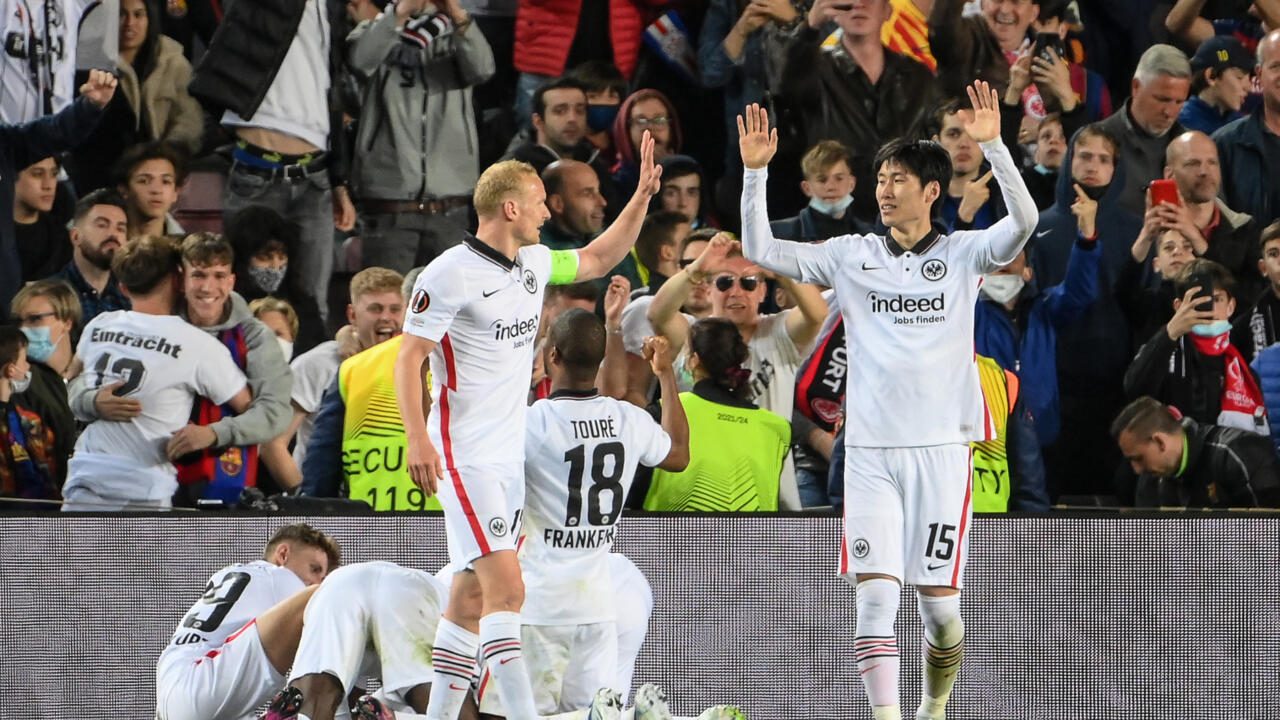 The Catalans gave in immediately on a penalty conceded in the 4th minute after a collision between Eric Garcia and Jesper Lindstrom and transformed by Filip Kostic, then a second time at half an hour of play on a sublime long shot signed Rafael Santos Borré (36th), before seeing their last hopes fly away on a cross shot from Kostic, for the double (67th).

The fine goal of Blaugrana captain Sergio Busquets, at the very end of the match (90th + 1) and the penalty converted by Memphis Depay after additional time (90th + 10), will have given only a vain and brief hope to the Catalans .

A major feat for this modest German club, currently 9th in the Bundesliga, which had not won a single match for a month (five draws and one loss), and which dreams of winning its first continental trophy since the UEFA Cup 1980.

And a huge first blow for Xavi, the Catalan technician called to the rescue of a Barça in distress in October and who had so far worked miracles with the Catalan group.

White tide in the stands

Driven by the 25,000 German supporters who invaded Barcelona and the Camp Nou (a third of the 79,469 spectators present), appropriating the Blaugrana enclosure as rarely seen before, the Eagles fell on Catalonia.

Eintracht Frankfurt supporters euphoric during the match against Barcelona in the Europa League at Camp Nou, April 14, 2022 LLUIS GENE AFP

From the 3rd minute, when an aerial ball fell, Eric Garcia held Lindstrom by the neck in the box: the fourth penalty conceded by the Catalans in two matches, after the three conceded to Levante on Sunday in La Liga (2-3 ).

It is also the most premature penalty goal conceded by Barça in all of its European history.

After having regained some color, in particular thanks to Ousmane Dembélé, Barça will experience a new low time at the half-hour mark, where Marc André ter Stegen will be alerted three times in a row.

And in the 36th minute, it was Rafael Borré who surprised the German goalkeeper with a sublime shot from outside the area.

Returning from the locker room, while the Catalan "ultras" deserted the stands for ten minutes in protest, Pierre-Emerick Aubameyang had the ball 2-1 at the end of his foot after an excellent cross from Dembélé... but he misses his recovery, while the cage was empty in front of him.

The disappointment of Barça players after their defeat against Eintracht Frankfurt at Cmp Nou, April 14, 2022 Jose Jordan AFP

At the hour of play, Ter Stegen postponed the deadline with a big save with his right hand (58th)... but the sentence would fall ten minutes later: after a touch, the ball reached the opposite lane in the feet from Kostic, who perfectly crosses his shot for the 3-0.

For his big return to Camp Nou five years after the famous comeback suffered by Paris Saint-Germain against Barça in the knockout stages of the Champions League on March 8, 2017 (6-1), Kevin Trapp did not have much something to do to defend his cage on Wednesday night, and was able to let his joy explode on this third goal.

For Eintracht, the dream continues.

For Barça de Xavi, excluded from the Champions League from the group stage in December for the first time since 2006, this new disillusionment will put a brake on the project of a great return to the European scene.

He will now have to secure a place in the top 4 of the Spanish championship to bring this young group to the Champions League next season.