A date for sale.. controversy in Egypt due to the establishment of a Ramadan tent in a presidential palace

An advertisement circulating on social media about iftar and suhoor offers in a Ramadan tent inside the historic "Qubba Palace" park in the Egyptian capital, Cairo, sparked widespread controversy in Egypt. 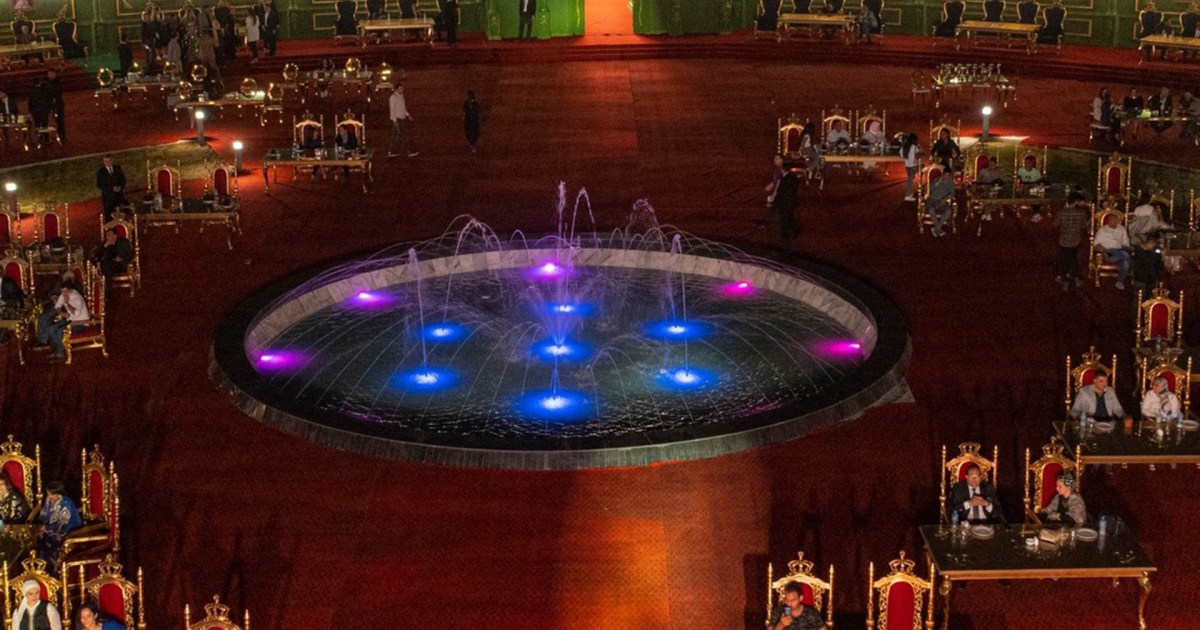 An advertisement circulating on social media about iftar and suhoor offers in a Ramadan tent inside the historic "Qubba Palace" park in the Egyptian capital, Cairo, sparked widespread controversy in Egypt.

A large number of social media pioneers attacked the idea of ​​establishing a Ramadan tent in one of the official presidential palaces, and some considered it a "sale of history", and a number of them demanded that the authorities stop the activity of this tent.

A Facebook page called "Al-Qubba Palace" announced what it described as "royal breakfast and suhoor in the Qubba Palace", which is presented to the tunes of the eastern takht and the skirt, "stand-up comedy" and various artistic segments, and the page showed clips For the restaurant located inside the palace, and pictures of a number of public figures who attended the opening.

is the largest palace in Egypt, and one of the most important royal palaces in the era of the Muhammad Ali Pasha family, and is currently used as a residence for senior official visitors to Egypt.

The Dome Palace is one of the largest palaces in Egypt. It was built by Khedive Ismail in 1873. It is currently a residence for hosting foreign presidents and others.

The funeral of King Fouad took place, including

in which the wedding ceremony of King Farouk and Queen Farida

The pictures and videos circulated sparked controversy among a large number of Egyptians, as most of them expressed their condemnation of the idea of ​​setting up a Ramadan tent in the palace, which witnessed a number of the most important events in the history of Egypt.

A number of them also expressed their regret for turning the palace garden into a restaurant, instead of turning it into a historical museum, as respected countries deal with their heritage and historical buildings, describing the event as "a sad evening for Egypt."

On the other hand, some saw that what is happening in the Dome Palace is normal and is held in different places around the world, and one of them cited attending a similar dinner in one of the historical palaces in Austria, while some demanded not to exaggerate the matter as the restaurant is just a decoration in the palace garden, without any prejudice to the palace or Its historical contents, and the presence of a limited number can not be exceeded.

Breakfast at the Dome Palace!

This is a sad evening for Egypt pic.twitter.com/qEEBADVbqY

Khedive Ismail, if he knew that the palace he built was still working during Ramadan nights, he would come out of his soil, he would be less than you, God 😂😂😂# Al-Qubba_Palace pic.twitter.com/RaLrRSxInV

1- I think it is clear from the picture that this is a decoration built in the palace garden.

3-I attended parties in Abdeen Palace and the Museum of Civilization, and it will be in the garden only without any prejudice to the palace or its furniture, and it will have respectable insurance and will be in a specific place that is not allowed to be exceeded.

By God Almighty, I was in Austria in the year 2000, a madam working, and they invited us to dinner in an ancient palace like the Dome Palace

, but we were sitting next to sober stone walls next to eating tables, and each one served himself and a musical band played next to us

, and this was a manifestation of luxury for them .

The Qubba Palace is located in the Saray al-Qubba area of ​​Cairo, and it is the largest palace in Egypt, with an area of ​​190 acres (the acre is about 4 thousand square meters). and plants.

The palace was officially opened in January 1873 at the wedding of Prince Muhammad Tawfiq, the Crown Prince of Khedive Ismail, and the palace was later associated with the legendary weddings and weddings of the royal family, and King Fouad I took it as his residence since 1925, and witnessed the marriage of King Farouk to Queen Farida in January January 1938.

After the revolution of July 1952 and the declaration of the republic that followed, the palace became one of the three main presidential palaces in Egypt, next to Abdeen Palace in central Cairo, and Ras El-Tin Palace in Alexandria.

Other than royal weddings, the palace witnessed many historical events, including the funeral of King Fouad in 1936, and the first recorded speech on Egyptian radio for his son, King Farouk, after his return from England after the death of his father, as it was the residence of the Shah of Iran, Muhammad Reza Pahlavi, after his political asylum to Egypt. 1979.