More than 20,000 cases of local infections in mainland China continue to be implemented in Shanghai

(Fighting against New Coronary Pneumonia) More than 20,000 cases of local infections in mainland China continue to be implemented in Shanghai   China News Agency, Beijing, April 6th. Comprehensive news: China's National Health Commission announced on the 6th that there were 1,415 new confirmed cases in mainland China on the 5th, of which 32 were imported from abroad and 1,383 were local. There we 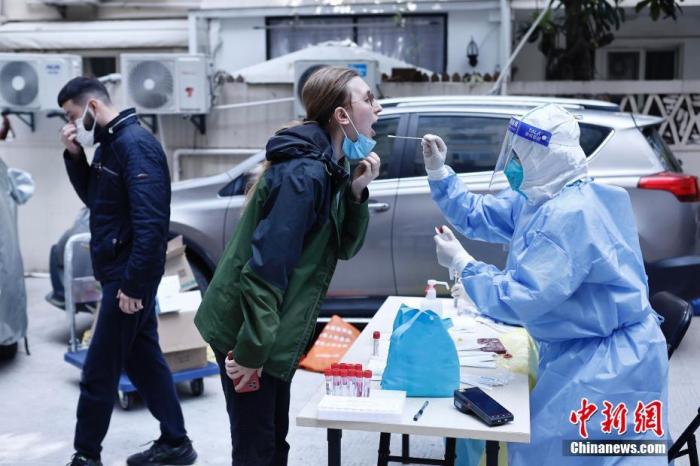 (Fighting against New Coronary Pneumonia) More than 20,000 cases of local infections in mainland China continue to be implemented in Shanghai

China News Agency, Beijing, April 6th. Comprehensive news: China's National Health Commission announced on the 6th that there were 1,415 new confirmed cases in mainland China on the 5th, of which 32 were imported from abroad and 1,383 were local.

More than 20,000 local infections in mainland China have increased by more than 170,000 since March

The rapidly developing Shanghai epidemic and the stubbornly high Jilin epidemic have made the number of local infections in mainland China increase to new highs.

There were 1,383 new local confirmed cases that day, exceeding 1,000 cases for 25 consecutive days.

There were 19,089 new cases of local asymptomatic infections, setting a new high for the number of local infections in mainland China, and the number of cases exceeded 10,000 for 4 consecutive days.

The above-mentioned asymptomatic patients were distributed in 27 provinces, of which more than 97% were from Shanghai (16766 cases) and Jilin (1798 cases).

China's National Health Commission said on the 6th that at present, community transmission in some parts of China has not been interrupted, and the epidemic is still running at a high level.

From March 1 to April 5, a total of 176,455 local infections were reported across the country, affecting 29 provinces. The overall epidemic range was wide, large-scale outbreaks were intertwined with sporadic outbreaks, and spillover cases and secondary outbreaks occurred frequently.

The epidemic situation in Shanghai and Jilin is still developing, and Shanghai continues to implement regional control

There were 17,077 new local infections in Shanghai on the 5th, the highest single-day increase since the city's outbreak.

Jilin, another province with a severe epidemic, has reported more than 60,000 local infections in this round of epidemics.

China's National Health Commission revealed on the 6th that the epidemic situation in Shanghai and Jilin is still developing.

Among them, the epidemic in Shanghai was at its peak, and there was a lot of community transmission, and it spilled over to many provinces and cities, and the prevention and control situation was very severe.

Shanghai announced on the 6th that from the statistics of nucleic acid screening in Shanghai on the 4th, the number of newly infected people is still at a high level.

According to a comprehensive study by experts, Shanghai will conduct another nucleic acid or antigen test across the city on the 6th.

Until this test is completed, the city will continue to implement zoning control.

The follow-up screening and prevention and control measures will be determined after all the tests are completed and the comprehensive research and analysis are completed.

Beijing held a press conference on the 6th to report that from 16:00 on the 5th to 16:00 on the 6th, 7 new cases of local infection were added in Beijing (5 confirmed cases and 2 asymptomatic cases), all of which were related to a clothing store notified recently.

So far, the "clothing store epidemic" in Beijing has infected 16 people, including 8 store staff, 6 family members and co-residents, and 2 other related personnel.

According to the Beijing Center for Disease Control and Prevention, the three infected persons in the clothing store epidemic reported by the city on the 4th all belong to the Omicron variant, which is homologous to the virus strains that have been uploaded in Europe, America and some Asian countries in February this year. Higher, but there are certain differences; the virus of infected people in Fengtai District reported on the 4th is highly homologous to the recent clustered epidemic virus outside Beijing.

The infected person returned to Beijing by plane on March 31, and it was initially believed that he was more likely to be infected outside Beijing.

Shijiazhuang City, Hebei Province reported on the 6th that 4 new cases of asymptomatic infections were added on the 5th in the city, all of whom were returned to Langfang for the construction of a makeshift hospital.

As the number of local infected people in mainland China continues to increase, the construction of makeshift hospitals has been stepped up in many places, and the number of related aid workers infected is also increasing.

According to a report from Shenyang City, among the 46 new cases of local asymptomatic infections in the city on the 4th, 8 cases were returned to Shenyang after the construction of makeshift hospitals in other provinces assisted by Liaoning Province.

In addition, among the local infected people recently reported in Harbin City, Heilongjiang Province, Qinhuangdao City, Hebei Province, and Anyang City, Henan Province, there were many people who aided the construction of Fangcang shelter hospitals.

Zhejiang Provincial Health and Health Commission reported that as of 15:00 on the 6th, the province has reported a total of 323 local confirmed cases and 208 asymptomatic infections in this round of epidemic.

The epidemic has spread to all 11 prefectures and cities in the province, and over 90% of it was directly caused by imports from outside the province. Among them, large truck drivers and other personnel who flowed across provinces have become an important factor in the spread of the epidemic.

Jiaxing City issued an announcement on the 6th, stating that the zero case of the "4.2 epidemic" in Haining was a 51-year-old homeless and beggar who entered Haining from a high-risk area outside the province on March 29, and was highly contagious. And refused to cooperate with the transfer work, the public security organs have opened a case for investigation.

Among them, the recent epidemic situation in Suzhou City has shown an upward trend.

Suzhou City announced on the 6th that from March 10 to April 5, the city has reported a total of 4 local confirmed cases and 226 asymptomatic infections, of which Kunshan has successively reported multiple positive infections.

In order to effectively stop the spread of the epidemic and cooperate with surrounding cities to fight the epidemic, Kunshan City has adopted stricter control measures for three consecutive days since April 6, and stopped all non-essential flows.