China News Service, April 4 (Meng Xiangjun) In the next 6 months, an additional 1 million barrels of oil will be released to the market from the strategic oil reserve every day.   On March 31, local time, in a statement released by the White House, US President Biden announced the largest release of oil reserves in the country's history.   The Biden administration's generous spending means tha 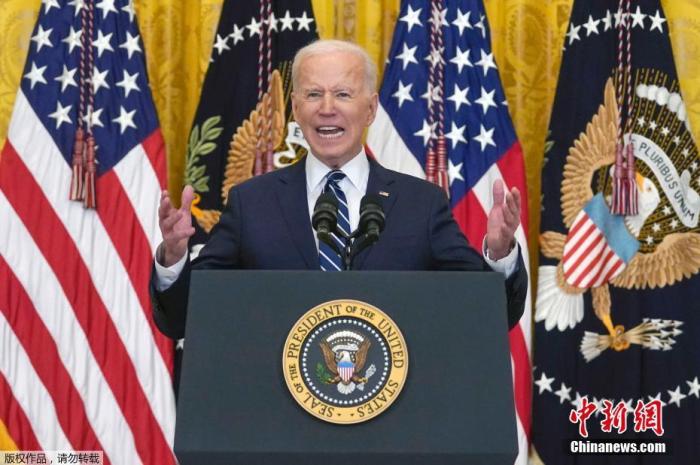 China News Service, April 4 (Meng Xiangjun) In the next 6 months, an additional 1 million barrels of oil will be released to the market from the strategic oil reserve every day.

On March 31, local time, in a statement released by the White House, US President Biden announced the largest release of oil reserves in the country's history.

The Biden administration's generous spending means that the United States will consume nearly one-third of its strategic oil reserves within six months, or a total of 180 million barrels of oil.

The Biden administration hopes that through this move, the high crude oil prices will "fever".

But can everything be as the United States wishes?

On the same day, Biden said the move was aimed at lowering "painful" gasoline prices.

"My plan will help ease today's pain and prepare for tomorrow," he said, adding that gasoline prices could drop "by a substantial amount," ranging from "10 cents to 35 cents a gallon."

The White House noted that the oil release would provide a historic supply.

These crudes will act as a "bridge" until U.S. domestic production increases by the end of 2022.

Strategic reserves refer to a country's planned establishment of reserves of materials, currency, energy, manpower, etc., in order to respond to wars and other major emergencies, to ensure the normal operation of the national economy and national defense needs, and will not be used easily.

But the Biden administration has used oil from the strategic reserve for the third time in more than a year since he took office.

The reason is the same, dealing with high inflation.

In the past six months, Biden has twice ordered the large-scale release of U.S. oil reserves, including 50 million barrels in November 2021, and another 30 million barrels in March 2022 when the U.S. announced a ban on Russian oil and gas imports. .

According to the U.S. Department of Energy, there are currently about 568 million barrels of crude oil reserves in the United States, the lowest inventory level in nearly 20 years.

Biden quickly set his own record.

The British "Financial Times" pointed out that the 6-month "oil release" plan will reduce the US oil reserves to the lowest level since 1984.

Biden believes that the conflict between Russia and Ukraine has caused a reduction in Russian oil supply in the international market, pushing up oil prices.

He also admitted that the US sanctions against Russia are "at a price".

He called on oil companies not to indulge in "record profits".

Data map: The Leondel Basel refinery in the United States.

Biden called on Congress to ask U.S. oil producers to increase production, and said he would seek to tax producers who hold public land drilling licenses but do not use them: Pay the fee."

So U.S. companies will have to choose whether to start producing or pay for it.

On the other hand, senior U.S. officials said they plan to replenish oil reserves after oil prices "fall back."

At that time, the U.S. Department of Energy will determine details such as price thresholds.

Oil could be replenished at $80 a barrel, a person familiar with supply plans said.

The price is likely to encourage shale companies to drill faster to increase supply in time for the stock release to end.

The White House has been negotiating with OPEC+ producers, including Saudi Arabia, to push for higher output.

However, the British "Financial Times" pointed out that the release of strategic oil by the United States is equivalent to acknowledging its ally in the Persian Gulf and does not intend to help itself out of the predicament.

OPEC, led by Saudi Arabia, once again ignored calls from Western leaders such as Biden to speed up production increases.

The US "Washington Post" previously analyzed that the relationship between the United States and the Gulf countries is "deteriorating".

The reason is that after the Russian-Ukrainian conflict began, the Biden administration believed that the Gulf countries' condemnation of Moscow was "not clear enough".

The United Arab Emirates and Saudi Arabia have long been dissatisfied with the United States' inability to decisively deal with the Houthi rebels in Yemen and the failure to fully consider the demands of the two countries in the Iran nuclear negotiations, and even refused to answer Biden's calls.

On March 6, local time, the average price of regular gasoline in the United States reached $4.009 per gallon, the highest average price since the summer of 2008.

According to Bloomberg’s analysis, OPEC+’s oil production has fallen below the target level due to the impact of the epidemic, but if the Biden administration’s actions have had the desired effect on reducing crude oil costs, it will definitely be met with resistance from OPEC+ member states, which may make it gradually Countries that had increased production to the expected target cut production again.

If OPEC+ decides that the U.S. is "bluffing," Washington's dominance of energy markets could face headwinds not seen since the 1970s.

[Price control may not be able to control]

Still, the most actively traded Brent crude is still well above where it was 12 months ago.

Indeed, oil investors are skeptical that the U.S. move will have a long-term impact on crude prices.

"History has shown that SPR releases are not particularly effective at controlling (oil prices)," said Pickering, founder of Energy Research. "It doesn't solve the structural problem of supply and demand."

Bloomberg also pointed out that the Biden administration should be careful: "The most powerful energy weapon in the United States may inevitably fall to the altar in the end."

It reminded the United States that 1 million barrels a day is an amazing number, and the amount of delivery is six times the previous record, and the effect is comparable to "pressing the nuclear button on the oil market."

But what if after pressing the "nuclear button", everything is business as usual?

According to Bloomberg's analysis, there will always be risks in deploying strategic oil reserve "weapons".

Historically, the effects have been mixed, with the possibility of both rising and falling oil prices after the launch.

Any stockpile releases will likely be in exchange rather than sale, and refiners will have to commit to replacing crude oil for years to come, plus a little more in interest.

In the long run, they take more crude from the market than they put in.

The deeper problem for Washington is that the Strategic Petroleum Reserve is not the only, most powerful protagonist in the play.

In the U.S. alone, six oil producers are producing close to 1 million barrels a day.

On May 11, 2021, local time, cars line up to refuel near a residential area in Charlotte, North Carolina, United States.

The U.S. legislature is also spurring demand for crude, promising to cut state gasoline taxes, a move that could offset the impact of any supply increase on prices.

In addition, there are also issues such as how a large amount of crude oil is digested in overseas markets.

As a "country on wheels", in the United States, where the road mileage reaches 4 million miles (about 6.43 million kilometers) and the land is sparsely populated, people are highly dependent on cars for travel, and their demand for fuel can be imagined.

Over the past year or so, global oil prices have nearly doubled, and U.S. fuel prices have risen by 50 percent, with inflation reaching the highest level in nearly 40 years.

The Biden administration is under tremendous pressure and has been attacked frantically by the rival Republican Party, and its approval rating has also fallen into a slump.

And 2022 is a midterm election year in the United States, which is crucial for Biden.

It is precisely because of this that Biden, who wanted to make a political achievement to restore public opinion, started the first round of the release of 50 million barrels of war oil in December 2021 before the start of the Russian-Ukrainian conflict, but encountered "Waterloo". .

MSNBC reported that Biden "missed" the opportunity to go all-in on the renewable energy transition.

In addition, the US Microsoft National Broadcasting Corporation (MSNBC) commented that after Biden's campaign and inauguration, he had promised to make the United States transition to clean energy. The occurrence of the Russia-Ukraine conflict has become a natural opportunity for the United States to cut into the green economy runway.

However, the Biden administration has made the opposite choice, calling for increased domestic oil and gas production in the United States.

It's all about votes, as voters unhappy with rising oil prices are the most likely to vote against the current government.

On March 8, Biden signed an executive order to ban the import of Russian oil, liquefied natural gas and coal. The average gasoline price in the United States rose immediately, breaking the record set in July 2008.

The U.S. ban on Russian oil has intensified the panic among global investors, causing European and American stock markets to continue to decline.

On March 9, the United States and other countries released crude oil to deal with the shock.

Fox News reporter Tucker Carlson criticized that global oil transactions are settled in US dollars, and the abandonment of US dollar transactions by many countries will cause huge losses to the United States, because the global financial system is the foundation of American wealth.

Carlson also pointedly pointed out that not only the Biden administration, but many previous administrations in the United States have printed money indiscriminately, leading to increased inflation and income inequality.

"What was supposed to save our economy ruined it." (End)