The most shining coordinates · a letter from home ② | The special "military medal" is shining 【Open Column】   "The motherland is the most solid support for the people, and heroes are the most shining coordinates of the nation." Since the 18th National Congress of the Communist Party of China, General Secretary Xi Jinping has paid tribute to heroes, told their deeds and praised their spirit. On t 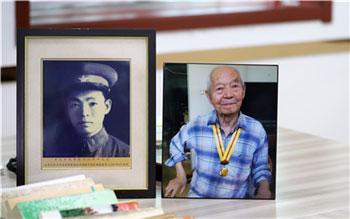 "The motherland is the most solid support for the people, and heroes are the most shining coordinates of the nation." Since the 18th National Congress of the Communist Party of China, General Secretary Xi Jinping has paid tribute to heroes, told their deeds and praised their spirit.

In the list of revolutionary cultural relics in the Gaoyang County Cultural Relics Protection and Management Office, Hebei Province, there is a special cultural relic - two blackened warheads.

Its speciality is not only that these two warheads came from the battlefield to resist US aggression and aid Korea, and have witnessed the turbulent years of war, but also because they have accompanied him through the "legendary" life of nearly 70 years in the body of veteran Li Jinghu.

Our beautiful life today is the result of the sacrifices made by countless lonely people like Li Jinghu.

On the occasion of the Qingming Festival, let us approach the veteran again through the family letter written by the veteran's daughter and learn about the extraordinary story behind it.

A native of Wangfu Village, Gaoyang County, Hebei Province, he participated in the War of Resistance Against Japanese Aggression, the War of Liberation and the War to Resist U.S. Aggression and Aid Korea.

On September 4, when the staff of the funeral home in the eastern suburbs of Beijing were collecting the ashes of the elderly, they found two warheads: one on the head and one on the waist.

These two warheads coexisted with Li Jinghu in his body for nearly 70 years and became part of the body.

After Li Jinghu's death, his daughters Li Wenxin and Li Su donated 2 bullets, as well as their father's medals, photos, manuscripts and other relics to their hometown as revolutionary cultural relics for permanent collection.

"These two warheads have been in my dad's body for nearly 70 years. Originally we wanted these two warheads to go with my dad, but then we decided to donate them. This should be the best place." Li Wenxin said so .

【The most shining coordinates · A letter from home】

The daughter of Li Jinghu, a veteran of the War to Resist U.S. Aggression and Aid Korea, cannot go to the grave due to the epidemic——

Write a letter to the family, and tell your father what's in your heart

How are you doing this time?

The weather is getting warmer during the Ching Ming Festival, so remember to reduce your clothes slowly.

The weather in this season is fickle, so don’t catch a cold. You should take care of yourself in life. We are not by your side, so you need to arrange your own life.

Dad, many years ago, we only checked out that you had one bullet in your head, but in your ashes (waist position) we found the exact same second one.

These two bullets have been in your body for nearly 70 years, and you have never heard of any pain or discomfort. I can't imagine how much pain you have endured for so many years and how you have persevered.

We all feel sorry for you and are touched by your spirit at the same time.

At the suggestion of my third brother (Ma Yijun), we donated these two bullets, together with your military medals, to our Gaoyang County Cultural Relics Bureau.

All you do is to create today's happy life for our descendants!

You are a hero to all of us.

According to your wishes, we sent you back to our hometown and buried you next to my grandfather, grandma and uncle.

Dad, your favorite set of "The List of Generals of the Chinese People's Liberation Army" is by your side. Do you still watch it?

During the six years that you were sick, you broke four books of "The Directory of Generals of the Chinese People's Liberation Army". You read it every day and read it aloud. You were so emotional about those generals, you just thought that you were happy at the time. Well, I realized later how much influence those old generals have on you.

Looking at those handsome photos of you back then, I can't imagine what you were like before you were injured. You can only learn a little from your diary and Uncle Wei Wei's article.

Sadly, we haven't seen it.

Your good times are dedicated to the country, and you have sacrificed a lot for our happy life today.

Do you still sing in your spare time?

You can sing all those revolutionary songs, but the one that sang the best was the "Battle Hymn of the Chinese People's Volunteers".

As long as it is a dozen beats, your mouth is this song.

You sing this song at home, in the park, and in the hospital.

The patients in the hospital love to chat with you, and they all know that you are a kind old man. They know that you can sing, so they let you sing. You always sing to everyone generously. The singing is so complete and loud, everyone applauds you after singing.

We are still in touch and talk about you often.

He has taken care of you for four years, especially during the epidemic, when you were in the hospital, we could not enter the ward to see you, but Master Du took care of you. In order to reassure us, he often took videos of you. It was our family to meet such a good person. lucky.

We are not by your side, you have to take care of yourself, look like you were when you were young, start over, and let us rest assured.

Dad, due to the epidemic, we can't go to the cemetery to sweep your grave, so let's use this letter to talk to you.

You are the father of our heroes!

You will always live in our hearts!